In a city filled with abundant healthy options, a third of the city is stranded in a stark food desert. Here's how things are starting to change.

On a quiet weekday morning, Fattah Muhammad drinks coffee at the McDonald's in the center of South Side Plaza while laying out a vision of crisis and doom. It doesn't involve the Pale Rider wreaking havoc in the parking lot. There's no mention of nuclear fallout. The James River hasn't filled with blood.

No, the 73-year-old imagines something far more mundane, but just as frightening in his mind: the abrupt closure of the fast-food restaurant in which he sits.

It sounds melodramatic, but Muhammad says he's seen it before.

"They closed this one McDonald's down for just a few hours one morning," he recalls. "People didn't know what to do. If you closed the Burger King over here and this McDonald's, there would be a panic."

In a neighborhood where residents have limited access to fresh, healthy food, they have come to rely on fast, cheap convenience foods high in calories, salt and fat. This is the double whammy of a food desert. The result is a health epidemic — obesity, diabetes and heart disease — that disproportionately strikes the city's most vulnerable neighborhoods.

With an array of new policy goals adopted this summer, the city for the first time is taking steps to ease the problem. The focus is to make it easier to grow food in the communities that need it. Proponents say urban agriculture is promising because it not only provides produce, but also helps neighborhoods rediscover fresh food.

Can these inner-city gardens really change the bleak reality on the ground? Surrounded by Egg McMuffins, hot-cake platters and the group of older men he meets here most mornings, Muhammad, a longtime activist in the black community, offers a blunt assessment that suggests change will be hard won.

"People can't cook," he says. "Even older people who used to cook, they come in here. ... I've got a grandson that if you put a decent meal in front of him, he just can't eat it. But a burger's no problem." 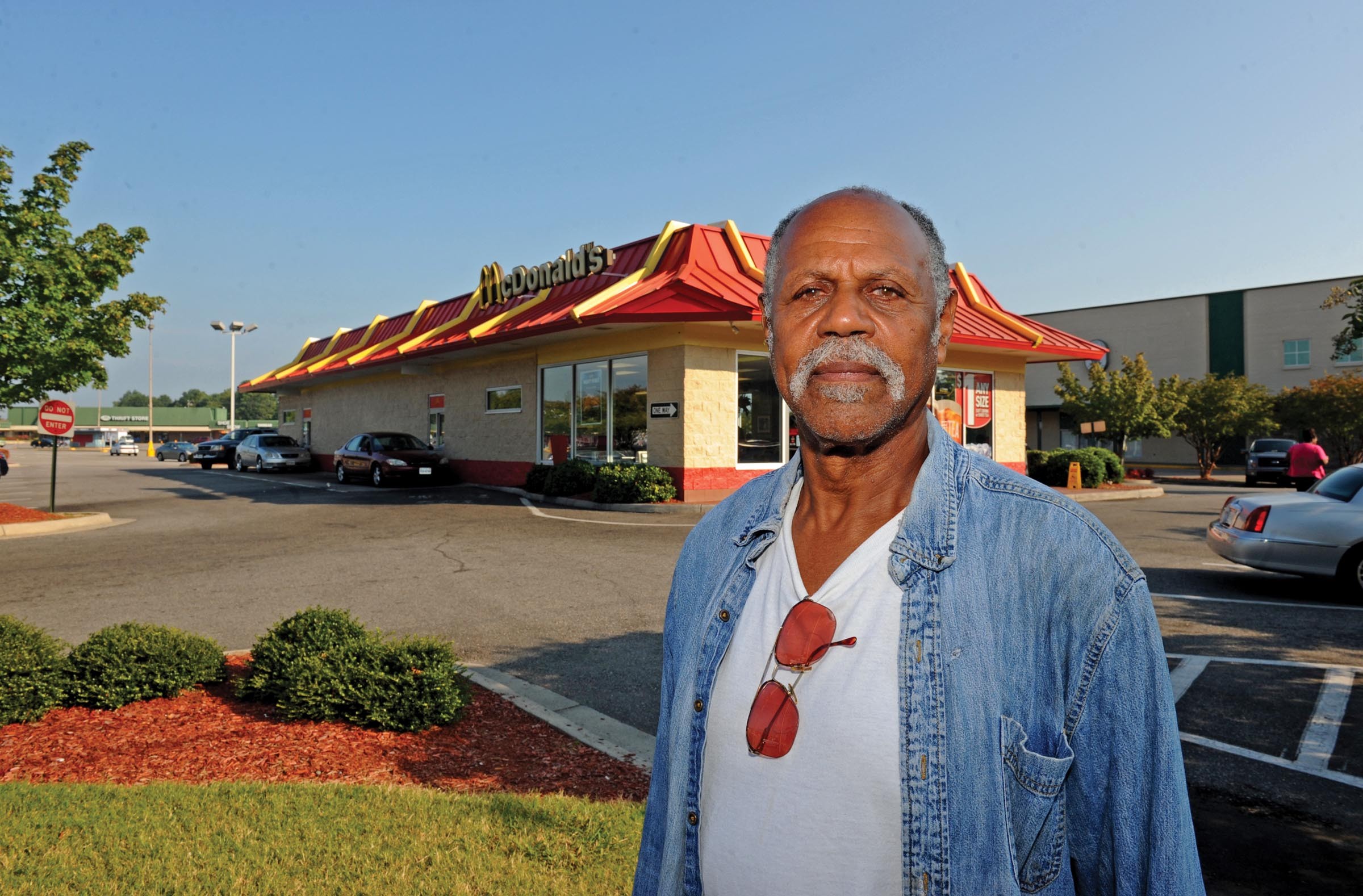 The idea that it could be difficult to find fresh vegetables — especially now in the waning days of the season — is difficult to appreciate if you have a car, or live in, say, Carytown, where a farmers' market and four full-service grocery stores exist within a five-minute walk of one another.

In pockets of the city like this, the bounty has never been greater. New local farms open every season. Markets where growers sell their produce proliferate. And the city's thriving independent restaurant scene earns national attention while cooking it all up.

But travel 10 minutes by car into neighborhoods to the north, south and east, and you'll find residents living below the poverty line who spend 20 minutes or more walking to the nearest store — perhaps a Family Dollar — where they do most of their grocery shopping in aisles lined with processed, boxed items and snack cakes. 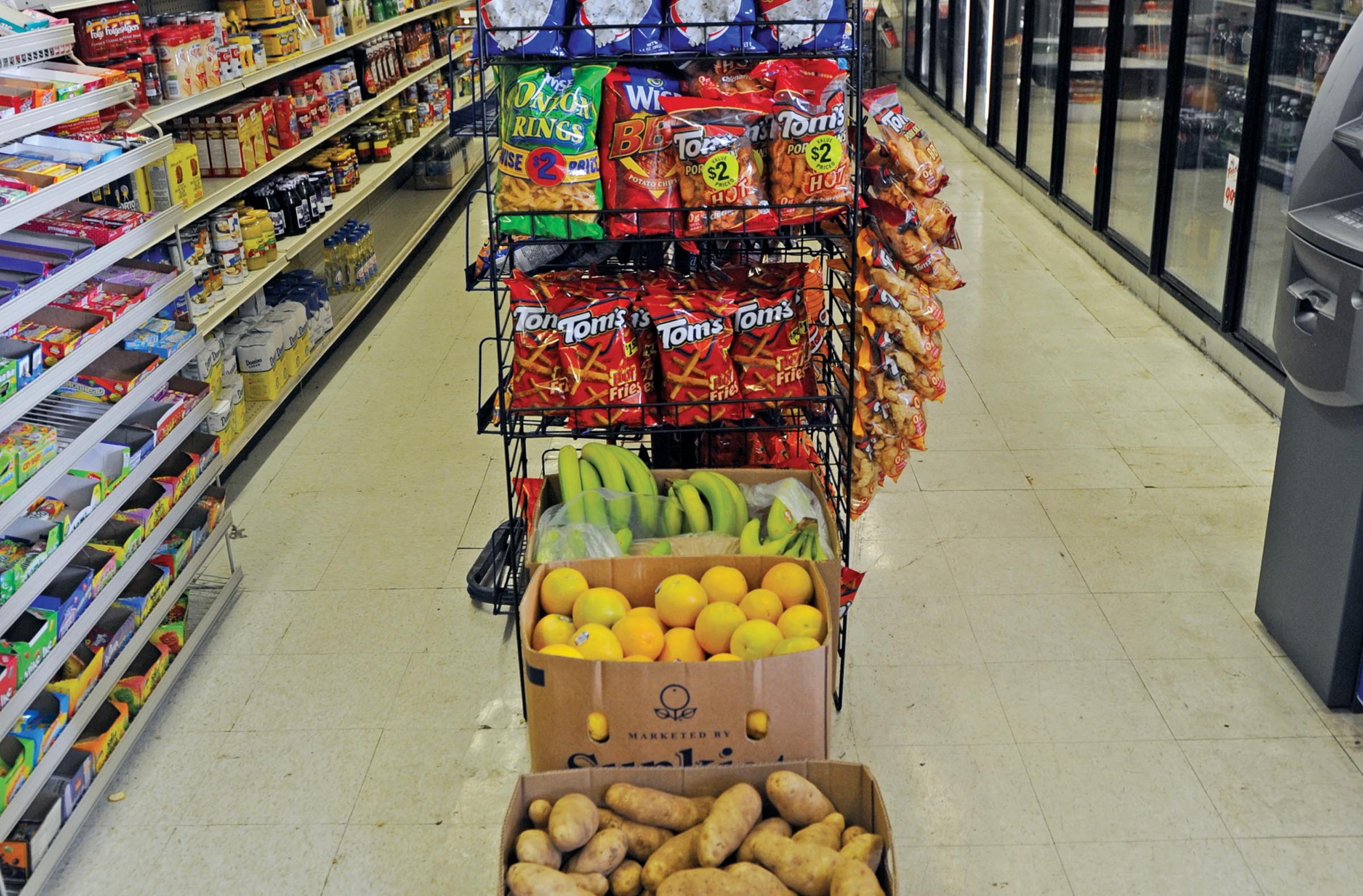 This disparity isn't news. Food deserts are areas defined by the U.S. Department of Agriculture as containing high rates of poverty and low access to fresh, healthy food. And the phenomenon has been written about in mainstream publications going back to 2009, when the agency first started classifying certain areas as such. In Richmond, one-third of the city's population lives in a food desert, according to city data.

What's changed in Richmond is that political and business leaders, most notably Mayor Dwight Jones, recently have made attempts to address the problem in a systematic way. Jones convened a task force in July 2011 to develop a food policy for the city. The body, which completed its work in July, brought together nonprofits, community activists and health professionals to examine the problem and suggest solutions.

The task force's report is wide-ranging, but focuses on making it easier to grow food in the city. Suggestions include eliminating irrigation fees for community gardens, making vacant land and buildings available for food projects, introducing edible landscaping to city parks, and getting gardens and food education into more schools.

So far, the city has acted on two of the group's recommendations: City Council approved an ordinance allowing residents to keep chickens, and the city has hired a food policy coordinator — Anne Darby, a planner for the Richmond Regional Planning District Commission. She's worked on the food access issue since the early 2000s, and like others with such experience, she's more optimistic than ever before. 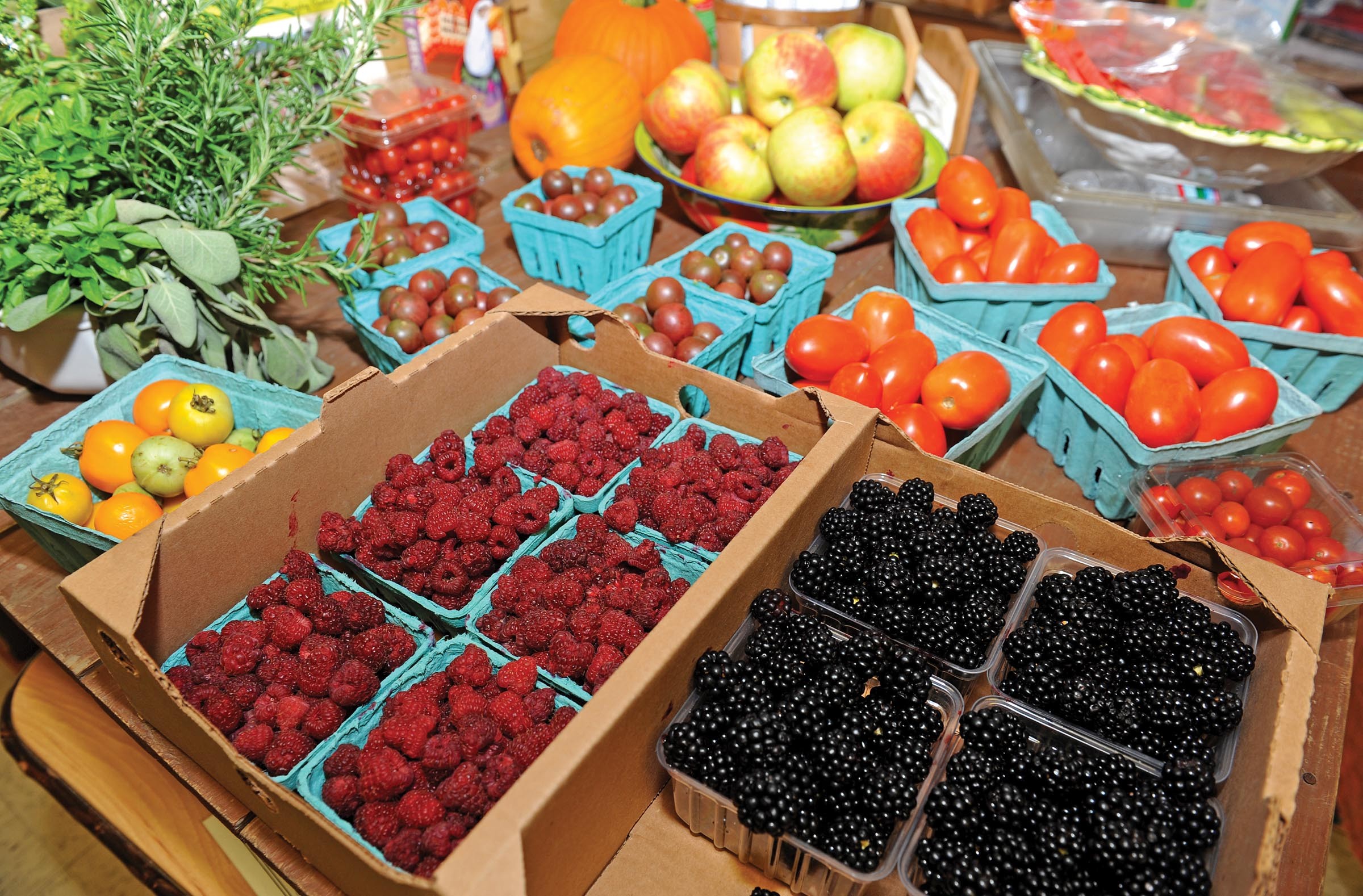 "Sometimes an idea has its time," Darby says. "There are a lot of people who have been working on this issue for a while."

She says the situation is tied to other trends that have predominated in the past half century: suburban sprawl, middle-class flight and disinvestment. "This is true of the Richmond region as well as most older U.S. cities," she says. "As high- and middle-income families began to leave urban areas, they left behind low-income families and decaying housing stock and infrastructure. Grocery stores followed the trend."

Darby says that although the tendency is starting to reverse in some neighborhoods, the problems it created here are far from being fixed. But with the support of political leaders and a general understanding of the problem, progress is happening in a meaningful way, she says.

Duron Chavis, a food task force member who started a community garden and operates a weekly farm market in the East End of Richmond, is equally encouraged.

"It's like a perfect time," he says. "Everybody's teased this issue as something that needs to be tackled and they're coming together to figure out how they can make a solution a reality." 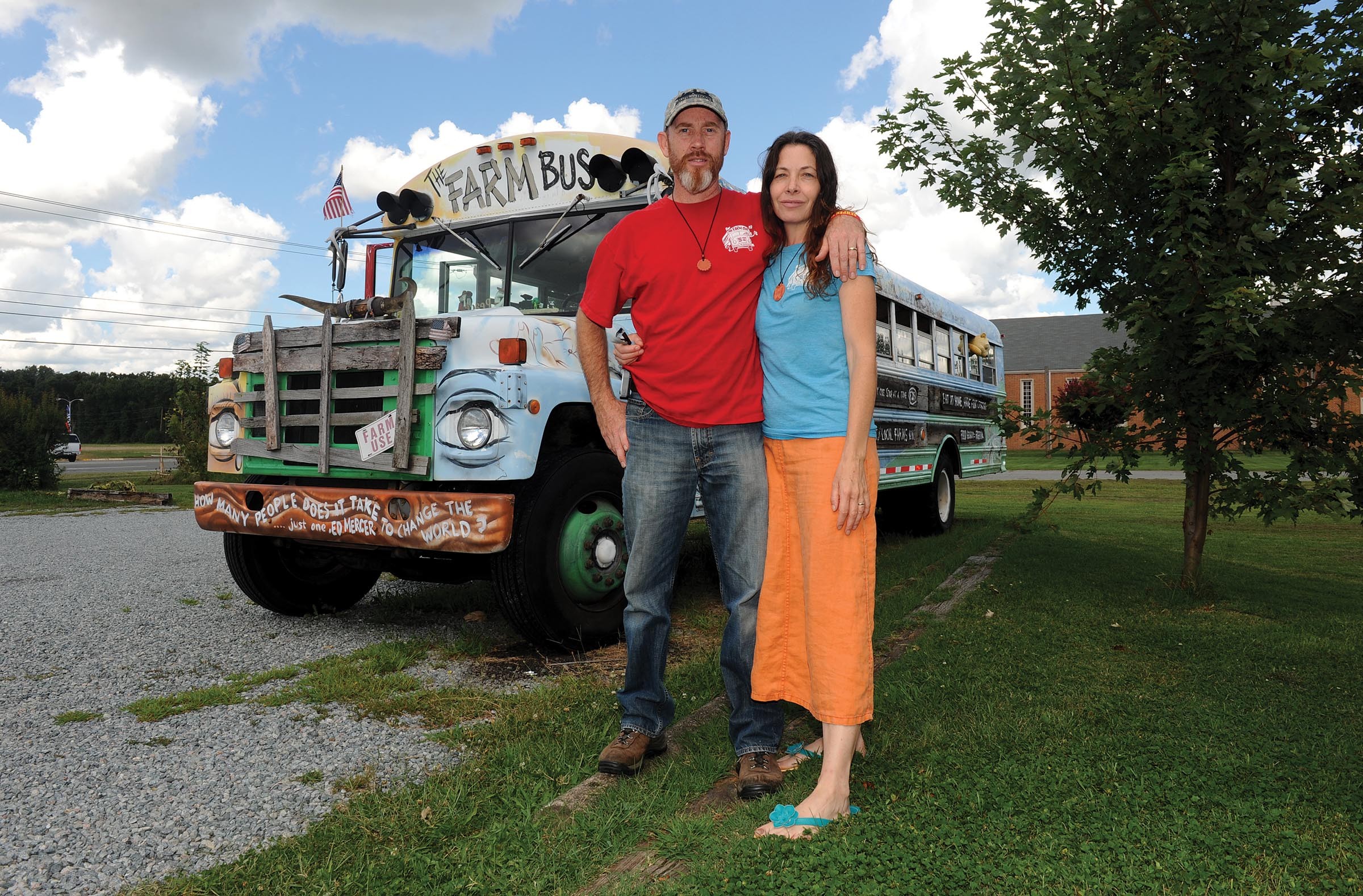 Amid the chips, soda and beer at Clay Street Market in Church Hill sits a small refrigerator. It's stocked weekly with tomatoes, eggplant, squash and peppers, all of which come from Tricycle Gardens, Richmond's oldest urban farm. The fridge and the veggies are part of an initiative the farm launched to introduce healthy food choices to corner stores.

Sally Schwitter, the farm's executive director, says the idea is to change habits by reaching shoppers where they already go and in shops that exist. No new grocery stores required. The project was launched in collaboration with the city health department and local business partners, including Dominion resources and CarMax. It's operating as a pilot in two stores, but the plan is to expand to six more next year.

On a recent Thursday, Schwitter drives from the farm's Church Hill headquarters down the street with a small basket of produce. On the way she points out the former Community Pride grocery store at Nine Mile Road and 25th Street. It closed in 2004 when the chain folded. Despite the city housing authority's purchase of the land for a new development in an effort to attract a new grocer, existing grocery chains have been unresponsive to city overtures. Major retailers — the kind that bring jobs and lower prices — historically have been unwilling to invest in lower-income neighborhoods.

Instead, the building that once housed Community Pride is occupied by a dialysis center. The symbolism isn't lost on Schwitter.

"The need for good, local food has never been greater, and Richmond is perfect for it," she says, "Every direction you go there's land available."

She pulls up to the market and puts the produce into the fridge. The manager, Sam Ali, says the food sells well, but demand isn't terribly high yet. The biggest part of the day's delivery is 11 green peppers. Schwitter isn't discouraged. She says education is just as important as getting the food in the stores and, to that end, the corner store program includes cooking demonstrations and tasting in the neighborhood.

"It's a real change to make a decision to buy collard greens or tomato and squash as opposed to potato chips," she says. "This is behavior change and lifestyle change and that doesn't happen overnight."

Shalom Farms in Goochland has a similar approach, but takes it a step further by bringing doctors into the mix. In partnership with Bon Secours, the farm fills prescriptions for produce given to hospital patients who live in Creighton Court. Every Monday, residents pick up their prescribed produce and recipe cards from a stand the farm sets up at the housing project. The farm also holds monthly classes that teach healthy cooking strategies.

Like the Tricycle's corner store initiative, it's an innovative program. But with enrollment capped at 15 households at a time, it, too, has a limited reach. 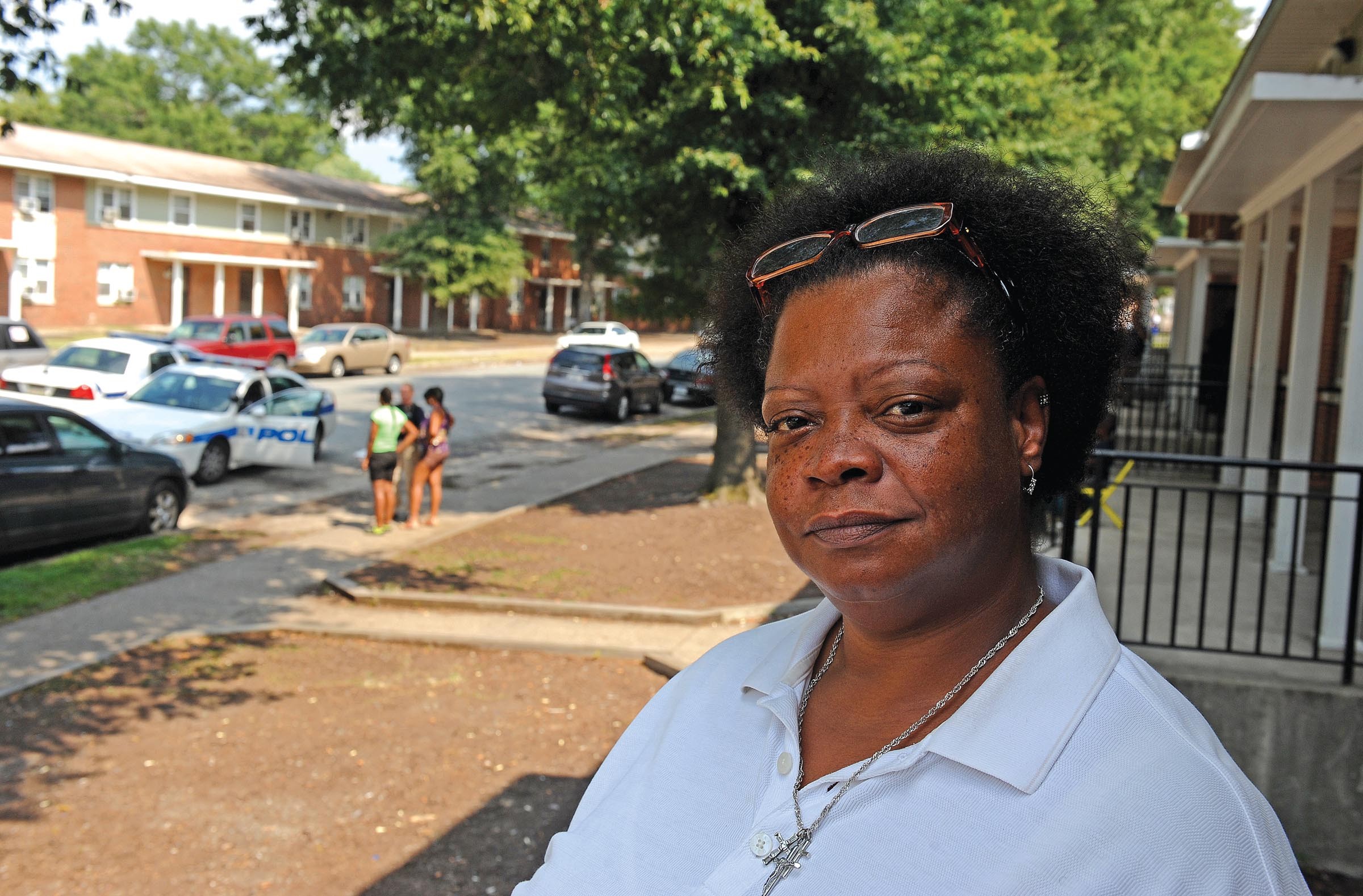 Cynthia Prophet leans over the edge of her front porch in Mosby Court, on the eastern side of Church Hill, just west of 17th Street. The retiree is waiting for a neighbor who's going to give her a ride to the grocery store — a Food Lion a few miles away. She says that unlike many of her fellow residents, she still cooks every night and loves vegetables — string beans, cabbage, corn, lettuce, and tomatoes.

"I cook just about everything," she says.

Residents such as Prophet say they aren't picky about where they shop. "I go pretty much wherever anyone will take me," she says. But she and others say they avoid the small grocery store, Community Supermarket, down the street, which has vans to transport residents and their groceries home if their bill comes to $40 or more. She and other residents say the prices are high and selection poor.

Prophet likes the idea of being able to buy fresh produce in her corner stores, but questions whether a garden would last in a neighborhood like hers. "It does make sense," she says. "But good luck trying to do that in this community."

Privately, some members of the food task force question the committee's focus on urban agriculture over measures they consider more realistic.

One member notes that the report includes a proposal for GRTC buses to take residents to farmers' markets, but includes no suggestion that GRTC adjust routes to make it easier for riders to get to conventional grocery stores. Independent of the task force, the city started running "shoppers' shuttles" in February 2012 to take residents from the city's various housing projects to Wal-Mart on the three days of the month that food stamp accounts are replenished. Since the shuttles started running, data provided by the mayor's office shows they carried residents on a total of 2,746 trips — though ridership can range from zero to 20 riders on any given day.

Another member questions the group's focus on the chicken ordinance that passed earlier this year, noting that eggs already are cheap and readily available in most neighborhoods.

But Darby, the city's food policy coordinator, says the task force's focus on urban agriculture offers benefits that plopping a grocery store in the middle of housing projects don't. "An urban agriculture project with a farm stand that teaches people about fresh food and how to grow it — that aspect is huge," she says. "At the same time, you're basically revitalizing what would otherwise be vacant land. And fostering interaction between agriculture and the community that you don't find with a grocery store."

Task force member Danny Avula, deputy director of the Richmond City Health Center, says he understands the criticism, but a problem this big requires more than one solution. "It's all of these things," he says. "One project isn't going to solve obesity, but in concert, all of these different ideas will start to move our culture in the right direction."

Chavis, the food task force member and community garden activist, echoes that idea: "Urban farms, community kitchens, farmers markets — it's basically about changing the culture. By putting these things in the community, you've already shifted someone's relationship with food. Grow strawberries and a kid who never tried one before will say, 'Oh, fresh strawberries in the neighborhood.'