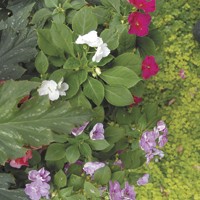 It's all "Wizard of Oz" and stuff back there. During the urban shvitz that is summertime, color seems to drain right out of the world, lost in that Kansas-like haze. But down a random Fan alley, bordered by trees and flowering bushes in pots of varying sizes, a well-established wisteria climbs along a fence, its woody vines like clubs. Through an arch is the Technicolor garden of Bob Mooney.

It's impeccable, really, the Armani suit of gardens, and Mooney seems to share that quality. Though it's 1,400 degrees out here, Mooney wears a long-sleeved white shirt and appears to be impervious to the weather, as he feeds his fish in the meandering pond and talks about how to keep a garden composed through all the seasons.

"A lot of year-round gardening to me is maintenance," he says. "We've picked a lot of material that sort of stays in bloom year-round." The "we" in question is Mike Diller, resident garden expert, who emerges from behind a potted hosta that looms like the 7 1/4th wonder of the world in a corner of the yard. Diller, Mooney's partner in horticulture through 20 years and four houses, pulls in a lot of the plant material in this yard, bringing in some strange specimens from, primarily, Smallwoods Nursery out in Amelia. He's sweating in his Armani suit.

At first glance, there's a lot that's working here: the array of textures and sizes and shapes, from stiff evergreens to tiny ground cover to the ever-growing hosta; the placement of pots to create a sense of flow and direction; the varying heights of plants that keep the eyes from dragging along the ground; and the shade, which falls over about half the yard but never disappears entirely. In one corner, a Japanese maple hangs over the pond, which is fed by a fountain that winds through the various pools. The pond was originally one pool, which Diller and Mooney expanded through a series of doglegs to break up the garden space. The koi and goldfish wind through it all and occasionally saunter over for an offering from Mooney's endless handfuls of fish food.

It's sort of like living in a mai tai, isn't it? It seems there are ways to approach this level of perpetual finery, even if there's no way you can pull off the white shirt at this time of year.

Mooney has two strategies for keeping the garden swell: (1) using small, slow-growing plants, and (2) changing out the planters frequently, three or four times a year.

Look at the wardrobe of just one of his pots, the one that has a good view of the pond: In fall, he and Diller use pansies and violas, which flower through the winter months (kept company by the yews and other evergreens lining the fence like sentinels). In spring, they bust out their secret weapons, a variety of coleus that "just get gargantuan," Mooney says, along with million bells (Calibrachoa). By summer, they call in the annuals, which keep them busy till fall.

Another trick is to get your money's worth from the blooming cycles, like using white jasmine, which flowers up three times a year. Starting with the surround-sound wisteria, Mooney says, "at any one point in time, something is in bloom."

Mooney and Diller are also pretty sly about where they put color. They've put brighter colors, like the intensely green Lysamachia ground cover, in the shade, where it won't burn out the eyeballs, and "cooler" colors, like evergreens and the coleus, in the sun. And sure enough, it balances out. Those cooler colors, especially the variegated ones, tend to be brighter at night, too.

But what about yonder alley --what's with that? The passage between the Mooney house and the condo next door is lined with more pots, more plants of varying heights. This creates an interesting leafy corridor, not the kind of path where you'd be attacked by cannibals; more like the kind of place where you'd set up a row of tables and have a dinner for 40, which Mooney and his wife have done.

Here we see one of the most interesting of the gardening duo's tricks, a trio of wildly textured plants arranged in one pot: There are two begonias, My Special Angel and Angel Wing, and Alternanthera. At first glance, they have as much in common as the rabbi, the priest and the water buffalo that walk into a bar, but when you focus on the arrangement, you'll see that all three share an identical pink, either flecked on the leaves or poking through on small flowers.

Which leads us to the big secret that powers this operation — plants are chosen for their leaves, ever reliable, rather than the fickle flowers. Leaves you can count on. Flowers — don't ask them to change your oil.

And Mooney points out one other thing that really works about the place: Wherever you look, it's a completely different scene. Rather than a big sprawling yard with a similar view, there are tons of unique vignettes, depending on your angle of approach and urgency to get out of the sun.

The best suits are fitted too.

Light: When designing the garden, consider where light will fall, not just from morning to evening, but through the seasons.

Context: Consider what plants play well together, and the overall effect of seeing a certain annual with a perennial that has a bad reputation.

Contrast: When thinking of the context, group distinctive plants to emphasize the traits of each, like the big-leafed hosta with the small Lysamachia. Remember, brighter plants will look better in the shade, especially with cooler blue and green plants placed in the sun.

Size and Texture: Think of the visual interest of differing leaves, like big waffle leaves with small smooth ones.

Verticality: Build the garden with a variety of heights in mind, grouping taller trees with midsized bushes, bushes with ground cover, and so on. Don't let the eye rest at one level. HS