Champion Appetites: Nine Days of Bike-Related Eating and Drinking Toward the Finish Line

Scott Elmquist For dinner after the races, Sabai’s pla nung manow, a whole steamed fish in a garlic, chili and lemon-cilantro broth, will make you feel healthy and virtuous even as it surprises the palate.

Saturday, Sept. 19: You’re going to need some fuel. You’ve probably gotten up way too early in order to secure a good viewing spot for the first race at 9 a.m., out at Lewis Ginter Botanical Garden. On your way, you’ll find cloud-soft, flakey biscuits that are the perfect launching pads for butter and ham at Early Bird Biscuit Co., 5411 Lakeside Ave. Later, speed downtown to have a drink and watch the riders all over again when they loop to Broad Street. Around the corner at 23 W. Marshall St., Saison will serve the Finish Line, an Americano cocktail with mole bitters, Cynar, Cocchi vermouth and soda. Owner Jay Bayer says to think of it as a low-alcohol refresher that keeps you upright and able ride your bike home.

Sunday, Sept. 20: Sleep in. You deserve it — it was a lot of excitement yesterday. Focus on lunch instead of breakfast. Although choices abound when the wheels hit the pavement on the Boulevard, keep it simple and stop at Buz and Ned’s Real Barbecue at 1119 N. Boulevard for some pulled pork and the best potato salad in town. Add a grape Nehi and stamp the South’s identity across your lips. For dessert, head down the street to Sweet 95 at 3312 N. Boulevard and enjoy some live music. A Homestead Creamery peach ice cream cone will cool you down during this strenuous day of spectating.

Monday, Sept. 21: After the team trial circuit ends its frantic pace across the Manchester Bridge, you’ll want to think about dinner. While you’re in that part of town, plunge into Oregon Hill and stop at L’Opossum. You aren’t the one who’s racing, so dump the carbs you crave and fill up on protein. Try the Hollywood Bone Yard: Chef David Shannon artfully arranges a barbecued lamb chop, ribs and a chicken drumstick all on one plate, with pears and greens to keep it healthy. Or you can hang at Shoryuken Ramen at 900 W. Franklin St. and throw back a few refreshing Tokyo Bike Lanes, which contain Hardywood Park Craft Brewery Pils, lime juice and house-made ginger beer.

Tuesday, Sept. 22: Those Tokyo Bike Lanes last night snuck up on you, didn’t they? Black Hand Coffee Co., at 3101 Patterson Ave., can pull that vital double espresso to get you through today, and you can also buy a pound of its Champion’s Blend roast, an homage to the races, to take home. And who said you shouldn’t drink during the day, especially with a hangover? Right off the race’s route, the Black Sheep, at 901 W. Marshall St., has a nice little patio where you can grab a Tandem: a Tecate with a shot of either tequila or whiskey on the side. 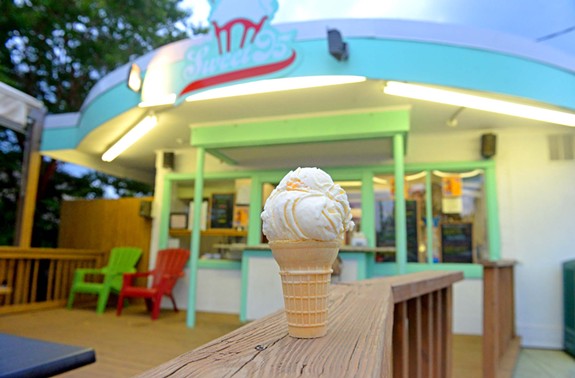 Wednesday, Sept. 23: Don’t let your spirits flag — you’re still in the middle of this thing and you need to keep on cheering. Chez Foushee at 203 N. Foushee St. will decorate its space with wheels and bikes, plus international flags on every table. Stop by at 5 p.m. for its 5 at $5 special — apps, salads, desserts, house wine and rail cocktails, all $5 each. Later, walk off that double chocolate mousse torte and head to Julep’s New Southern Cuisine at 420 E. Grace St. — its new location — when all the hoopla dies down. You can cap off the evening with a Flaming Wheelie, containing Remy Martin V, Ancho Chili Reyes, peach syrup and a jalapeño and lime, with Peruvian sweety drop peppers as a garnish.

Thursday, Sept. 24: It’s pizza time. The folks at Dinamo, at 821 W. Cary St., are not only throwing a few pies at lunch and dinnertime in addition to its fall manu, but also teaming up with bike apparel company Rapha. The two businesses will hang out under a tent in the lot next to Sweet Frog at 815 W. Cary St. — there’s plenty of seating — to broadcast the race while pouring beer and wine. Later, get in your car and park with quiet confidence in Carytown at 2934 W. Cary St. to try the Daily Kitchen & Bar’s Jim Moore, a Beefeater London dry gin cocktail named for the Englishman who was originally thought to have won the first cyclist road race — it’s up for debate — and in 1869, definitely won the first road race to span two cities.

Friday, Sept. 25: Stay put — you’ve done enough running around. Sit back at Sabai, a few blocks from the race at 2727 W. Broad St., to enjoy pla nung manow, a delicate, whole steamed fish in a garlic, chili and lemon-cilantro broth. Cool off with Sabai’s startling Career cocktail made with Navy Strength gin — that’s the strong stuff — green chartreuse and a splash of orange bitters. Later that night, if the momentum of the week insists upon pressing you onward, get far away from the madding crowd — with road closures — and sip a Derailleur made with champagne, Aperol and St. Germaine at Millie’s, 2603 E. Main St.

Saturday, Sept. 26: At Capital Ale House, located at 623 E. Main St., it’s the first day of Oktoberfest — renamed Biketoberfest in honor of all the jerseys wheeling by. Live music will be provided by a polka band, the Continentals, and you can watch the Hirschjäger Dancers while you try a little currywurst, sauerbraten and jaegerschnitzel as you decide what to drink from more than a dozen German beers available. For late-night snacking, upgrade from wings at the Betty on Davis at 805 N. Davis Ave. and order its smoked drumsticks served with locally made barbecue sauce, Cannon’s Pig Paint, and house-made blue cheese dressing.

Sunday, Sept. 27: Feel the spirit at the Underground Kitchen’s Fire & Brimstone gospel brunch with Julep’s chef Matthew Tlusty at the Plant Zero Pavilion in Manchester. It culminates the nine days of the series — with special dinners every night — running throughout the race. After all, Sunday should be a day of rest. And singing. theundergroundkitchen.org.