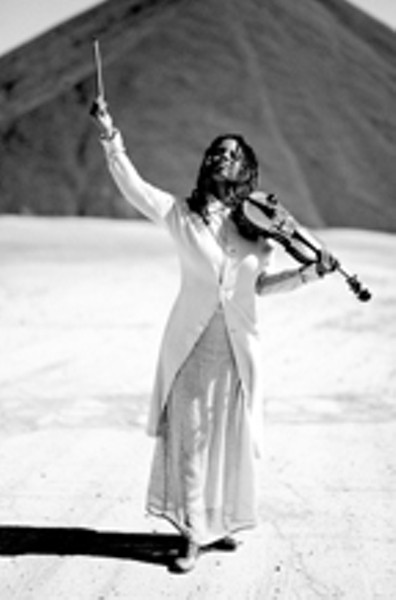 It’s the kind of breakthrough success that comes with a lifetime of preparation. “Recently I’ve been very busy, and it’s been really good,” Carter says, “but I feel like my progress has been slow and steady, just chipping away.”

Perhaps so, but earning the opportunity to play Paganini’s instrument has to count as a pretty big chip. Paganini’s virtuosity was so uncanny that, like bluesman Robert Johnson, he was rumored to have sold his soul to the devil. (“They had marketing even back then,” Carter notes.) His violin, the Cannon, is a masterwork created by one of the last of the famous violin-making family, the Guarneris.

“It’s very different,” Carter says. “It is much bigger than my usual violin, the string lengths are longer, and it’s a big physical workout to play. The sound is a lot darker, and very loud. You don’t find that today. It was magnificent.”

Carter played the Cannon first in Genoa, Italy, and later at Lincoln Center. She remembers demonstrating its power to the American audience, first playing a few bars on her usual violin, then on the Cannon. She said the audience gasped at the first note.

But playing a musical treasure, so valuable that armed bodyguards always flanked it, required some adjustment in Carter’s intense, percussive rhythmic style. The selections were constrained to mood pieces, and impressionistic classical compositions. The concert is recreated on the best-selling CD “Paganini After a Dream” (Verve), but, in Carter’s opinion, the essence of the instrument eluded digital capture. “You can’t get much off a recording,” she reflects philosophically, “sometimes not even emotion. It’s unfortunate, but I was happy to have done it.”

For Carter the distance between modern jazz and a classical musician is not as far as it might appear. “You have to consider that Paganini was an improviser,” she says. “To me it’s just a matter of coming full circle.”

The international acclaim hasn’t gone to her head. “It helps to have a good publicist,” she says. “There are a number of great jazz violinists that are still with us. Joe Kennedy Jr., who’s from your area, Claude “Fiddler” Williams and Johnny Frigo. We should be celebrating them.”

Carter’s appreciation for the tradition is rooted in Detroit, whose ethnic diversity has been fertile ground for musical development. Arguably her best CD is “Motor City Moments,” a homage to her hometown influences, including Motown, whose distinctive sound was created by musicians from Detroit’s thriving jazz scene.

Something of a child prodigy, surrounded by styles ranging from soul to sonata, she was inspired to follow her current path by the playing of Stephane Grapelli; a performance by the legendary gypsy jazz violinist was the first live concert she attended. Her combination of lyrical technique with an omnivorous appreciation of a wide spectrum of musical styles makes her equally at home in a straight jazz session, accompanying pop singers like Mary J. Blige, or bowing swinging improvisations on a legendary instrument in front of a classical audience.

Carter and her quintet (including local hero Alvester Garnett) have no set program for their two nights in Richmond. The plan is to be spiritually open, to try their best to connect and hope for the best.

For Carter, taking risks is more rewarding than taking credit. “Playing jazz, nothing is steady,” Carter says. “But then what is safety? I get so much pleasure just to be able to step out on stage and create.” S