Several events will honor the 50th anniversary of a historic Richmond civil rights event this week. 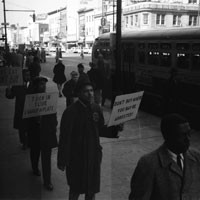 Several events will honor the 50th anniversary of a historic Richmond civil rights event this week. The program, titled “Sit In/Stand Out,” will feature conferences at Virginia Union University and special arts events, including a world premiere performance by Amaranth Contemporary Dance, at CenterStage. The celebration will culminate in an appearance Feb. 22 by national recording artist John Legend.

“At first, there was very little traction for this event and we had focused it around just a simple marker dedication,” says “Sit In/Stand Out” chairman Jeff Sadler, a member of the associates board of CenterStage, the original site of the Thalhimers store where 34 VUU students staged a famous protest sit-in Feb. 22, 1960.

Elizabeth Johnson Rice, one of the original protestors, helped to broaden the focus when she teamed with Elizabeth Thalhimer Smartt, the granddaughter of one of the Thalhimer brothers who ran the store at the time of the sit-in.

“These two had formed a friendship several years ago and had discussed the planning of a 50th anniversary commemoration” Sadler says. As for John Legend's involvement, you can thank Loudon County entrepreneur Sheila Johnson. “She introduced us to John Legend's personal manager,” Sadler says.

Starting Wednesday, more than a dozen surviving members of the Richmond 34 will participate in special conferences (a $250- to $300-per-plate luncheon will be held at CenterStage to help defray costs); they and the other protestors will be honored by name on two granite markers donated by Grappone and Sons.

For detailed information on the week's events, go to http://www.vuu.edu or http://www.richmondcenterstage.com