Center of the Universe Rolls Out the Ever-Changing Chameleon IPA 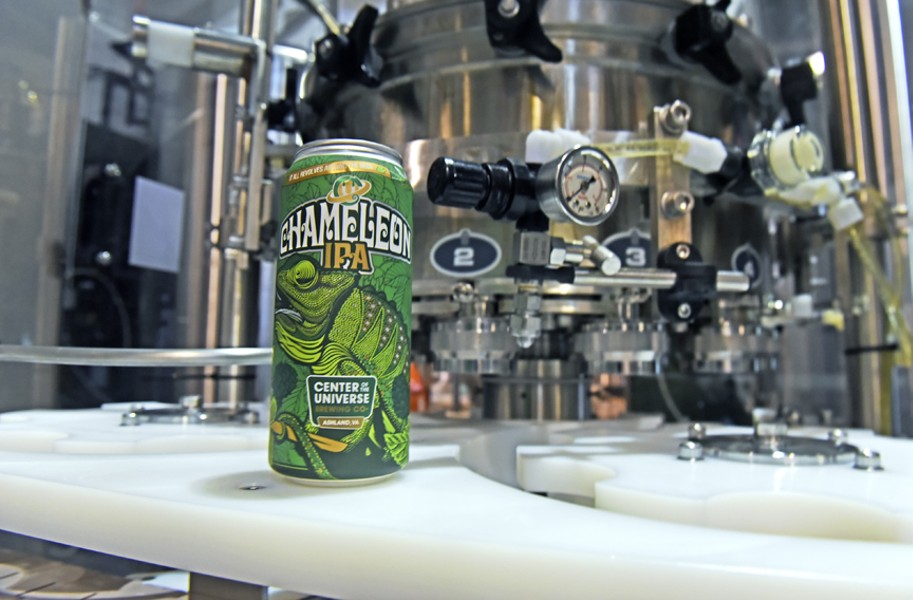 Like the color-changing lizard, the newest year-round beer at Center of the Universe Brewing Co. will change — not in response to the vicissitudes of the environment or the market, but on a six-week schedule beginning March 9.

Brewers will use different hop blends for each version of the Chameleon India Pale Ale, while maintaining a consistent grain bill. Because of the wide range of hop varieties, the beer's aroma and taste will change with each version. And so will the color of the cans.

Using colors to differentiate the versions rather than numbers, says co-owner Chris Ray, allows the brewery to repeat a beer. And by making smaller-batch IPAs, says his brother and co-owner Phil Ray, they can access scarce specialty hops.

"We haven't released a year-round beer since Chin Music [in 2014]," Phil says. "This enables us to change up our portfolio and allows our brewers to flex their creative muscles."

"Whenever you can keep yourself on the top of someone's mind, it's good," he adds. "It's a way for us to add a changing IPA to the market."

The India pale ale style continues to grow in popularity according to the 2017 state of the industry report from the Brewers Association, the trade organization for small and independent brewers. IPAs made up roughly a quarter of total craft beer sales in 2016, up from 22.6 percent in 2015.

Classic IPA style can be traced back to 18th-century England. Though hops' bitterness has long been used to balance the natural sweetness of malts, British brewers learned that adding more hops helped preserve the beer during the long export to India — and tasted good, too.

Since the rise of craft beer in the 1980s, the American IPA has morphed into beers that are bigger in hop presence and bitterness. Brewers have experimented with process adjustments like dry hopping and wet hopping (adding hop pellets and fresh hops, respectively, after fermentation). Hop supplier Yakima Chief-Hopunion last year released a new form of hops, LupuLN2 and Debittered Leaf, separating the green leafy parts and the golden resin. As if that wasn't enough, new hop varieties are springing up nearly as quickly as craft breweries, with each hop offering different aromas, tastes and bittering potential.

The grain bill in all Chameleon variations includes English Maris Otter, domestic two-row malt, flaked oats and acidulated malt. The yeast will vary, so the grain bill may be adjusted to always achieve the target 6.8 percent alcohol. Brewing processes such as hop boil times may vary as well. But the primary difference will always be the hops. "For the most part, our hops are added late-addition, which lends itself to more flavors and aromas and not as much bitterness," Phil says, "but that can change."

The first Chameleon, packaged in green cans, uses Galaxy and Simcoe hops and is the high end of bitterness scale for an IPA. The beer is light-bodied with a bright, green flavor that highlights mango and other tropical fruit. This first Chameleon mimics a New England-style IPA: a hazy, fruity hop bomb, but with added shelf stability.

The Rays see achieving shelf stability as important to their business success.

"The more breweries that open, the longer products are going to sit," Chris says.

Similarly, Maryland's Flying Dog has been playing with a single-hop series of imperial IPAs with the same grain bill and yeast profile. Richmond's Ardent Craft Ales has numbered their IPAs and varied the hops since opening, and Castleburg Brewery recently tapped No. 7 in its Run the Gauntlet single-hop pale ale series.

Chameleon IPA will be released on March 9 in cans and on-draft everywhere Center of the Universe distributes. The ingredients for all versions of the changing IPA will be available at chameleonipa.com.