Cello, I Love You

Alisa Weilerstein brings her bow to the Virginia Arts Festival. 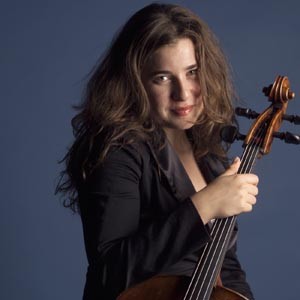 “It was not really a cello,” she recalls. “My grandmother made it for me when I was 2 1/2 years old, after I came down with chicken pox. She felt sorry for me and made me a string quartet of instruments out of cereal boxes. The cello was made out of a Rice Krispies box. That was the instrument I fell in love with and I totally shunned the other ones.”

Still, the Rochester, N.Y., native noticed that something wasn't right when she sat down to “rehearse” with her parents, who were both classical musicians. “I got to practice with them and participate with this instrument and I remember scrubbing at it and trying desperately to make it sound musical,” she says, laughing. “I got frustrated by this after awhile and I asked for a real one when I was 4.”

The rest is classical music history. Grown up, the former child prodigy who made her professional debut at age 13 has evolved into one of the world's most accomplished and admired cellists — and one of the most passionate advocates for contemporary classical music.

Weilerstein, 27, is set to appear twice during the Virginia Arts Festival; she'll lead an intimate trio recital at Williamsburg Presbyterian Church on May 27 (a concert of cello favorites spanning three centuries that will be taped for American Public Radio's “Performance Today”) and serve as guest musician with the Virginia Symphony for a May 30 Williamsburg Lodge performance of Bach's Suite No. 3 in C major for solo cello and KodA­ly's Sonata for cello, Opus 8.

Weilerstein is used to playing prestigious concerts across the globe, but a recent stopover at the White House, where she performed for the first family, several members of Congress and celebrities such as actor Edward Norton, remains a memorable experience. “It was nice to see classical music reaching the people and of course it was an unbelievable experience to meet President Obama,” she says. “He's everything you see on television times a thousand in terms of charisma. It really knocks you over.” Was she nervous? “I never really get stage fright,” she says. “I get butterflies in my stomach but it's more of an excitement thing.”

She recognizes that many people in her age group find classical music to be nothing more than easy listening music. “I hate that,” she says. “People used to say to me, ‘It's very relaxing.' No, nothing could be further from the truth. [This music] is not relaxing.” At the same time, she prides herself on being open-minded to all kinds of sounds — to relax, she listens to Bjork and even Michael Jackson along with Beethoven. “Some late Beethoven I feel is a precursor to jazz,” she says. “The Fifth Sonata for cello and piano, that last fugue is so forward-thinking that it sounds like 20th-century music. … There's jazz all over it.”