Turns out we didn't need a new stadium to bring baseball back. Who knew? 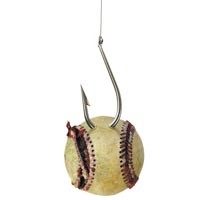 Mark the calendar. Remember the pageantry, the giant “Play Ball!” banner displayed prominently for the television cameras, the glitz and happy talk that ushered in Richmond's glorious reintroduction to minor-league baseball.Yes, the Connecticut Defenders, the AA club from Norwich, Conn., will finally move here after much speculation and an unusual quiet period in which no one seemed to care much about the future of stickball in Richmond. History tells us the threats and the boogeymen will be back. We'll need to build a new stadium when the panoply dissipates and concrete falls from the rafters, and we'll hear a familiar refrain: If you don't build it, they'll leave.

So remember the date: Sept. 23, 2009. Remember how the Eastern League, home of the Defenders, worked overtime, jetting to Richmond and back, promising that the city would get a new team even after plans for a new ballpark in Shockoe Bottom died this summer. Remember how Joe McEacharn, the Eastern League president, stood under the canopy at the 17th Street Farmers' Market in early summer and reiterated, sweat dripping from his brow, that Richmond, sans a new ballpark, was getting a team. Remember the last-minute conference call with Mayor Dwight Jones, during which Eastern League and Minor League Baseball officials swore allegiance to Richmond.

It's for good reason. Richmond is a solid baseball market with a long history of success and strong demographics (lots of middle-class families with children). During the last build-it-or-they-won't-come tour, courtesy of Highwood Properties and a group of local baseball-loving investors led by Bryan Bostic, baseball on the Boulevard was painted as a hideous failure, attendance at games falling off the map while numbers were up in most minor-league cities. If the community really wanted to keep baseball in the city, they insisted, it would need to build a grand new stadium — somewhere else.

“The Boulevard is really not adjacent to downtown, and while it has good interstate access, it really doesn't fit the model that is being successfully deployed in other cities,” Paul Kreckman, senior vice president at Highwoods, declared in February. The choice was clear, Kreckman said. After 43 years, the Richmond Braves left a year ago for Gwinnett County, Ga., because the city failed to deliver a new stadium. “They did not build it and they left,” he said. “If we are going to have [baseball] as a community, then we need to have the venue that will attract baseball back here.”

Turns out that the Defenders, an affiliate of the San Francisco Giants, wasn't the only team interested in Richmond. Four other teams jockeyed to play at the forlorn Boulevard, the Norwich Bulletin reports. Not only interested, but willing to invest their own money into fixing up The Diamond.

Long the key sticking point in the stadium debate — how many millions in tax dollars should the region, or the city, commit? — the new ownership group is dropping $1.5 million into the facility to improve seating, install new equipment and spruce up the place. In fact, the Richmond Metropolitan Authority, the regional entity that owns the stadium, is contributing less than $100,000 to the effort — $75,500 for general improvements and $18,000 to $20,000 to help fix up the scoreboard. Signing a two-year lease through 2011, with the option of three one-year extensions, the new team is expected to pay something slightly less than the $160,000 the Richmond Braves were paying. No tax dollars. Within a year the new team will begin kicking money back to the stadium authority. It pays for itself and starts making money within a year.

Kevin Reichard, editor of Ballpark Digest, says Richmond can thank Peter Kirk, a developer from Maryland who owns three baseball teams in the Atlantic League, which isn't affiliated with Minor League Baseball. Kirk submitted a proposal to Richmond in early 2008 to tear down The Diamond and build a new, 8,000-seat stadium as part of a larger athletic complex on the Boulevard.

Remember just a few short months ago when The Diamond was a dog, an unplayable ballpark that no new baseball ownership group would touch with a 10-foot pole? Bostic repeatedly swore he had a team (but didn't have enough money to buy it) and insisted that keeping baseball at the facility “wasn't an option.”

Apparently it is. Turns out Richmond didn't need to fork over millions to bring baseball back to town.

“The lesson should be,” Reichard says: “If you hold out for the best deal, you usually get it.”