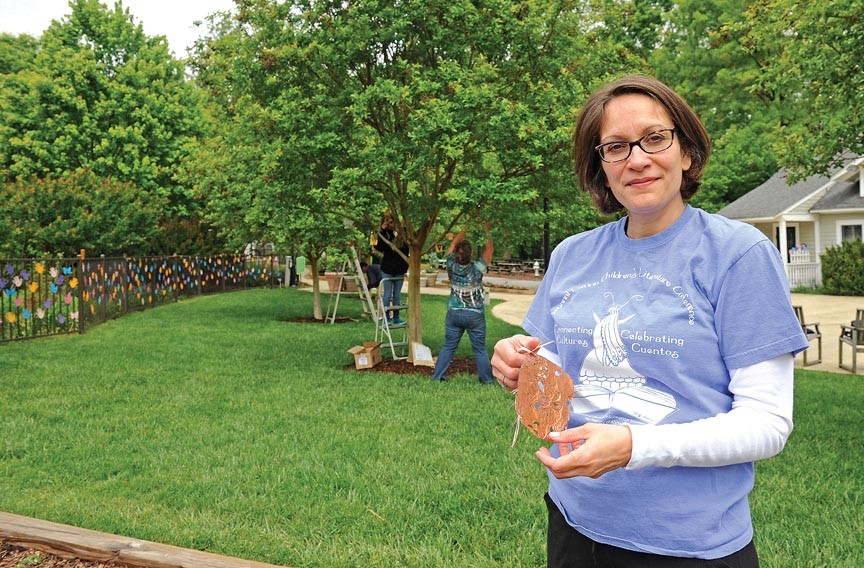 At Lewis Ginter Botanical Garden, five crape myrtle trees hang with the hopes and dreams of nearly 500 high school students. The charms flashing in the sun in the children's garden are milagros, Latin American votives typically placed on altars or fastened to church walls to express gratitude or ask for help.

For award-winning author Meg Medina, these trees are also a whole new way to launch her first young adult novel, "The Girl Who Could Silence the Wind."

It started when Medina, a Cuban-American who grew up in Queens before moving to Richmond, read an article about the difficult and lonely lives of jaiberas, the Spanish slang term for women who come from Latin America to harvest crabs in the United States.

"The only thing that survived after many attempts at writing that story was the young woman, Sonia Ocampo," the writer remembers, "and the idea of what it's like to be born into a set of circumstances where you have no control."

What eventually emerged was Medina's novel, "The Girl Who Could Silence the Wind," the story of a young woman considered a living angel by the people of her village and the wrenching events that lead her to find her true identity. The other thing to emerge was the youth program Medina calls the Hope Tree Project.

Medina, a mother of three who has been writing for more than 15 years, supplied the art teachers of seven high schools with 38-gauge art foil, copies of her book, and the challenge to make milagros that represent a hope or dream they have for themselves or their community.

"I was positive that they were going to create beautiful milagros, because they are working with art teachers," Medina says, "but what was really interesting to me was the whole process leading up to it, which was helping teenagers look at something they want for themselves."

Medina targeted schools, including Henrico, Meadowbrook and Huguenot high schools, with large populations of Latinos or students living in challenging conditions. She talked with them about the power of envisioning and defining what you want. "What's out there for them," she says, "is as malleable as the metal that they're working. That's what they need to know."

Tanya Rogish, who teaches art at Henrico High, participated in the Hope Tree Project, including having her students read "The Girl Who Could Silence the Wind."

Rogish gave her students the option of keeping their writing private so they could express themselves without fear of embarrassment. Some students wrote about personally traumatic events. "I did hear," Medina says, "from a couple teachers that the most amazing conversations started coming up because of this."

Medina's novel does not shy away from describing the desperate conditions that lead Latinos in many countries to risk their lives and migrate. "Right now, especially, if you are a Latino teen and you pick up the newspaper, the conversation around Latinos and illegal immigration is toxic," she says. "It's ugly, it inflames people. We need to have conversations. So that's what I'm hoping the novel does, that it sort of opens up dialogue, not only for Latino kids, but for kids of every stripe."

For Lewis Ginter Botanical Garden, the choice to play host to the nearly 500 milagros made by the students was an easy one. "They're powerful symbols of individual hopes and dreams," says Randee Humphrey, its director of education. "And we know that the garden is a place where people feel hopeful."

Richmond may not be the only city with a Hope Tree. After talking about the project at the National Latino Children's Literature Conference in Alabama in March, Medina was approached by librarians interested in launching the program in their communities. For Medina, it beats the typical book-signing event. "It's better than sitting with a tall stack of unsigned books and having people ask you where the bathroom is," she says. S