The final main-stage show, “Boeing-Boeing,” will run next month. 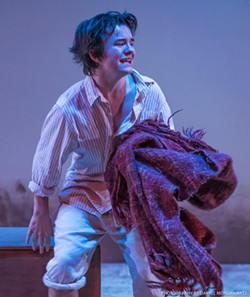 After 54 years, CAT Theatre – previously known as Chamberlayne Actors Theatre – has announced that it will close its doors as of Oct. 31. According to the theater’s website, the closure comes after it was “unable to obtain a satisfactory lease for the building.”

While financial issues played a part in the closing, immediate past president Pat Walker says it was just one contributing factor, including leasing complications with the association that owns the building.

“Both sides couldn’t come to an equitable agreement,” Walker says. “Each side wanted something the other side couldn’t give.”

“I always though of it as a gateway theater,” says Lynn Smith, a past president of its board of directors who first got involved after she was cast in a 1990 production of William Inge’s play “Bus Stop.” “It brings people back who have been away from theater for a while, it welcomes newcomers.”

Once the center of a community, attention and attendance waned as the neighborhood got older and patrons either died or moved away.

“The community changed, and the theater couldn’t or didn’t know how to keep up with the changes,” Walker says. Now it’s no longer filling a need.”

John Ambrose, who was involved with CAT for 23 years – including more than a decade as head of its board of directors – says the theater once was one of a handful of community theaters in the area.

“As time evolved, it became less of a neighborhood theater and more of a mainstay of the theater community,” Ambrose says. “I’m really taken aback and quite sad that something I worked on for 20-plus years is closing.”

Founded as a community theater, CAT went professional in 2000, becoming a non-profit and paying its actors and technicians. In its time, a number of Richmond theater mainstays either acted or directed on its stage, including Jacqueline Jones, Billy Christopher Maupin, Amy Berlin and Donna Marie Miller.

“It makes me very sad,” Smith says, choking up on the phone. “Most of the people who have walked through those doors are now friends of mine. It’s like watching a family member die.”