The expanded Virginia War Memorial is both a solemn tribute and architecturally successful. 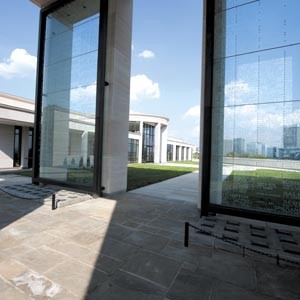 Since the earliest tribal conflicts, communities have venerated their warriors. One of Virginia's official Valhallas sits atop a prominent knob on South Belvidere Street at the northern edge of the Robert E. Lee Bridge overlooking downtown and the river. The Virginia War Memorial, dedicated in 1956, was expanded this summer with the Paul and Phyllis Galanti Education Center; it honors 11,638 Virginians who were killed in World War II, Korea, Vietnam and Desert Storm.

Although the memorial initially was built to remember World War II and Korean War dead, it has fallen to recent generations to salute veterans and dead of subsequent conflicts in their own way. It was in this spirit that earlier this month an 8,000-square-foot, $10 million combined interpretive museum, new auditorium and amphitheater were opened at the site. Placed at the northern side of the original memorial, the Galanti Center forms an L-shaped complex that's named for Richmonder Galanti, a Navy pilot who was imprisoned for six and a half years by the North Vietnamese, and his wife, who relentlessly sought the release of her husband and hundreds of other captive Americans.

Architecturally the new center, designed by Richmond-based GlavAc & Holmes Architecture, respectfully takes its cues from the stunning, classical modernity of the original memorial while animating the landmark's presence in the urban landscape.

The Virginia War Memorial is one of our city's most evocative places. For more than half a century its hilltop, open-air and stone pavilion, the Shrine of Memory, has sheltered a 22-foot-high, allegorical figure of a woman carved of Georgia marble. “Memory,” designed by Leo Friedlander, keeps a protective vigil, Madonnalike, while an eternal flame flickers at her feet. On the shrine's surrounding glass and stone walls are etched the names of the dead. Embedded under the terrace are containers holding soil and mementos from some 200 overseas battles and military operations.

Until the Galanti addition, the memorial had been a highly passive space for remembrance and contemplation. Its reverent silence was interrupted only by periodic veterans' observances and the constant din of traffic and rattling coal trains. While the shrine has not been altered, the two-story Galanti Center's exhibits and programs introduce a historical narrative with a 21st-century vibe so current that future generations might better understand the sacrifices made by their military forebears and the folks back home who supported them.

In the years immediately after World War II, it wasn't a given that the commonwealth would even build a specific war memorial. Some vocal and powerful contingents argued that veterans groups, not taxpayers, should finance such a project. Others favored a practical memorial — perhaps a sports arena or children's hospital. And when the current hilltop site on Belvidere was suggested, influential preservationist Mary Wingfield Scott railed that a memorial there would destroy one of the city's most ancient residential neighborhoods.

Meanwhile, Richmonders had wasted no time in establishing memorials elsewhere. Churches unveiled plaques honoring their losses; the American Legion built a memorial to Richmond's dead in Monroe Park designed by the esteemed local landscape architect Charles Gillette; and on the South Side, a memorial was unveiled in Maury Cemetery. Most grandly, in 1956 the Richmond Memorial Hospital was opened near Ginter Park (it recently was converted to condominiums and the memorial aspects moved to Memorial Regional Medical Center in Hanover County).

But State Sen. John J. Wicker Jr., an indomitable advocate for building a state World War II memorial on Belvidere, persevered. The winner of the architectural competition among Virginia architects was Samuel J. Collins of Staunton and his nephew, Richard E. Collins.

The Collinses created a brilliant and timeless design that embraces its dramatic site as well as any building in Richmond. Suggesting a Greek temple, the open pavilion, with highly stylized classical elements such as columns and an entablature, has a solid wall of smooth, stone block on its western side that shields traffic noise and the relentless afternoon sun. On the shrine's eastern side, each bay contains a huge sheet of glass on which are listed the dead, their names forever set against the backdrop of their capital city. Built immediately to the north of the pavilion was a small auditorium and office building that played only a supporting role architecturally.

In designing and detailing the Galanti Center, the architects pay homage to the timeless qualities of the 1956 memorial while not being obsequious. The eastward line of the auditorium has been extended with a three-part addition. The center of these blocks is an oval-shaped building that serves as the education center's reception area. The projecting, rounded bays are decorative considering the purity of the landmark they augment, but the curves are successful in announcing the entrances to the Galanti Center. Inside, the lobby is a welcoming space with clerestory windows and enlarged quotations from Virginia's military leaders. From this space visitors can enter exhibition areas and an expanded auditorium on this and an expansive lower level.

In the ell established by the convergence of the two buildings the architect set an amphitheater into the natural bowl that slopes down toward Brown's Island and the James River.

Richmond has always taken its monuments seriously. Monument Avenue is a street of world-class dimensions and power. The recent Civil Rights and Reconciliation monuments reflect a community catching up with long-overlooked aspects of its past. And with the Paul and Phyllis Galanti Education Center, Virginia's breathtakingly beautiful war memorial has been renewed. Sad, however, that it's a work in progress: The names of 100 Virginians who have lost their lives thus far in Iraq and Afghanistan await being etched in stone.