What happens to the bad children? A new event aims to celebrate the answer. 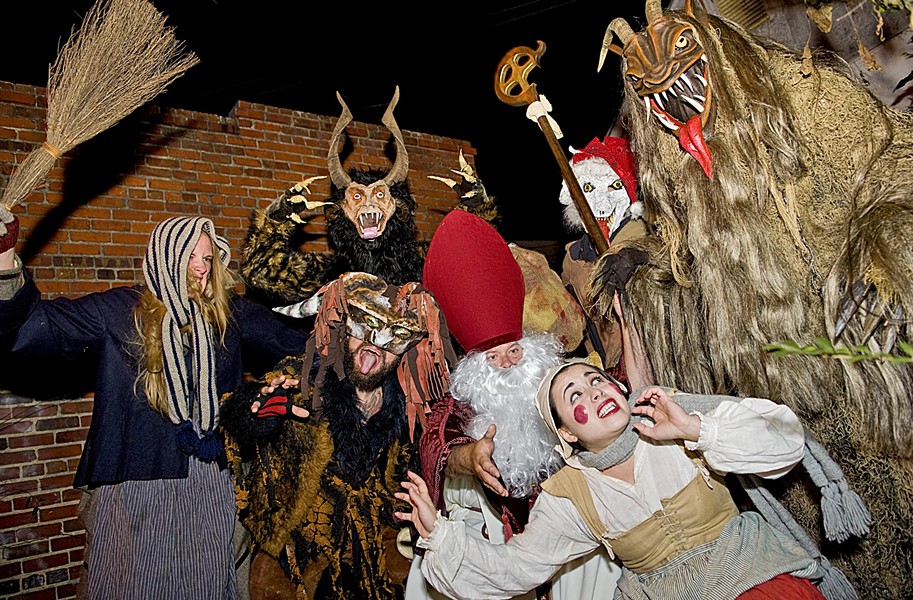 Ash Daniel Nicole Pisaniello, cowering in the lower right, is one of the co-founders of the inaugural RVA Krumpusnacht. The Krampus beasts are sent to punish bad little boys and girls.

Ever feel like Halloween is coming for all the other holidays, baring fangs?

Who's Krampus, you ask? That's St. Nicholas' evil companion, who punishes bad children — carrying the really bad ones away in sacks for God-knows-what.

The event will be similar to the popular Zombie walk, with participants in beastly homemade costumes trudging from Martin's in Carytown to just before the Boulevard, where an afterparty is planned at Portrait House with extended happy-hour drink prices for those in costume. Streets won't be blocked off for the orderly procession of child-whipping monsters.

Co-founder Nicole Pisaniello, an illustration artist who owns Deramis Creations, got the idea after seeing pictures of the event in the alpine countries of Europe, where it dates back to pagan times. "Photos were circulating of these Victorian-era Christmas cards with Krampus on them," she says, adding that the popular events have been popping up in American cities such as Los Angeles, Philadelphia, Baltimore and Washington. "We started a Facebook page [RVA Krampusnacht] to gauge interest and got a great response."

Walking alongside Krampus will be St. Nicholas, with two angels carrying baskets handing out treats. But the really creative-looking costumes are the Krampus beasts who will carry switches — though Pisaniello says no passersby or children will be harmed. Appointed victims will sign up for harassment instead, she says.

"People in Europe used to think when days got shorter, evil spirits walked the earth. So they dressed up like creatures in disguise so [the spirits] wouldn't get them," Pisaniello says. She emphasizes, "We don't want to make [our walk] specific to religion or exclude anyone."

Pisaniello is running the event with local impresario Parker Galore, and she says they hope to add a charity beneficiary and possibly an art walk next year. Galore says he got involved because the all-inclusive event will bring together a diverse group of people while shedding light on a historic figure that predates Santa.

"Krampus got cut out, used as Satan iconography," he says. "We want to rehabilitate the legend and let people know our current practices are rooted in this ancient icon. People can interpret it however they want."