Keeping up with the Elams. 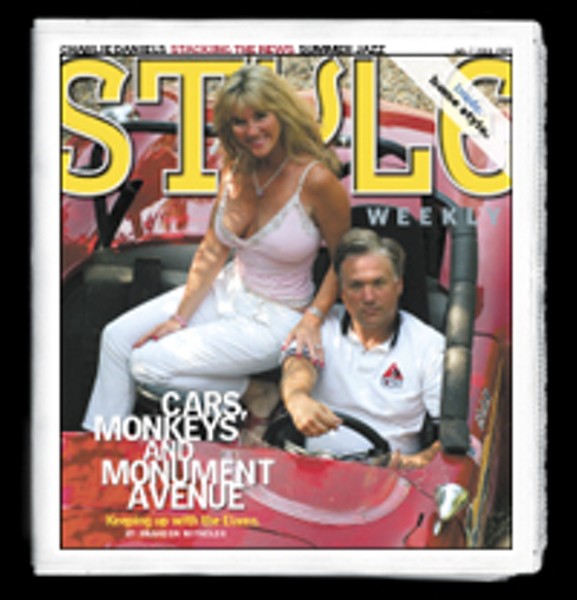 The Elams have fans — yes, fans — who rush to their computers every Monday morning to see what Dan's weekly updates will bring. There are people tuning in to Elams.org from Italy and Poland. There's a family in the United Kingdom using Elams.org as a model for their own Web site. A Czech travel magazine wanted to run some of Dan's photos of Bolivia. A group of nuns in South Africa used images in a book they were working on.

On any given day, more than 30,000 people visit Elams.org, spending an average of 12 minutes looking around, observing the lives of two people who are having a very good time, who are building communities of images and race cars and laughter and tiny diapers, who have a lot they can show the world and still have a world to themselves.

So to South African nuns and thousands of others, Richmond is the Elams.

They say a picture is worth a thousand words. And at last count, the Elams have more than 81,000 images on their Web site. But maybe there are enough words here to peek into the lives behind the thumbnail pictures, behind all the monkeys, bikinis and blown engines to figure out just who Dan and Bobbie think they are.

Haven't heard of them? Dan is, by all accounts, a computer genius. His company, eVisory, is the culmination of years of work in consulting. Its focus is helping companies save money by using scanning technology to make data transfer more efficient, and ultimately paperless. For this, he is one of the foremost experts in the field.

Doesn't ring a bell? Maybe Bobbie's more familiar. She's the financial side of eVisory, and she's involved with the Firehouse Theater and the garden club. She's also a Trophy Girl for the National Auto Sports Association.

Dan will keep a lower profile than his colorful wife. He may not seek you out, but if you engage him in conversation you'll likely be amazed by his encyclopedic knowledge, his energy, his enthusiasm, his quiet humor. Chances are he likes something you do.

But that transvestite asleep on the couch? The monkey shrieking at Sen. John McCain? And the governor in the kitchen? We'll get to them later.

The Web site is the result of a whim. When Dan left his previous job at Imerge, another consulting firm he founded, he was going to lose his only e-mail address. He didn't want to pay for AOL or get involved with the big free servers, so he decided to pay for his own domain.

Bobbie's love of animals led to Dan's grudging tolerance of them. Bobbie started volunteering with a friend at a USDA breeding facility in Richmond, working with kangaroos. A year later, Bobbie brought their first baby monkey home, which came as a surprise to Dan. They soon learned that monkeys have distinct personalities.

"They definitely know the difference between right and wrong," Bobbie says.

"Some monkeys tear up the house, some play quietly by themselves," says Dan. "You can't make generalizations about any of them." They get to know the monkeys' likes and dislikes pretty well, too.

"One monkey hated John McCain," Dan says. When the Elams and their critters would watch television, the Elams say, the monkey suddenly would get very aggressive. At first, they thought the monkey was put off by people with white hair. As it turned out, they realized it was just when the senator from Arizona appeared on the screen.

Regardless of political affiliation, the monkeys stay with the Elams as they grow. Once they get bigger and more independent, they go off to zoos and other facilities equipped to handle primates raised in the Fan. So, two dozen monkeys, a couple of white dogs and a kangaroo later, the Elams still have a functioning house, and a whole community of animals has found its way into digitized immortality on the site.

The racing comes from Dan's side of the family. It was a hobby he and his father started about five years ago, racing a Factory Five Cobra as Team Elam. Dan is a member of various race clubs, for which Bobbie is also a racer and Trophy Girl. Dan has raced all along the East Coast, as well as in California and Las Vegas.

But for the last two years, every time they hitch that trailer to their truck, the Cobra has a companion on its trip to the track: Bobbie's pink RX-7, the one with "Barbie Dreamcar" written on the side. Bobbie races in the Spec RX-7 class, the only woman there with the "Mazda men." She's one of the few women racing in any of the clubs, but she says many know her as the "track psychiatrist," for giving advice to her fellow racers, on relationships as much as racing techniques.

"I can't think of a better place to be, all that testosterone and cars," Bobbie says.

Dan cites the line that circulates around her car: "The only thing worse than driving the pink car is finishing behind it," he says, laughing.

As much as anything, Bobbie is there for the socializing. But the racing community has become important to them both. They can spend time with Dan's father, see friends from previous races. Their community grows with each race. And so does their online community, for whom they post race results, answer questions about Capuchin monkeys and discuss another hobby of theirs, Monument Avenue architecture.

It's a widening family, on- and off-line, a family that includes their friends and neighbors, people they see daily and people they know only through e-mails. Plus some monkeys.

In considering the incredible amount of information on the site, with photos ranging from an ice hotel in Sweden to a series of seagulls in flight, one might be tempted to wonder: Why? Who needs 80,000 images of themselves? Are the Elams' egos as big as their site? Do they crave the approval of the masses? Are there, in short, celebrities living on Monument Avenue?

Not likely. Bobbie's answer is simple: "I like to think of it as when we're old and can't remember anymore, we can go back to it and look at all the stuff we did." Dan's is even simpler: "In general, we're too lazy to edit what we put in. We just dump everything."

Not everyone is willing to tolerate the gaze of tens of thousands of pairs of eyes. Paige Connors, a friend whose children spend a lot of time in the Elams' monkey house, offers an opinion on the high level of interest in the site.

"People want to snoop in on somebody else's life," Connors says, adding, "I don't think I would want 35,000 people checking me out a day." She also addresses the Elams she knows in relation to how they might portray themselves online. "They're warm and down to earth—you might not get that from the Web site. But maybe they don't want people to know that."

That separation between image and realiy is what caused Ray Collins, former news anchor at WTVR-TV 6 and a friend of Dan's, who hadn't seen the site in a while, to ask: "Has it gotten racy?" The online Elams may seem eccentric, even wild, but Collins still knows the off-line Dan. "He has an ability to walk into a room and connect with people," Collins says.

Such a degree of openness invites some criticism, and some suspicion. Some neighbors have been scandalized by the site. And as with any celebrity, presenting themselves to the world through the Web site gives people a sense of ownership over them, a sense that they have the right to judge, or at least to comment, on the life that the Elams reveal.

At its mildest, it is e-mails regarding the typos visitors find. At its worst, it raises questions of security. The site does reveal a good deal of information on the Elams, but they say problems are rare. A man once became overly enamored of Bobbie and frequently called the house — that is, until Dan called the man to let him know just how much information he had retrieved on him. The man withdrew.

If the Elams' house is a monkey-filled castle, Dan would be the knight at the electric walls. And to protect the walls of the Web site, Dan can track all the visitors and derail hackers. The couple can see anyone who visits — where they go, what they're looking at, when and for how long. The window they've opened into their lives works both ways. The Elams are looking back at you. He's an expert, remember?

Yet they still let the world in unabashedly, like during the Easter parade. The diversity of their friends can be seen mingling, rich and poor, gay, straight or in-between. At one such open house, a transvestite friend who'd had one cocktail too many passed out on a couch, sprawled in what could be called a compromising position. Dan, the consummate host, thoughtfully draped a blanket over the lap of the sleeping guest.

"Well, there were children," Bobbie says, laughing. In the kitchen, Gov. Mark Warner was mingling.

At times, the Elams are amazed that they have inadvertently created these strange communities in real life and virtual reality, groups of people dedicated to whatever version of the Elams they know.

"I assure you, growing up I didn't think my life would include monkeys and transvestites," Dan says, doting over the baby monkey.

Bobbie kisses the newborn and laughs. "Well, I knew about the transvestites, but I didn't know about the monkeys."

But is too much revealed? Bobbie and Dan say no.

"I do think that people look at us and say 'That is an unusual lifestyle,'" Dan says. But neither has any regrets about the content. Their confidence that we don't see everything is a reminder that Elams.org is just one window into their lives, only a small chapter of the bigger story.

Or, as Bobbie more succinctly puts it, "It's not like we have a Web cam in our bedroom." S