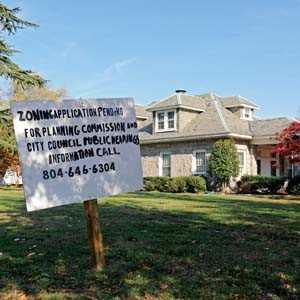 If you've already got a 7,800-square-foot mansion on Seminary Avenue, and you don't have a coach and footmen, what are you going to do with a 2,800-square-foot carriage house?

For Kevin Dodson and Rebecca Wright-Dodson, who bought both the historic granite mansion and the carriage house in 2003, the answer was simple: rent it out as four apartments. The detached carriage house, which originally housed the horses and servants of the owners of 3501 Seminary Ave., had been used by Union Presbyterian Seminary for student housing for more than 50 years.

Everything was fine, Kevin Dodson says, “until someone from the city planning commission moved across the street.”

That someone was Rodney Poole, who with his wife Laureen bought 3500 Seminary Ave., another imposing granite house. The Pooles knew the right to rent the carriage house apartments had been given up when the seminary sold the building.

“We did not want to turn our neighbors in,” Laureen Poole says. But when the Dodsons put the mansion and carriage house up for sale, Poole says she feared a developer might buy the property, sell off the carriage house and compromise the historic nature of the property. Ginter Park residents have long coexisted somewhat uneasily with the adult homes and low-rent apartments on Chamberlayne Avenue.

Citing historical precedent, the Dodsons asked the city for a special use permit that would allow them to rent the carriage house. They offered to legally combine the carriage house and mansion lots in order to discourage future owners from selling off the outbuilding.

The Ginter Park Residents Association supports the Dodsons' efforts to get their permit, President Meg Lawrence says, because dividing the property would destroy its historic integrity.

Laureen Poole says she's afraid that granting the permit will encourage owners of other carriage houses throughout the city to get one too. Plus, Poole says, allowing the Dodsons to keep renting the carriage house encourages a “scofflaw mentality.”

Laureen Poole says she's seen “some evidence of favoritism” on the part of the residents association, because Rebecca Wright-Dodson is the incoming president. The Pooles have received “vicious” phone calls accusing Rodney Poole of misusing his Planning Commission position, she says. Rodney Poole recused himself when the matter came before the commission.

On Monday night, City Council voted unanimously to approve the special use permit, allowing the Dodsons to continue renting out the carriage house.