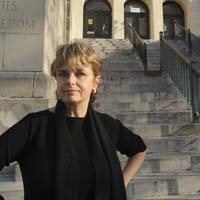 Beaten by an election law technicality, Carol A.O. Wolf will not run for re-election to the Richmond School Board.

Wolf, who has served six years on the board, often acting as an advocate for children with disabilities and as a champion for governmental accountability, failed to muster the required 125 petition signatures to have her name placed on the November ballot.
"I'm done," Wolf says, emotional after discovering Monday that 14 of her petition signers had been found not to meet the requirement of being registered voters in the 3rd District, where she serves.A,ÿ
She says she will not mount a write-in campaign to retain her seat: "It's not respectful of the system -- of the process."
"Ultimately, it's me. I talked about accountability," Wolf says, noting her 11th-hour attempt to make the election filing deadline last Tuesday after losing a petition sheet full of names. Wolf congratulated Norma H. Murdoch-Kitt, who will run unopposed for the seat.
During her three terms in office, Wolf pushed the school system to comply with the federal Americans with Disabilities Act. Late last year, she was appointed as the lone member of a School Board subcommittee charged with finding money to help the school system comply with that law and a lawsuit settlement.
Most recently, Wolf lobbied City Council and Mayor L. Douglas Wilder for additional money to pay for improvements to bring the school system into ADA compliance.
ÿ
Both versions of the budget (Wilder and council are at odds over whose budget is legal) include $5 million earmarked exclusively for ADA improvements. That money is in addition to approximately $2 million Wolf's subcommittee helped secure from other sources.
"I was a voice for responsibility and reform, and I shall continue to be," says Wolf. -- Chris Dovi