Byrd Park is fine, they say, just not near World War I memorial. 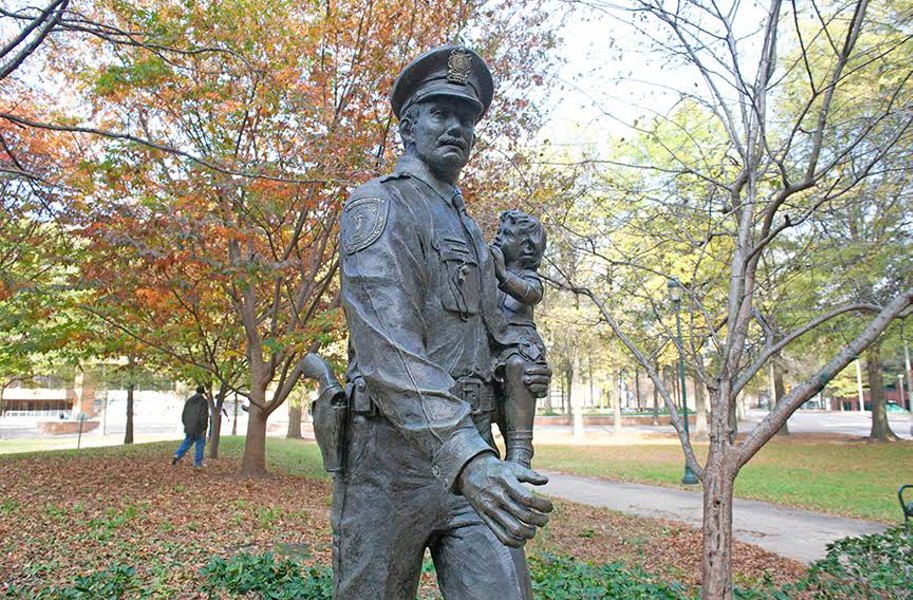 Fallen Richmond police officers, you aren't wanted by World War I doughboys -- at least not so close by.

That seems to be the message as plans move forward to relocate a statue commemorating 28 Richmond police officers who died in the line of duty from 1869 to 2003.

For years, the statue has languished in the Nina F. Abady Park at 412 N. Seventh St. downtown. The once-popular area has seen the public move to other local venues, such as Brown’s Island, and has fallen into neglect.

Last summer, plans seemed to be coming together to move the police memorial to the Carillon area of William Byrd Park.

“It turns out, the Carillon Civic Association doesn’t want it. Can you believe that?” says Glenwood W. Burley, a retired police officer who is leading the effort to spiff up and move the statue.

“There’s a lot of opposition to it where they wanted it to go,” says Sharon Hill, a vice president of the Friends of William Byrd Park. She says that it would have been placed in a setup of memorials and landscaping drawing one’s eyes to the Carillon, which was built to commemorate those who died in World War I. The Carillon was built with money from England, she adds.

Hill says she has nothing against the police memorial, just not in the place suggested for it. “It has nothing to do with World War I.”

Jack Frye, a board member of the Carillon Civic Association, agrees that the police memorial is a bad fit and that there are other places in Byrd Park where it might go. “There’s a little triangle on Blanton Avenue at the southwestern corner of the reservoir,” he says. “It has lots of foot traffic.”

He wasn’t sure who might make the final decision of where the police memorial might go, but says the city likely will be involved with its historic commission.

Back at Abady Park downtown, Maria J. Kirby-Smith and Lynda Solensky are busy cleaning up the statue of a police officer holding a child. Kirby-Smith, who lives in South Carolina, drove up with Solensky, who lives near Austin, Texas, to do the clean up with wax and water. “Chlorine is the kiss of death for bronze,” Kirby-Smith says.

She designed and built the memorial in 1986 and 1987 and drives to come up every now and then to keep it clean. That's been a problem, she says, because of bird droppings and that homeless people have sheltered outside nearby and have used it as a bathroom.

Burley watches while he mutters about the Carillon situation.