How the pandemic is changing job futures for people with disabilities. 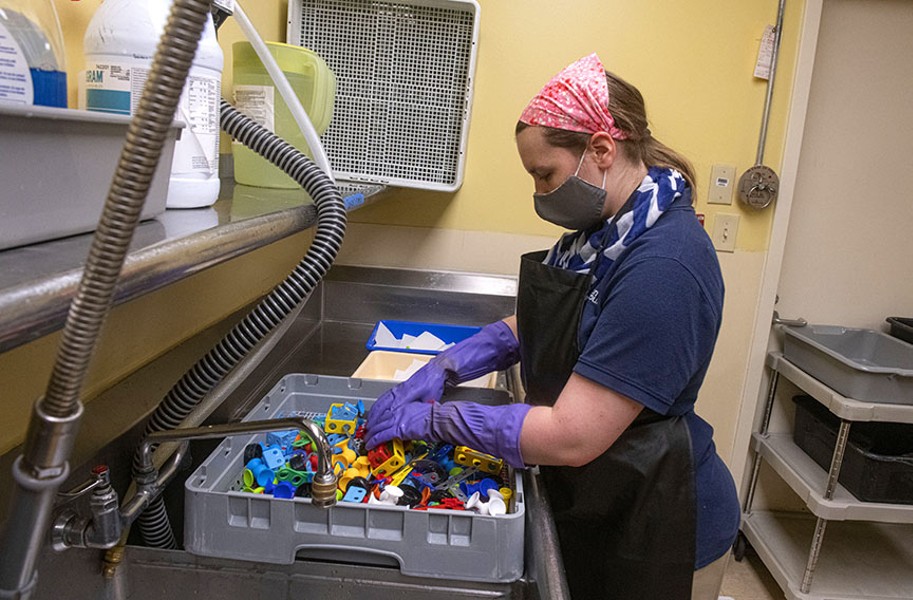 Ann Marie Chevalier, a teacher’s aide in the day care at Bon Secours St. Mary’s Hospital, returned to her position in November after a furlough and temporarily supporting the hospital’s coronavirus cleaning efforts.

Chevalier is a client of Virginia Commonwealth University’s Rehabilitation Research and Training Center, which provides employment resources for people with developmental disabilities. She has worked with a job coach from the center at the hospital for nearly 10 years. “I love seeing the kids and making a difference in their lives, the small impacts and even the bigger impacts,” she says of her work on pandemic safety precautions. “I love being able to help wherever I can help.”

Chevalier, who has autism, previously participated in a center internship program that helped refine her time management and communications skills.

“It’s just very important to keep things clean and a routine,” Chevalier says. “You don’t know when this virus is going to hit. So I was cleaning tables, doorknobs, phones, different areas in the hospital. ... the most critical areas.”

Chevalier’s strength is her enthusiasm and dedication to her work, says Bethany Moog-Ayers, one of two job coaches for more than 20 center clients at St. Mary’s.

“The people I work with are very prompt, very committed to their jobs and do not take their work for granted,” Moog-Ayers says. “[Chevalier] doesn’t minimize her work. And it’s so important, the work that she’s doing.” 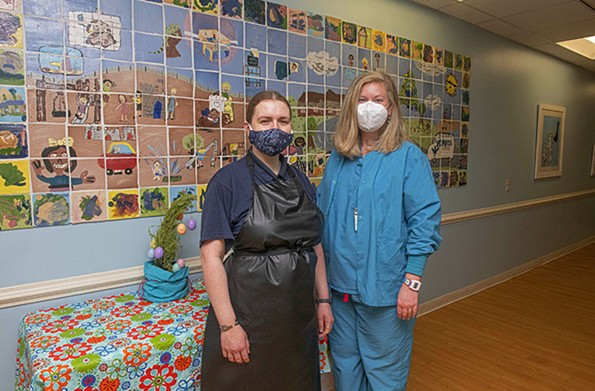 Workers with disabilities represent only 3% of the U.S. labor force. But in the initial, early spring months of the pandemic, over 1 million U.S. workers with disabilities, or one in five, lost their jobs compared with one in seven workers in the general population. These numbers overshadow decades of improvement since the passage of the ADA in 1990.

And there’s another problem: Wage inequities perpetuated by a federal loophole that allows employers to pay people with disabilities arbitrarily, based on perceived productivity, has led to many workers being paid less than the minimum wage.

Employers also often hesitate to hire people with disabilities because they believe accommodations will be costly or time consuming, particularly while resources are strained during a pandemic. But that’s a misconception, Moog-Ayers says. For Chevalier, simply using a timer tends to help with focus.

“There are reasonable accommodations, I would say some of them are related to giving someone a different space to work with, if someone needs a little bit more privacy and less stimulation,” Moog-Ayers says. “And having a job coach is no cost to the employer.”

For 40 years, VCU RRTC has studied national employment practices for the disabled and connected area employers with workers who have disabilities. The team provides onsite job training, assists in creating positions that meet both employer and client needs and helps employers provide work accommodations.

Many businesses that employ people with disabilities, such as restaurants, are shuttered during the pandemic. Organizations focused on job security for the disabled are refining work skills training and furthering efforts to assist in employment searches, explains Valerie Brooke, who leads education efforts for clients with autism at the center. Though progress under the disabilities act has stalled, the momentum behind improving options for the disabled should continue after the pandemic, Brooke says.

Brooke says that despite the economic downturn, she remains positive.

“Unlike the past when we were knocking on doors, community leaders are now coming to us asking how to improve their inclusion practices,” she notes. “Is there work to be done? Sure, but we all seem to be rowing in the same direction.”

Too often, employers are inclined to focus on the potential weaknesses and not the strengths of an applicant with a disability, Brooke says. “So, it’s really helping to kind of turn that mindset to focus on their abilities.” 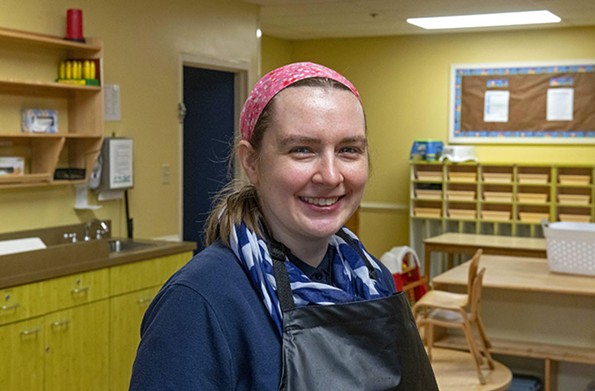 Partially due to this bias, young adults with autism are less likely to be employed than peers with other disabilities, Brooke says, with 58% of those in their 20s unemployed, according to a study by the A.J. Drexel Autism Institute. Often the unfamiliarity of employers with the social behaviors of people with autism impacts employment, she adds.

But many traits that have been associated with autism may be advantageous at work, Brooke adds. Though their personalities and strengths vary widely, many workers with autism possess a high degree of attention to detail, focus and pattern recognition.

“We can market someone with autism who can just laser in and focus on, for example, pulling prescription drugs – they can do that all day and have a high productivity rate and high accuracy,” Brooke says. “If you hired you or me to do that, we might get bored and our accuracy would drop off.”

Chevalier’s experiences with furlough and job change, typical of many Richmond area workers during the pandemic, are faced more frequently by those with disabilities, according a study from the VCU center published in the Journal of Vocational Rehabilitation in January. The study showed that hours worked by 156 center clients with intellectual and developmental disabilities decreased across industries sidelined by the pandemic, but wages remained the same, as shown by comparison to a group working over the same period in 2019, with 133 employees in common with the 2020 cohort. Additionally, the clients were furloughed and laid off more than workers in the general population because all had jobs that did not enable them to work at home, researchers wrote. During April 2020, the month when wages were most curtailed, only 41.6% worked on-site in essential jobs, compared to nearly 95% employed in April 2019. But by June, more than half were working on-site again, which shows workers with disabilities play an important and possibly unexpected role in essential industries, Brooke says.

“It was amazing the number of jobs that were sort of insulated from COVID, like the hospital jobs and supermarket jobs,” she says. “They are not these fragile people with disabilities, they were essential workers providing the community with a service.”

The pandemic could also be a chance for employees with disabilities facing job changes to explore new careers, an opportunity thought to be largely unavailable to them, Brooke adds.

“They can ask if that is a field that they want to go back into or is there something new you want to do,” she says. “That’s the other really weird thing about employment and disabilities. It’s like, ‘Well you got your job, you have to stay in it.’ But how many jobs have [typical workers] been in and out of?”

Exploring new career choices amid the shutdown is a new focus at Max’s Positive Vibe Café, a full-service restaurant that has provided job training and employment for people with disabilities in Richmond.

Restaurateur Garth Larcen opened the South Side eatery in 2005 to provide his son, Max, who has progressive muscular dystrophy, with a job after he had a hard time finding employment after high school.

“I told him, you’re not getting off that easy, we’re going to make a job for you,” Larcen says jokingly.

He also aimed to teach a few hundred other workers with developmental and physical disabilities the ins and outs of working in restaurants. Since then, Positive Vibe’s training program has graduated more than 1,500 students, many of whom are working locally in food service and at the restaurant.

The restaurant has been temporarily closed to diners due to the pandemic, but Larcen has used the down time to revamp Positive Vibe’s youth-focused training program, which mostly serves students in Chesterfield and Henrico public schools. Instead of solely learning restaurant work, trainers now impart skills that can be used in a variety of workplaces, many being essential businesses. Positive Vibe has worked with area businesses, such as Publix Super Markets and the Clothes Rack, to train young adults in other customer-service areas. The pivot comes as workers across the globe aim to shift to industries that are more recession-proof amid the pandemic. 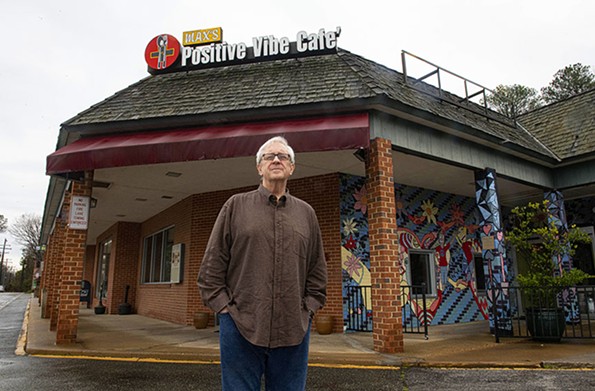 “That’s when we decided the real future for people with disabilities isn’t going to be in restaurants for a while,” Larcen says. “We know that the odds are against our graduates finding restaurant jobs, so we are trying to prepare them for other types of occupations.”

The donations and grants the restaurant relies on have largely remained level, but with a closed dining room, “if it doesn’t get better by summer, I don’t know what our future is,” Larcen says.

Positive Vibe Café won’t open again until its staff is vaccinated against COVID-19, he adds. Virginia’s initially slow vaccine roll-out compared to other states is of particular concern for many people with intellectual and developmental disabilities, who are two to three times more likely to die of the virus, according to a Syracuse University study. People with conditions such as Down syndrome were included in the study. People with autism were not included.

But as the pandemic continues to hamper the economy and poses a workplace health threat, getting back to work is more than a paycheck to people with disabilities, Larcen says. It could mean restoring one’s sense of dignity and purpose.

“People with disabilities, for the most part, look at employment as an award, something they want to do, not an obligation” Larcen says. “They look at it as a privilege. They want to work.”