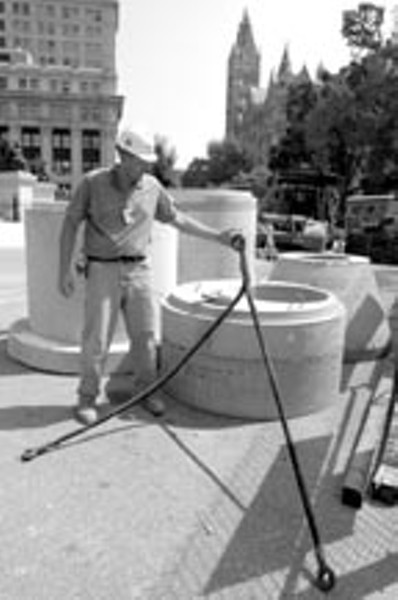 A worker gestures to Woodbury — there's the dratted thing, leaning against a concrete block. It's big and rusty. And it looks exactly like an iron wishbone, with one straight arm and one curved.

Archaeologists and historians were consulted when the wishbones were first discovered. "We talked to I don't know how many people," Woodbury says. No one could offer more than a guess as to what they were — sign brackets? Part of a horse-drawn carriage? The prevailing theory is that they were anchors for an old scaffolding system or a hoist mechanism.

"No one knows what it is," Woodbury says of the surviving wishbone. "And no one wanted the thing."

The construction crew at the Capitol has been taught to be on the alert for artifacts as they excavate and renovate the 217-year-old building. Posters remind workers, "Don't pocket the past," and those who bring in artifacts they find are rewarded with a certificate.

They have yet to discover anything as dramatic as, say, one of Thomas Jefferson's waistcoat buttons. Thus far, workers have found the end of a ramrod for a muzzleloader and several pieces of broken china. Inside the Capitol, they've come across only a few 30- and 40-year-old magazines left during previous renovations, but other things may turn up as crews demolish some interior walls.

The renovation of the Capitol and addition of an underground extension for the entrance is part of a four-year, four-building overhaul of Capitol Square. The entire project is expected to be completed by the end of 2006, in time for the Jamestown quadricentennial.

He decided Friday it would be best to put it in the Capitol Square trailer that serves as a temporary visitors' center. Woodbury hoisted the 50-pound wishbone and trudged through the summer heat to the trailer. Tour guide Carolyn Whelan, the only person inside, watched with interest.

"This looks like a big wishbone!" she exclaimed. "What is it?" — Melissa Scott Sinclair