She may not have a driver's license, but Kirstin Tanner soundly covers the Richmond scene. 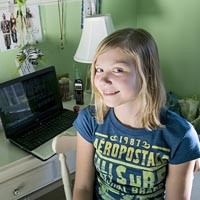 One of the hardest-working people in the local music scene can't even get into most shows.

Meet Kirstin Tanner, the 13-year-old founder of Richmond Music Forum. Born out of a deep love of music and a desire to share local band information with teenagers and adults alike, Kirstin started a nonprofit Web site, richmondmusicforum.com, with features including a concert calendar, interviews and live performances by bands such as Carbon Leaf and Gwar.

“My dad's in a band and I really wanted to be in a band too, but I don't play any instruments well,” Tanner says, laughing. “So, I figured interviewing bands would be even better.”

With the help of her good friend Emily Turner, the middle-schooler hits the streets to interview bands that have submitted a request on the forum's Web site as well as those scouted while surfing social networking sites such as Myspace. “It's hard to balance it all,” Tanner says, “but I try to take some time each day after my homework to go online and listen to new bands and then send them a request on MySpace and then from there set up interviews. It's actually all very organized.”

Her dad, Brian Tanner, bassist for 59H20, helps her upload the finished product to her site and couldn't be prouder of his pint-sized promoter. “She excels at anything she does,” Tanner says. “She took on this project that was totally her idea and ran with it.”

It started innocently enough. “She wanted passes to a concert and they were something like $1,000, so she started exploring other options online for ways that she could meet people that she respected. She discovered the blogging idea and created a forum where she could interview local artists. Then, it went regional and then national.  She's progressed quite a bit.”

While professional and well versed in music-management lingo, Kirstin Tanner still is every bit a seventh-grader in the best of ways. “Music is a really big part of my life, but I'm also totally into my studies. I really like science and math,” she says. “Oh, and I have a black belt and I love soccer.”

When the conversation turns back to music, Tanner says that her dream interview would be the Jonas Brothers, but mostly listens to a lot of new rock, hip-hop and classic rock such as Led Zeppelin and Styx.

With no formal training, Tanner seems to handle interviews with guys like Bruce Hornsby and Elliott Yamin with real finesse. She acknowledges that the first interviews gave her the jitters. “I was kinda freaking out,” she says. “I kept practicing on my dad to make sure I had everything right. Same thing happened when I found out I was going to meet Bruce Hornsby. I had to figure out exactly what to say and make sure I didn't mess up.”

Tanner says her efforts are also worth it to support Richmond music. “These are people I'm around every day and I like their music,” she says, “so I want to help them out. They're my friends and family.”