A Secret Forest has a growing following for its blends of fantasy and confection. 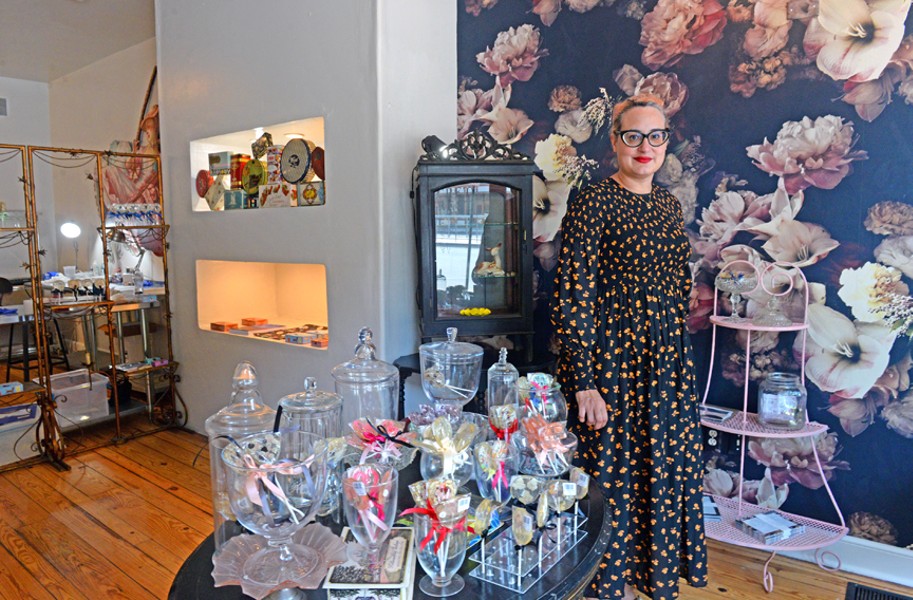 What do edible glitter, rosé, and vegans have in common? Tipsy gummy bears, that's what.

Vanessa Beller specializes in creating this blended brand of fantasy and confection. Her new storefront, a Secret Forest, on Broad Street is the latest home to her edible art, which has an international following.

Houston resident Aime Free discovered the business after learning of David Bowie's death. She headed to Etsy to purchase a T-shirt or other memorabilia and instead stumbled on Beller's David Bowie lollipops.

"I had never seen anything like it," she says. "They were so intricate and detailed."

Ever since, Free has been hooked, she says. She keeps a close eye on a Secret Forest's Instagram account for new products and design ideas. Every gift she wraps has a lollipop tied to the front.

Beller creates her confections as a one-woman-show. She builds each of the items for her online Etsy store and brick-and-mortar shop by hand. Edible wafer paper fondant, and marzipan are the foundation for designs like metallic blush swans, burlesque dancers and circus elephants. Some of her creations have real gold flakes and edible flowers like cherry blossoms. A shelf in her workshop is lined with rows and rows of exotic and natural flavor extracts including elder flower, jasmine, litchi and French violet.

For the past five years, she had been growing her business online from Los Angeles. But she never had the option to rent her own space in LA with prices and strict food-preparation rules. Beller and her husband had plans to move to Charlottesville earlier this year, but a day trip to Richmond had them both changing course. Beller discovered the space and thought it may be the right time to launch a storefront.

"Originally, I was just looking for a work space," she says.

"There is an encyclopedia of things that inspire me," Beller says.

One of her loyal customers in London, Siân Parry-Lewis, loves her ballerina decorated lollipops inspired by the 1940s film "The Red Shoe." Candies with mermaids, paper moons and edible flower-filled lollipops have been featured in "Faerie Magazine." A Secret Forest's presence is growing on the East Coast: Charlottesville store Roxie Daisy and Williamsburg shop Everything Vintage Co. both carry her edible art.

Beller's latest creation, vegan rosé gummy bears, have just hit her site and the shop in Richmond. Customers were waiting patiently online for their release, she says.

"You can't find these anywhere," she says. "That's the kind of thing I like to challenge myself to create."

You can visit a Secret Forest at 102 W. Broad St. and online at asecretforest.etsy.com.