Candles in the Cold

With three homicides this month in Hillside Court — a city housing project just off Commerce Road — the anger is boiling over. 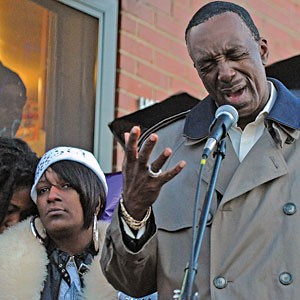 Pushing a stroller through the intersection of Ladies Mile Road and Delmont Street more than 10 years ago, Regina Doctor caught his eye. Sherman remembers cruising in his red Toyota Corolla, smitten, working his angle. “I was hitting on her,” he says. “I don't remember where I was going.”

They dated for a couple of months in high school, and then didn't see each other for the next 10 years. At a club on Jefferson Davis Highway one night, Sherman ran into her and found himself smitten again. They dated for about five years and recently started planning for the future. Regina, 29, was heading back to school to pursue a law degree; Sherman sought a degree in computer programming and business.

“We had been talking about stuff,” Sherman says, standing in Doctor's concrete bunker of an apartment at Hillside Court on a bone-cold Saturday afternoon. A collection of stuffed animals and teddy bears sit in a living room chair, covered in plastic. A small oven is open in the kitchen for heat while relatives and neighbors filter in and out of the back door, where Regina's body was found Jan. 18. She was taking out the trash, friends and family members say. Her 13-year-old son, Ru'Quan, was playing video games up the street, says Alicia Rasin of Citizens Against Crime, when he heard gunshots. He ran home, she says, and held his mother until police and ambulances arrived.

Rasin led a vigil, a memorial for Doctor at dusk on Saturday, with the temperatures dropping into the low 20s, exposing still-raw emotions. Standing on the patch of ground where her sister lay dead just days before, Evelyn Doctor wasn't ready for the praying and healing — not yet.

“I'm not built for this shit,” she says. “I look every day in the mirror and see my sister, man.” She slips in and out of grief and anger. One minute she cries, and the next she vows vengeance on her sister's killers.

“She is going to be a gone memory next month,” Evelyn says. “Ya'll know Gina, man. That's all she was doing was dumping her fucking trash.”

With three homicides in just this month in Hillside Court — a city housing project dropped in the middle of an industrial district just off Commerce Road — the anger is boiling over. The president visited Tuscon, Ariz., says Ameen Dawan, but Mayor Dwight Jones can't attend a vigil in his own city?

“Where's our officials at?” he asks. “Where are our mayors at?”

Still, none of it will bring Regina back. This reality has yet to set in on Sherman, her boyfriend, who hasn't had time to comprehend his loss. It'll probably come after the vigils, the funeral, after the police officers dissipate and the TV cameras disappear. “I can't break down and cry,” he says. “I've got to hold up.”