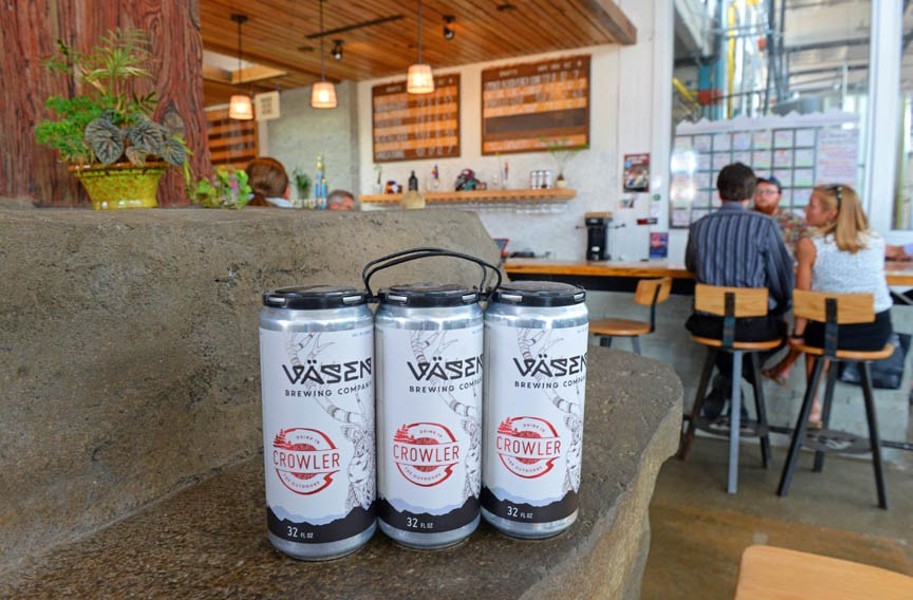 Scott Elmquist/File Väsen Brewing Co. has it made it easy to order canned beer to go.

But during the pandemic, breweries, like all other nonessential businesses, have been forced to close their doors. The revenue-generating taproom model has been fractured and reshaped – breweries are canning product as fast as they can, driving and mailing six-packs to beer lovers in need.

“While we pride ourselves on the great atmosphere our taproom provides for enjoying a beer straight from the tap, we’ve done what we can to provide a great pickup experience as well,” Vasen’s Joey Darragh says. “Since day one, we’ve encouraged our customers to ‘Drink in the Outdoors.’”

As he points out, “the great thing about beer is that it can be enjoyed anywhere.”

The Vasen Instagram feed features muddy golden retrievers posed atop mountain rocks next to a can of the “best damn Mexican lager this side of the Rio Grande.” Cans of Velvet Walrus sit nestled in brush with a cyclist fading into the background. The message is simple: You may have to stay home, but you don’t have to stay inside.

From can labels to commissioned murals, the craft brewery aesthetic has become its very own pulsating, compelling entity over the past decade. It’s a huge industry – according to the Brewers Association chief economist Bart Watson, American breweries saw upwards of 70 million visitors in 2019. That’s up from 15 million visitors in 2015.

And while yes, beer can be enjoyed anywhere, it is far more enjoyable for breweries when the beer is sipped on-site: You can’t really argue with an $8 draft pint and a $10 canned six-pack. Even nonbeer drinkers flock to festive taprooms, which often play host to food trucks and game nights and have a variety of hard seltzer or nonalcoholic options on tap. The only people ordering curbside cans are the ones who will go out of their way to drink that one-off seasonal double India pale ale.

“Every time you see a can that’s a dollar in costs,” says Iron Heart Canning operations manager Randy Edwards. “Every time you buy a six pack. … The brewery is not seeing that: They’re just paying for the packaging.”

Crowlers are back-ordered around the country, and there are no restaurants ordering kegs. Canning is the only option to get the product out.

And even then, it’s less than ideal.

“The month of May is typically our ‘saison month’ where we release three or four varieties of saisons to celebrate the style,” Darragh says. “Unfortunately, we had to cancel these brews in favor of styles that lend themselves better to the can format.”

In a state of the industry presentation, Watson says that even with the increased number of visitors to breweries, there are warning signs that the breweries themselves are not seeing an increase in sales. As of March 31, Watson notes that there were “thousands of breweries” in planning. That’s a hell of a lot of competition in good times, let alone during a worldwide pandemic.

Gov. Ralph Northam has extended Executive Order 53 until May 14, when the state will be able to enter the first phase of reopening. The first of three steps, the reopening will include adherence to physical distancing and enhanced cleaning. Breweries and the rest of the hospitality industry will be able to reopen under certain guidelines, but it remains to be seen what will happen when the orders are lifted. Will all the cabin-fever-crazed people rush out to frequent their favorite small businesses? Will there be room for them there?

The immediate fate of independent bars, restaurants and breweries is hardly glowing. A recent Forbes article delineates four reasons why reopening too soon would “crush the restaurant industry.”

Simply put, after weeks of revenue loss, the cost of constructing a full menu and rehiring a full staff while only serving a fraction of the usual customers means even more financial bleeding out. And the what ifs are death knells – one person getting the virus after a restaurant visit means no second chances.

It’s not all doom and gloom, though. Watson points out that while the pandemic is certainly not helping the brewing industry in 2020, the cracks were already there. “This will help build in more resilient business models not just focusing on the taproom,” he says.

Darragh concurs. “The pandemic has certainly opened our eyes to alternatives that we probably would not have considered before. The delivery system has worked out really well and our customers have had a great response to it.”

So as we ride out the rest of this unprecedented mayhem, take a moment to order your favorite springtime ale from one of Richmond’s own. Then raise a glass, or a can or coffee mug, to thoughtful reopenings, continued ingenuity and a cold one enjoyed straight from the tap.