Stone Brewing Co. is coming to town. So what can you expect when its new home near the James River opens its doors? 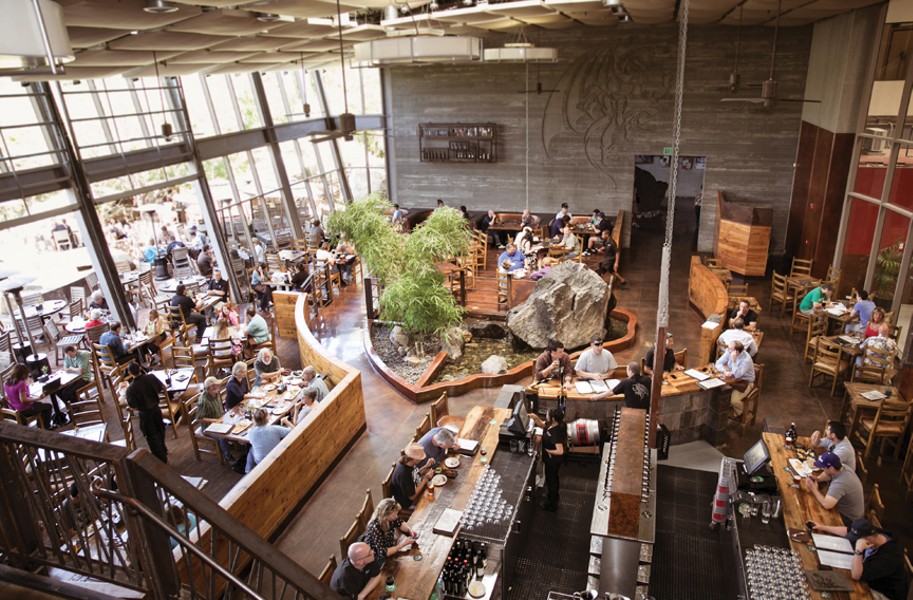 Stone Brewing Co. earned plenty of applause from residents thrilled to learn that the country’s 10th largest craft brewery had picked Richmond for its East Coast expansion. But the deal isn’t without controversy. Some prominent local restaurant owners recently questioned an additional $8 million loan offered by the city for Stone to build a restaurant in the old Terminal Building overlooking the James River.

Nevertheless, the brewery’s restaurant will get built one way or another. What can Richmond expect once both brewery and restaurant are finished? I searched for clues during a visit to Stone’s headquarters in Escondido, California.

Stone’s craft brewing operation is home to two 120-barrel brew-house systems. By the end of the year, the brewery will house 68 400-barrel fermenter tanks and six 150-barrel fermenter tanks. Stone brewed 213,277 barrels of beer in 2013. For perspective, Hardywood Park Craft Brewery is on track to brew about 8,000 barrels this year.

While the California brewery is quiet the Friday after Thanksgiving, its restaurant and tasting room are quite the opposite. Both open at 11 a.m. daily, and by 10:45 a.m., the tasting room — which doubles as a gift shop — is full of turkey-stuffed patrons waiting for the 11 o’clock tour or a seat in the restaurant. By noon, the complex is packed with customers.

Tours run every hour and last about 30 minutes. While not particularly educational, they provide insight into Stone Brewing’s impressive operation and diverse beer list. On a busy day, visitors are better off skipping the crowded tasting room and ordering beer from the bar to drink while wandering through the adjacent garden.

The restaurant, called Stone Brewing World Bistro & Gardens, revels in the same success as its brewing operation. The vibe is laid back, California cool with huge glass windows that mostly remain open to a large patio full of wooden tables and chairs, as well enormous stone slab tables for groups. All told, the restaurant can seat 425 people. Chief Executive Greg Koch refers to the feel of Stone Brewing as “industrial-becoming-organic.”

Children watch koi ponds during meals, and you’re reminded that you aren’t too far from San Diego beaches. The garden on this particular Friday is sprinkled with adults enjoying pints of beer in Adirondack chairs, and children are climbing on the rocks and running throughout. While unlit on this unseasonably but not unusually warm November afternoon in Southern California, fire pits on the property — some in the middle of tables and others in the garden — encourage hanging out even when the weather turns chilly. Stone’s second restaurant, in San Diego’s Liberty Station, also features a popular bocce ball court.

The menu at Stone’s restaurant is expansive and expensive ($30 for a pork chop at lunch). It boasts local produce, including fruits and vegetables from Stone’s 19-acre farm about nine miles from the brewery. The food is decent, the portions large. But when Stone sets up shop in Virginia, it definitely will need to step up its brisket.

In Fulton, according to Koch, visitors should expect something very similar. Stone’s Richmond site will be home to a production brewery, packaging hall, restaurant, store and administration offices.

The company plans to start its East Coast production with a 250-barrel brewing system, turning out year-round and special-release beers.

Similar to Stone’s Escondido and Liberty Station restaurants, Richmond’s menu will highlight locally grown organic food as much as possible and feature an extensive list of craft beers and wines from other breweries and winemakers in addition to Stone’s products.

“We’ll meld features of reclaimed wood, stone, plant life, water and fresh air with industrial elements of metal, concrete and glass,” Koch says. Although design plans are still very much in the works, “Richmond will definitely have its own unique Stone-like feel and ambiance,” he says. “The fact that the Terminal Building overlooks the James River is something that we’re really excited about.”

In California, Stone Brewing found a niche that it hopes to reproduce here — short and cheap tours, a full, locally grown menu in a lively open-air restaurant, and an environment that appeals to customers of all ages. S