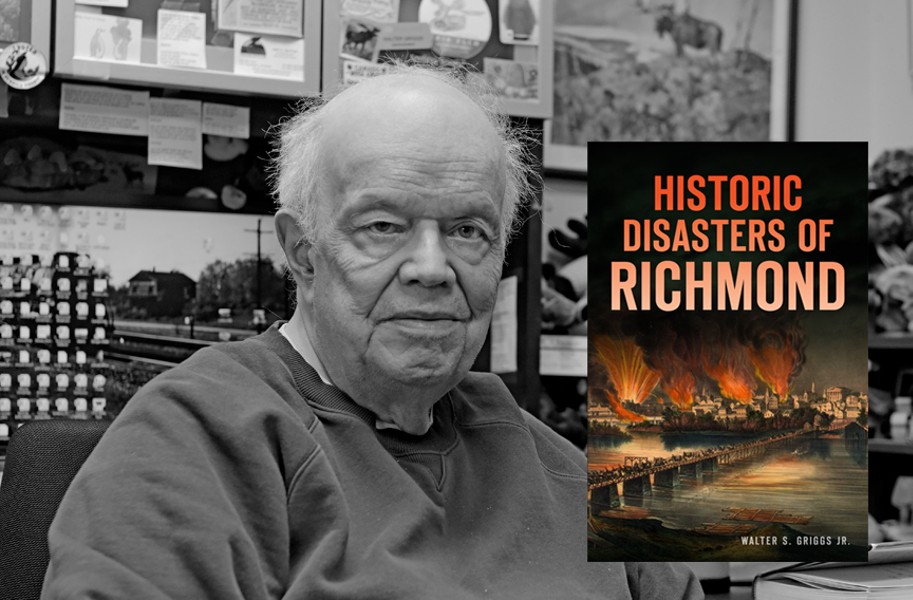 An 18-year-old named Mary Ryan went to work at a munitions factory on Brown’s Island in 1863 and accidentally killed herself and 45 others while trying to dislodge a cannon primer from a rack.

A stagehand at the Richmond Theater sloppily raised a candle chandelier in 1811, and 72 people died in the ensuing fire.

Engineer Tom Mason drove the last train underneath Church Hill before the tunnel he and his crew were repairing collapsed in 1925.

Most Richmonders have heard about or seen passing reference to the city’s most dramatic, traumatic events. Now, finally, we have the most famous Richmond disaster stories in one macabre book: Walter S. Griggs Jr.’s “Historic Disasters of Richmond.”

“I hadn’t planned on writing a book on disasters,” Griggs says from his Virginia Commonwealth University office. “But I think there’s an interest in when things go wrong. Not many people are interested when things go right.”

A lifelong Richmonder, Griggs grew up hearing about local disasters and set out to write full accounts of them. “I had a vague knowledge of most of them, like the Jefferson Hotel fires, the big floods,” he says. “It was a lot of fun trying to find out what had happened.”

Griggs also writes about a global epidemic’s impact on Richmond. “The Spanish flu epidemic was intriguing to me because my grandfather had it, and the rest of his life he spoke in terms of, ‘I got over the flu,’ as if that was some miraculous thing,” he says. “I guess it was.”

Almost 21,000 people contracted it in Richmond and nearly a thousand died. “They were using buildings like the John Marshall as a hospital,” Griggs says.

Several tragedies feature victims buried where they died: in Chesterfield coal mines, under Church Hill, beneath Monumental Church where the Richmond Theater once stood.

“It was an emotional feeling,” he says of seeing it. “These young women had been buried for over a hundred years, no marker, no nothing. Just a plot of ground.”

There are also disasters readers might not know about, such as the 1870 floor collapse at the Capitol, which killed 62 spectators at a Reconstruction-era court case. And a plane carrying 79 people from Baltimore to South Carolina in 1961 crash-landed near Byrd Airport and killed all but two crew members.

There’s a lighthearted chapter about runaway train cars that derailed from the raised tracks of Richmond’s triple crossing, crashing into buildings below but injuring no one.

Griggs has experienced much of Richmond history himself. He grew up in Ginter Park near Union Seminary in a house that he suspects harbors his grandfather’s used cigars on the basement’s heating pipe. (“He was very frugal.”)

Griggs graduated from Thomas Jefferson High School in 1959 and earned a law degree, a master’s in history and a doctorate in academic administration. He’s taught history courses such as Death and Dying in his 45 years at the university. Now he teaches law at its business school.

Griggs has written 10 books, including three about moose. (His office is home to about 40 moose figurines and stuffed animals. “I identify with them, they’re slow-moving,” he says.)

But his most recent books are about Richmond history — an effort to preserve it for future generations.

“I think growing up in Richmond and seeing the evolution has really influenced me,” he says. “I can look out that window and Benedict Arnold’s men ran right down Main Street there. I can look toward Central National Bank building and know that during World War II, the mayor would stand on top to check to see if the people had turned their lights out.

“I’ve gotten to the point now where I drive down the street and I seem to know something about every building. They take on a new life for me.”

His next book will be about historic Richmond churches — a tome he hopes will be less depressing.

“But you learn from disasters,” he says. “Don’t go smoking in a hotel, and things of that nature.” S

Walter Griggs reads from and signs copies of “Historic Disasters of Richmond” on April 24, from 2-4 p.m. at Book People on Granite Avenue.