A new meta-Nic Cage movie traffics in irony and ultimately holds the explosive actor back. 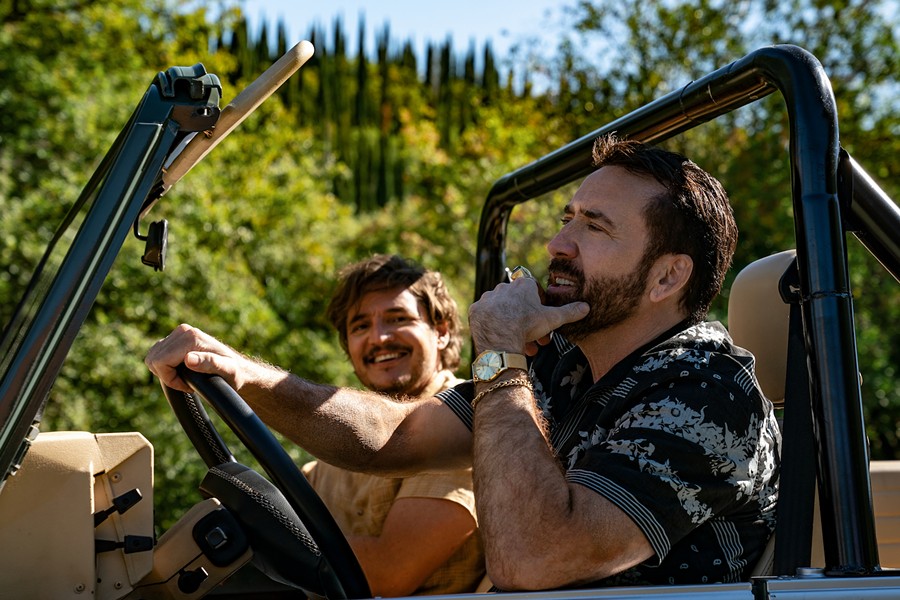 “Nicolas. F--king. Cage.” Those words conjure an idea of transcendent lunacy. If I’m reading the room correctly, Cage is the only actor who has turned doing hundreds of video-on-demand movies a year into an art form. He was ridiculed at first, but perseverance has earned the sort of respect to which “The Unbearable Weight of Massive Talent” pays.

The movie is the result of people noticing Cage again. Admittedly, I’m feeling a little defensive. My cult is potentially being raided. Yes, Cage does a lot of awful movies, but anyone paying attention knows that he’s currently doing his best work at least once every two years. Not a bad batting average. He won his Oscar for “Leaving Las Vegas,” but for my money, as someone who knows intimately what substance abuse looks like, he got far deeper, far more operatic, far more daring, into a lapsed boozer in “Mandy.” He is astonishing in “Joe,” which is sort of referenced here, “Mom and Dad,” “Dog Eat Dog,” and, yes, even in the evil-animatronics movie “Wally’s Wonderland.”

The secret to understanding modern Nic Cage is acknowledging that he’s doing excess as an entryway to the soul. In our relentlessly self-conscious would, the actor seems most concerned with refining his brand, a kind of physical broadness that includes extremely hyper-verbal syncopation. His line readings are often flamboyantly insane, achieving poetry from nothing. The source of his appeal is his unironic commitment. And that’s my rub with “Unbearable Weight,” which traffics in irony.

Though the picture is poignantly affectionate at times, it’s mostly a winky-wink that inadvertently cheapens Cage. It’s a Cage movie that cages Cage. The EXPLOSIVENESS, the strange, volcanic, weirdly personal line readings that Cage aficionados savor as a kind of B-movie jazz, are mostly missing here. In “Unbearable Weight,” he’s doing his “Adaptation” thing: congratulating us for knowing his career and mannerisms. Self-consciousness cheapens Cage. At his best, he’s about irresolute, ugly emoting. His character’s booze relapse, upon learning his wife has died in “Mandy,” is one of the finest and most daring and truthful pieces of acting I’ve personally seen in the last 20 years.

Cage doesn’t play by our rules. He is a superman, once literally up for playing Superman, who speaks in a kind of west coast version of silent-movie poetry. “Unbearable Weight” is about the idea of Cage as not the guy who does Jerry Bruckheimer movies anymore. It’s about Cage showing us he understands that he is often celebrated, and mocked, for his hyper-stylization. As an unabashed Cageholic, I find the spoof-slash-apology superfluous.

Pascal is wonderful here in an essentially thankless role. He may be playing a drug dealer, but he’s meant to reflect the audience’s respect for Cage. He does that and then some, giving fan worship a tinkle of contemporary obsessiveness. Pascal is the opposite of Cage in that you never catch him acting. He throws absurdist curveballs that keeps the legend on his toes. And the legend is receptive. The two dudes have a lovely, unforced chemistry.

Why don’t I like this movie more? Maybe I’m done with meta. “Massive Weight” isn’t a true rager, aka Cager. In even his shittiest movies, Cage is exorcising himself --his devotion to making kitsch real is the entire reason for his current fame. There’s no exorcism in “Massive Weight,” it’s cute and knows what it’s doing. Cage gives a conventionally good performance, but the obsessiveness isn’t here. He does more original work even in forgettable nonsense like “Grand Isle.”

Director Tom Gormican and co-writer Kevin Etten don’t afford Cage even one true catharsis. They are primarily concerned with restoring him to Bruckheimer action status, an aim they achieve. But who wants this profoundly original actor to become a mere action figure again? Probably a lot of people. This movie is for them.