A survey of Richmond coffee drinks on the fall menu.

I used to live for my morning latte, but sadly had to give up coffee years ago in favor of lower-caffeine tea. It never occurred to me I could enjoy that rich coffee flavor in cocktails, but a recent tour of Richmond’s bars and tasting rooms reunited me with the tasty bean.

You probably know the warm, whipped-cream topped Irish Coffee with its whiskey kick. That’s one of two camps that coffee drinks seem to fall into: either coffee spiked with a little something-something, or boozy concoctions tinged with coffee flavoring. In other words, do you want whiskey in your coffee, or coffee in your whiskey?

“I do love an Irish Coffee, it’s hard to beat,” says Brandon Peck, beverage director at the Jasper. “But more often than not we use coffee in cold drinks.”

“There are so many different varieties of coffee, it is really flexible as a flavor,” Peck says. “It can be fruity, floral, bitter, or super-roasty.”

Richmond’s roasters and bartenders are right on trend. I tasted a handful of coffee drinks on several fall cocktail menus, and none of them left me jittery.

You could get one of Brewer’s Cafe bourbon-and-coffee drinks during happy hour, but that’s so traditional. Instead, I started a recent Sunday morning with an iced Bourbon Toast Crunch, and it was an excellent weekend indulgence.

Available hot or cold, the predominant flavor is dark coffee from Red Rooster Coffee Roasting in Floyd County. Cream and simple syrup give it a caffe breve feel. A shot of Jack Daniel’s blends in smoothly, supporting the coffee flavor rather than overshadowing it.

This creamy espresso blend hit me with more caffeine than booze — a much more creative brunch option than mimosas or bloody marys.

This is a grown-up drink, so you’re not going to toss it back. It invites you to settle into the deep banquette seats at the Jasper and sip slowly, meditating on the day’s events.

It’s a booze-forward blend of George Dickel whiskey, El Dorado rum, sherry and coffee tincture from a Rostov’s blend. The Quick Wit was inspired by the flavors in an Old Fashioned, with the coffee tincture standing in for the bitters.

The addition of rum smoothens out the whiskey, and despite coffee’s role in the drink, it doesn’t taste bitter. Swirling around a giant chunk of tastefully monogrammed clear ice, the coffee finish quietly punctuates each sip.

If you’re looking for a double morning jolt, Brunch’s Coffee Old Fashioned will punch you into next week. Jack Daniel’s rye throws a spicy jab, then the Blanchard’s coffee bean infusion follows up with a sharp hook. Maple syrup offers a sweet finish, tempting you to come back for round two.

Coffee has the complexity of flavor to cooperate perfectly between the rough rye and the sweet syrup. It brings the whole drink together and makes you feel almost justified in starting the day with a little coffee in your whiskey. 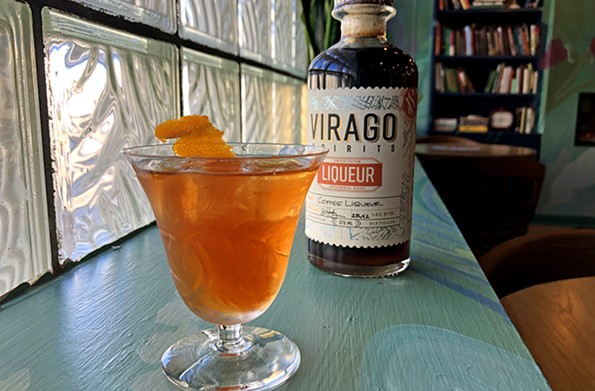 Wolf at the Door
Virago Spirits

Sadly, Virago has already run out of the first batch of coffee liqueur it debuted in September. Virago macerated coffee beans from Blanchard’s Dark as Dark roast and distilled them with clear alcohol. The resulting spirit sat for two more weeks with coffee beans soaking in it, plus a little vanilla and sugar.

Virago did save some bottles for the tasting room, so you can still get one of two cocktails created by Gaelan Rose of Nama restaurant. The Wolf at the Door is a delicious blend of rum, coffee liqueur, banana and cinnamon syrup, and Angostura bitters. I didn’t notice much banana but the cinnamon finish with the slightly sweet coffee taste is outstanding.

Keep a look out for the return of the coffee liqueur — Virago plans a second release at the end of November.

Back to the Coffee Issue