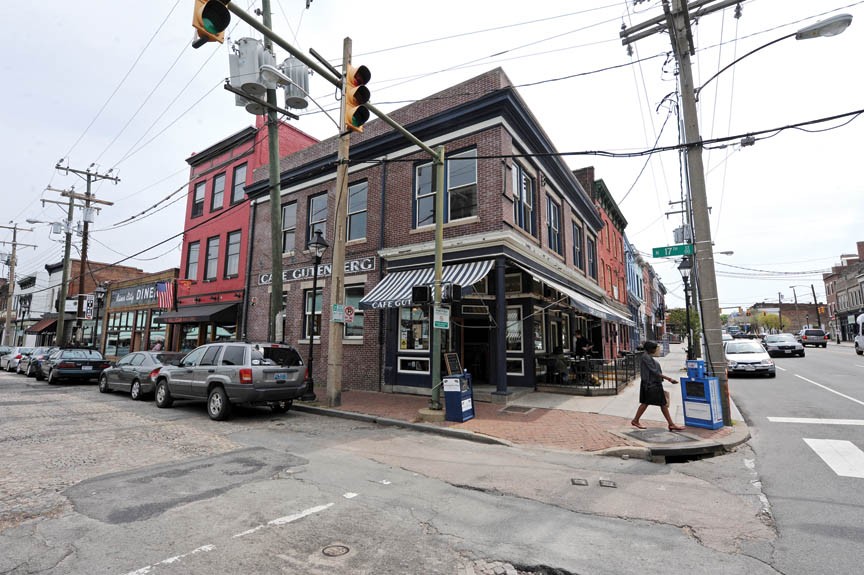 Café Gutenberg has survived floods, City Hall ineptitude and seemingly constant business turnover in Shockoe Bottom. Recent financial struggles amid a recession, however, have left the restaurant's owners looking for an exit.

Jen Mindell, Gutenburg's raven-haired chef and co-owner, says the restaurant is being put up for sale.

This recent winter was "financially brutal," Mindell says, but neither she nor co-owner Garrett Berry considered closing. "We're just passing it off to a successor," Mindell says — "someone who can take it to a level that we couldn't."

Still, Gutenberg's tenuous future may be emblematic of the Bottom, which has struggled in the wake of recent nightclub-related violence and the financial downturn. While Gutenberg's owners say the growing nightclub scene hasn't seriously affected their business — it draws mostly brunch and lunch crowds — the Bottom has yet to fully recover from a devastating flood in August 2004, when Tropical Storm Gaston overwhelmed the city's drainage system and left the Bottom under water.

Having built considerable momentum from an apartment and condo boom along Tobacco Row in the late 1990s, restaurants and shops breathed new life into the Bottom. Gutenberg, which opened in 2003, replacing Main Street Grill, was the showpiece. At the corner of 17th and Main streets, the literary-themed Gutenberg held the Bottom's most visible real estate — seemingly indicative of the area's rebirth.

But problems have been mounting, and not just for Gutenberg. Other restaurant owners in the area are considering relocation.

William "Mac" McCormack, the owner of neighborhood bar staple McCormack's Pub on 18th Street, says that he and a handful of the Bottom's restaurant and bar owners are thinking of moving out of the neighborhood.

Recent years have seen sales at his bar decline to a third of what they were 10 years ago, McCormack says. He attributers part of the problem to unruly throngs of club customers and police efforts to control the crowds.

"The dance-hall ordinance is good for cutting down on violence, but there are still businesses down here that are dying," he says.

David Napier, president of the Shockoe Bottom Neighborhood Association, won't get into specifics, but confirms that he knows of two restaurant owners who are considering picking up stakes.

Don't count Gutenberg among them. Mindell and Berry bought the place in 2008 in the worst recession in decades. The restaurant has managed to survive, breaking even mostly. But now, the owners say, it's time to work on new projects.