Following the death of the family patriarch, the Lafayettes gather at the ancestral estate to sort through the mess and sell it off. But this family has a history with which they have not yet reckoned, and as they sort through their father's hoard, they come across the horrifying relics of a past they'd like to deny, forget or wash away.

With dialogue rich in subtext and theatrical allusion and a soundtrack of chirping cicadas, Branden Jacobs-Jenkins' family drama "Appropriate" explores inheritances, both tangible and intangible. Set in rural Arkansas on a former plantation — land that might not sell due to the presence of two graveyards: one white and one black — the play illustrates how we pass down not only our possessions, but also our privilege and our prejudice.

Cadence Theatre Company's production of "Appropriate" is immediately engaging, moving at a brisk pace, with complex, fully-realized characters, thanks to Anna Senechal Johnson's wise direction and impeccable casting. Johnson has built an outstanding ensemble and drama that builds organically, reveling in all of the small, personal dramas as characters react to one another and to their unfolding family history.

This cast is amazing, and every performance is noteworthy. Susan Sanford is perfect as Toni Lafayette, the divorced single mother who also raised her younger brother and who, in her grief, cannot accept a tarnished image of her father. Tyler Stevens embodies teenage angst as her son, Rhys, who has recently informed her that he wants to leave her home and live with his father. Joe Pabst, who plays Toni's brother Bo, is relatable and lovable, even in his hot-tempered moments. In one of my favorite performances, Jill Bari Steinberg plays his wife Rachael, a Jewish woman who has experienced her father-in-law's racism. Happy Mahaney's performance as long-lost brother Frank Lafayette is layered with nuance and humor, and Kathryn Humphries is perfectly cast as his young hippie fiancee, River. 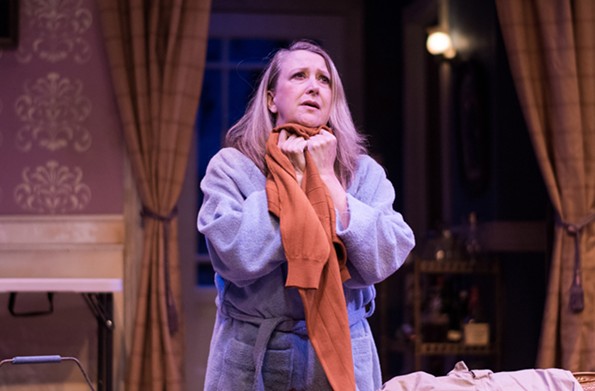 These actors feel like a real family, especially when they're fighting. Josh Chenard's fight choreography is excellent — surprising and climactic, finally breaking the tension that mounts over the course of the play as characters find themselves challenged to confront their own preconceived notions.

In one scene, for example, Bo incorrectly assumes, based on her clothing and the name she has adopted (the culture she has appropriated) that River is Native American. In another scene, Rachael's reasonable suggestion that her father, whose home is filled with racist memorabilia, may have been a racist, leaves Toni feeling justified in spewing anti-Semitic language at her sister-in-law. And in another, everyone except Toni celebrates that some of the racist items they've uncovered might be worth hundreds of thousands of dollars in a niche antique market, without stopping to question the ethics of profiting off these items.

Throughout the play, the adults insist that these relics of the past are inappropriate for young eyes. And yet the young people in this play seem coldly oblivious to the gravity of the things they're seeing. The first family member to lay eyes on the horrific relics is the youngest, Ainsley (Cole Johnson). And it is 13-year-old Cassidy (Grace Connell, Lola Mühlenfeld, or Caroline Johnson) who, with a chilling lack of emotion and an insistence that she is "almost an adult," first suggests selling the items. As Rachael says, the kids learn the significance of these things from their parents. Like the cicadas that surface every 13 years to sing their ancestral song, each generation is responsible for what the next generation will know.

Jacobs-Jenkins' script asks provocative questions, but the answers aren't always clear. These characters do not find a satisfying resolution to their frustrations because there isn't one. This play isn't here to absolve or condemn anyone. It's here to raise the questions, to ask us to challenge our own assumptions. With "Appropriate," Cadence Theatre Company has put together a masterful production of a contemporary classic, not to be missed. S