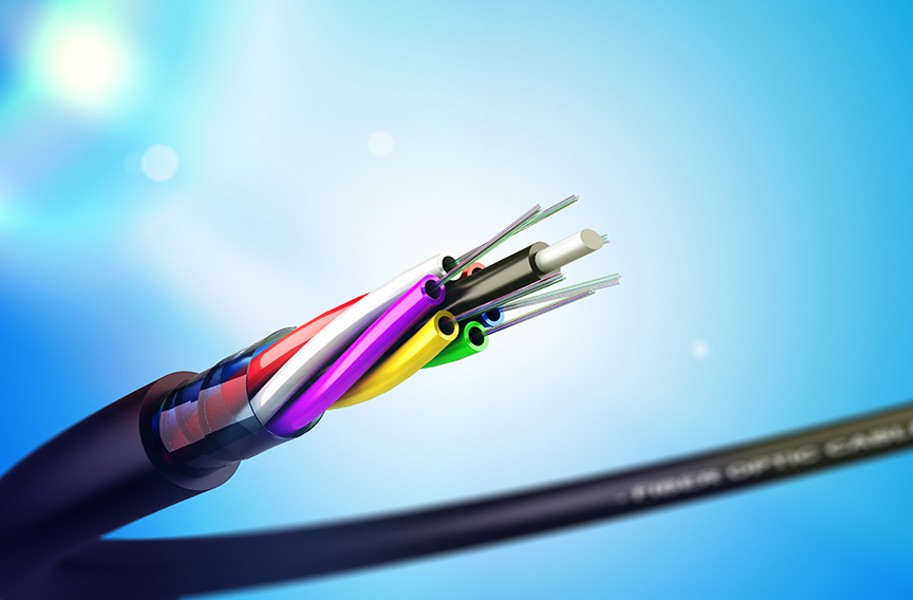 At White Oak Technology Park in eastern Henrico County, shovel loaders and trucks scurry about a series of huge and mostly windowless buildings called a data center that is owned by social media giant Facebook.

There, servers are already powered on 970,000 square feet at the 328-acre complex that will eventually have 2.5 million square feet of working space and as many as 200 employees. The facility will help Facebook users chat and post photos more quickly and efficiently.

It is part of a massive change in the economic landscape emerging in Virginia, which already supports about 80% of global Internet traffic.

Billions of bits of data now flow through Northern Virginia, which in the last two decades has emerged as a leading global location for the air-conditioned data centers. “That’s where the original switching equipment for the internet was and it’s a very valuable concentration where the growth isn’t stopping at all,” says professor Bill Shobe at the Weldon Cooper Center for Public Service at the University of Virginia.

Now, the digital wealth is spreading to other parts of the state including Richmond and the former coal fields of the southwestern part of the state, Shobe says. The Facebook data center that opened partially this summer is evidence of that trend. Amber Tillman, community developer regional manager for Facebook, says that the Henrico center will help the company, which now has 13 data centers, handle expanded use of applications including WhatsApp. Henrico seemed a good fit. “We were looking for a place that’s shovel-ready, has great infrastructure and a great workforce,” she says.

The market is on the verge of a big expansion. The big, boxy centers will become increasingly important with an onslaught of new data demand that is starting to gain momentum. Shobe says it took off about two years ago.

With new 5G cellphones expected to be on the market soon, they’ll need much more data capacity to let people chat, stream movies and handle other chores faster and with better quality, experts say.

Machines that use artificial intelligence to do fantastic new things that only human beings can do now likewise will need gobs of data. One example would be driverless cars that will need to process information nearly instantaneously such has when to stop safely. As the COVID-19 pandemic continues to spread, more workers are laboring at home and need more than usual access to the internet. 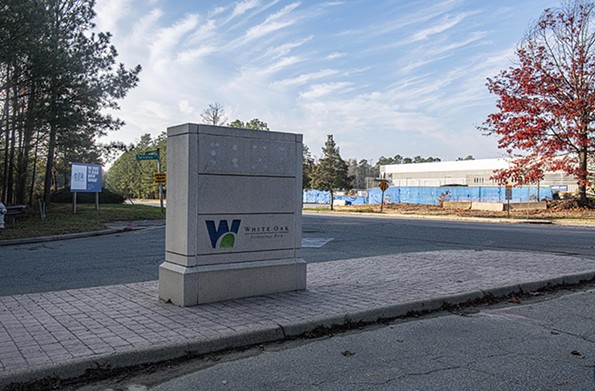 Another plus for Facebook and the Richmond area’s expansion in data centers is a number of new undersea fiber optics cables that are starting to link with far-flung places such as Brazil, France, South Africa and Spain.

The first Trans-Atlantic cable was laid between Ireland and Newfoundland in 1858. The first message it carried were greetings between Queen Victoria of Great Britain and U.S. President James Buchanan. But it promptly failed.

Since then many cables have been in service. The lines are thousands of miles long, run thousands of feet underwater. Several of the new ones pop up on land at Virginia Beach at points such as Camp Pendleton and Sandbridge, a popular resort. Two of them – MAREA from Spain and BRUSA from Brazil – will terminate at a building just across the street from the Facebook center at Sandston in Henrico County.

One new cable, the DUNANT project, led by search engine company Google, went online about two months ago. It handles data from France to Virginia Beach.

“The DUNANT subsea cable (Google) is the fastest in the world.  It has 12 fiber pairs and capable of transmitting 260 TB (terabytes) per second,” says B. Anthony Hall, deputy director at the Henrico County Economic Development Authority.  A terabyte is one trillion times the data as the basic byte.

“We’re in a position to be more competitive than ever before,” says Gary McLaren, the retired head of the Henrico authority, who helped set up the deal with Facebook that included generous government incentives.

The new data centers are driving another change. The companies that are building the centers tend to be West Coast technology pioneers such as Amazon, Apple, Google and Facebook. 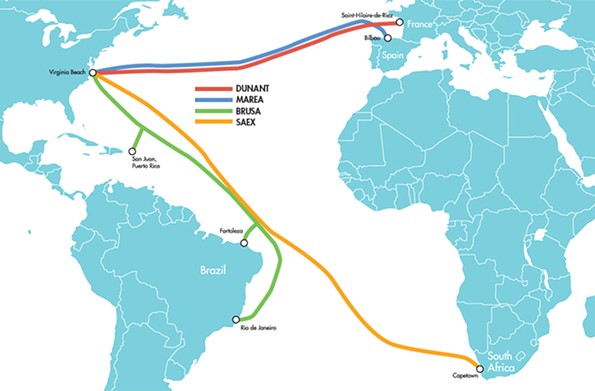 Their ecology-minded chief executives, such as Jeff Bezos of Amazon and Mark Zuckerberg of Facebook, have a different outlook on powering their data centers that need tremendous amounts of electricity, notably for air conditioning, to keep long lines of computer devices cool.

They are insisting that the energy come from renewable sources such as solar, wind and hydroelectric.

Not long ago, big companies coming to Virginia could care less what ran their power as long as it was cheap, available and reliable. That almost always meant more energy from coal and natural gas and, to an extent, nuclear.

Not so much anymore. Dominion Virginia Power, once powered to a great extent by fossil fuel sources, has worked with companies such as Facebook to greatly increase renewable sources so the state can be carbon free by 2050, as new legislation requires. The state goes on a cap for carbon dioxide emissions Jan. 1.

Tillman says that Facebook has worked with Dominion to make sure that 100 percent of the Henrico facility is powered by renewables. The arrangement calls for Dominion to replace the 500 megawatts the facility will use with renewable energy, notably from new solar farms in Surry and Westmoreland counties.

Pressured by green-friendly companies like Facebook and more progressive legislators, Dominion has made a wholesale shift to greatly expand its green energy.

On wind power, Dominion will activate two wind turbines off the coast by the end of this year. The utility is part of another program to have around 180 offshore turbines producing 2,600 megawatts by 2026.

And Dominion announced it was canceling the controversial Atlantic Coast Pipeline this summer. It would have transported natural gas obtained by fracking from West Virginia through a large part of the Old Dominion.

But some environmentalists like Ivy Main of the Virginia chapter of the Sierra Club see problems with data centers. Pushing green energy is helpful and provides a limited number of new jobs. But she sees the new arrivals’ impact on Dominion’s new interest in renewable sources as “mostly wishful thinking.”

She adds: “We would need to see thousands of megawatts of solar being built every year to match data center demand, and we’re not.”

The Richmond area hasn’t always had great success with high technology electronics. In 1995, local and state officials announced with great flair that electronics giant Motorola was planning on building a $3 billion semiconductor plant at West Creek in Goochland County. It was expected to employ as many as 5,000 people.

Some analysts were skeptical about the project. While computer chips can be difficult to design, making them is not especially hard. The skills are easily transportable to countries with lower labor costs. The market for them can be volatile. In 1998, Motorola pulled the plug on the plan.

About the same time, another chip plant was planned at White Oak Technology Park in Henrico. Germany’s Siemens and Motorola built a plant employing 1,500 people. After corporate issues, a new company called Qimonda was spun off and it would operate the Henrico plant.

Things got ugly in 2009. About 1,500 workers were laid off when Qimonda filed for bankruptcy. Former employees were told they would not get their severance benefits. They protested at the facility when it was reported that more than 40 high-ranking officials got bonuses while rank-and-file benefits were sliced. Virginia populist politician Joe Morrissey attended the demonstrations in support of the workers.

By coincidence, Kansas-based Quality Technology Services that owns data centers in several states took interest in the Qimonda building. It bought it and transformed it into a data center. Plans were drawn up for the MATEA and BRUSA undersea cables to terminate at sites at the Henrico facility. 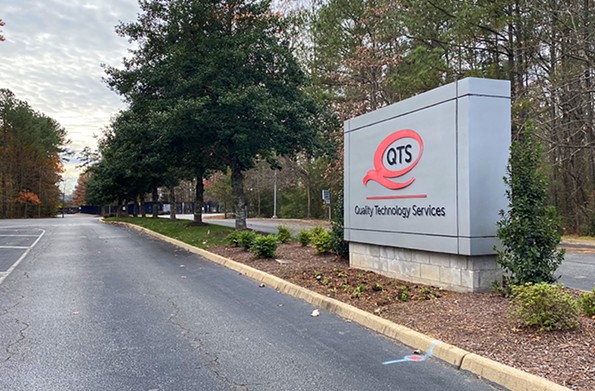 As the chip problems in the Richmond area played out, the Northern Virginia market ramped up quickly. The epicenter of the movement is in Ashburn and stretches to include Loudoun and Prince William counties and includes a big concentration of data centers.

Plusses include proximity to federal government users. In Northern Virginia, the internet was hatched at the Defense Advanced Research Projects Agency, known as DARPA, to make Pentagon communications faster and more robust.  Startup companies such as MCI and America Online rearranged the monopolistic communications industry.

In Virginia, land is available. And, electricity, most of it provided by Richmond-based Dominion, is relatively cheap when compared with utilities in the Northeast or California. It is a good deal for Dominion, says Shobe, because retail electricity sales are flat and commercial sales to businesses other than data-related ones are starting to decline.

As Northern Virginia became more saturated with data centers, the Richmond area picked up more of them. The new undersea cables help because they will offer an alternative to the traditional that terminate in New Jersey and New York. Some of them are wearing out, says Raymond White, business development director with the City of Virginia Beach denies that.

The Northeast’s vulnerability was displayed in 2012 with Hurricane Sandy, which killed 233 people and did more than $68 billion in damage, mostly in that region.

The storm shut down power for days in the greater New York area.  “It made it clear we needed a redundant system,” says Kelly Newman, general manager of the Virginia Beach branch of PointOne Development Corp., which is working on a cable project that will link the coastal city with South Africa.

Oddly, Virginia Beach does not have large data centers. Henrico officials say that’s because the city is right on the ocean, is likely to be a hurricane victim and eventually may be inundated by water with global warming. White of Virginia Beach denies that.

Environmentalist Main says that one of the problems with data centers is that they permanently employ few people while the data center owners get big tax breaks and benefits. “The state loses huge amounts of money on tax incentives it showers on data centers (query how smart that really is), but local governments like Loudoun reap the windfall,” she says.

According to the Henrico Citizen, Henrico County slashed its data center tax from $3.50 to 40 cents per $100 of assessed value in 2017. The change made the tax the lowest in the state at the time and serves as an inducement for more expansion of data facilities.

Main also notes that while the huge centers – the really big ones are called hyperscaled facilities – likely will use renewable power, they will switch to smoky and polluting diesel generators if the electricity shuts off.

Another problem is that the data centers occupy lots of land. The Piedmont Environmental Council based in Warrenton has long been wary that centers will spoil views and will encourage utilities to erect big transmission towers that would mar the countryside.

On the bright side, data centers, while not really creating all that many new jobs, do contribute to tax bases and can be touted as a draw for related companies to take interest in the Richmond area and a wider part of Virginia. They can do much to replace older manufacturing businesses.

Perhaps the biggest benefit may be the high-tech push for renewable energy: “That’s a really good thing,” says Shobe at the University of Virginia.