The new executive director of the Byrd Theatre, Stacy Shaw, talks about the future of Richmond’s movie palace. 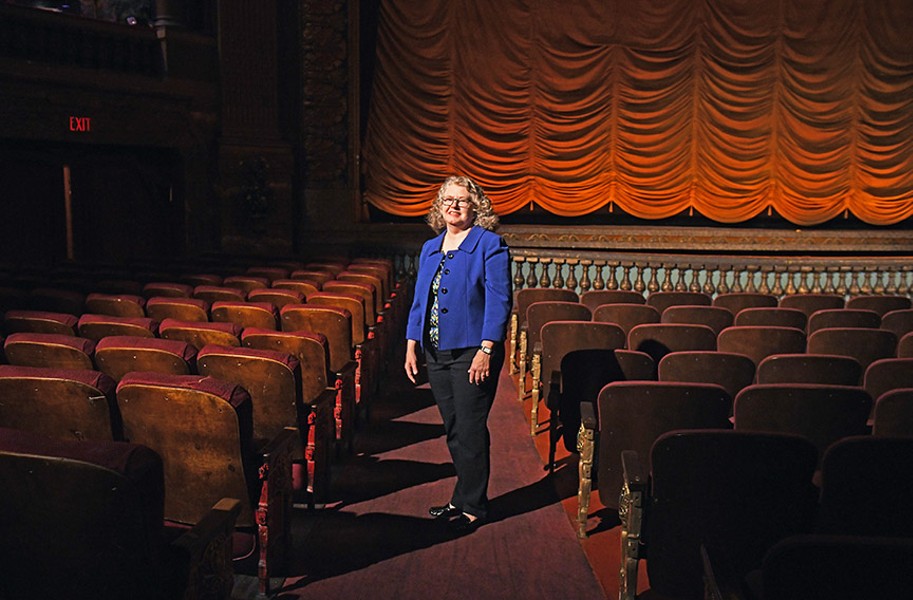 While the pandemic continues to wreak havoc with our lives, Richmond’s crown jewel movie palace, the Byrd Theatre, is trying to keep focus on its future.

As of July 1, that effort includes a new executive director with three decades of experience as an arts administrator, most recently as the director of institutional advancement spending at the National Theatre in Washington. Stacy Shaw also has worked in the past at the Wells Theatre in Norfolk, so she’s well versed with many of the issues that can arise in historic theaters.

Like all movie theaters, the Byrd has been hit hard by the lack of audiences, which meant it had to lay off most of its staff except for projectionist Damion Champe and Shaw. While the Byrd remains closed, there are a number of current ways to support the theater, from virtual screenings at home to renting out the marquee for celebratory messages.

In addition, there’s a movie lovers’ club for $10 a month that provides a reusable tumbler for free fountain drinks when the Byrd reopens. And soon a movie party rental program will allow people to bring friends and family to the Byrd as a “quarantine pod” and enjoy a private screening safely. (Hmmm … maybe I can finally hold that screening of “Rubin and Ed” or “Blue Sunshine.”)

Recently Style spoke with Shaw, who lives with her wife in Petersburg, about her vision for the future and what lies ahead for Carytown’s greatest attraction.

Style Weekly: Tell us a little about yourself.

Stacy Shaw: I’m originally from South Carolina, although I’ve worked in major cities around the country: Atlanta, Denver, D.C., Norfolk. My master’s degree is in theater management from Virginia Tech, from a long time ago [laughs]. This is what I’ve always wanted to do. I particularly enjoy making the experience great for patrons and the artists involved. I’m happiest coordinating things; I’m not someone who craves the spotlight.

I also did teach for a while during that time, running an undergrad program in arts administration at the College of Charleston, then left and took a position at the University of Alabama and ran their MFA program in arts administration. My home base has been in Petersburg since 2013; my wife teaches at Virginia State University. It reminds me of how Charleston used to be when I first went there as a child [in the pre-tourism boom days]. Everybody knows everybody

Oh, a lot! The only category I personally am uncomfortable with is horror movies. But I know a lot of people love them, so that won’t affect programming. But I tend more toward serious movies, I suppose. I love documentaries and a good story.

I’ve seen everything at the Byrd from blockbusters to art films and lost cult classics, live concerts to comedian Margaret Cho or director John Waters, Pere Ubu performing a live sci-fi soundtrack ("X:The Man with the X-Ray Eyes") to important community events such as the devastating Harvey Family memorial, which seemed to transform the entire building into one sobbing heart.

What is your vision for the future in terms of events?

It’s a local business, a nonprofit. One of the missions is to keep it accessible, in terms of ticket prices. I’m personally new to the Byrd, but the family I married into has been coming here for several generations. That’s a lot of responsibility to be the best steward I can be. … My vision is really to continue on the track that it’s been. We are fortunate that we can provide something for everybody, while offering a diverse mix of opportunities, as you said. The board has been engaged in strategic planning, which has been helpful in terms of guiding the organization forward. I think there are lots of ideas, but the community can count on the Byrd still being the Byrd.

Right now the Byrd is closed because costs of operating under COVID would be too high, correct?

Yeah, we did survey of our patrons and what we heard back is what you’d expect from most places. About 30% said, “we love you guys, but we’re not coming back until there’s a vaccine.” The other 70% said “we love the Byrd, we miss coming there, but are not quite ready to return.”

Without the ability to count on people, plus the increased cost of the PPE, the numbers don’t really work. [But] we are taking advantage of the time to do as much as we can. A lot of cleaning has been done, replacing light bulbs. The Wurlitzer piano, which is quite rare, has not worked well for 50 years. Over last 13 months, it was sent off piece by piece to Tennessee and rebuilt, so it was re-installed up in that alcove, and it now works perfectly. We’re excited about that. It’s [operated] by the other Wurlitzer organ. We are planning to do a Facebook live mini-concert soon.

Can you talk about the layoffs of most of the staff?

I had to do that right after starting, unfortunately. That was not pleasant. Unfortunately, like a lot of places, especially theaters, we weren’t able to reopen and there was no work for them to do. It was not something we wanted to do. We’ve applied for everything the federal government has offered: We did get a PPE loan, we used almost all of that to pay staff for 10 weeks, not just the eight weeks. Then we just couldn’t continue.

There had been rumors online that some had been laid off because Black Lives Matter had been put on the marquee? Those are false?

No one was let go, or even threatened, for doing that. Thanks for the opportunity to clear that up. Emotions have been heightened. We support the Black Lives Matter movement and people of color. It’s sad we had to cancel all our Pride events for June. … Social media can be great, but it’s also a source of great disinformation. The people who were let go, it was completely for financial reasons.

Will any of those people be hired back?

I did ask anybody who was interested in coming back to let me know, when that day comes. I left that door open, and I’ve heard from several people.

Has there been any talk of first-run features at the Byrd?

All we have at the moment are virtual screenings. I know we did really well with the first run of “Uncut Gems.” There remains a lot of conversation about whether something like that will happen again. I can’t say it’s a top priority at the moment, I want to get us back open and then we’ll focus on more forward. Amongst everybody on the board, we talk about it, but there’s no real consensus about it, it’s an ongoing question.

What are the challenges in terms of raising funds?

My approach to fundraising is really toward people who feel the same way you do about the Byrd [personal memories] and want to support it. People were asked the top four things they’d miss if they left Richmond, the Byrd made the list. … But of course, these are challenging times during a pandemic. We understand there are needs across the community to be addressed. People need to be healthy and OK. Raising money in the arts, you know that and understand it, but you sure do appreciate the people who find a way to support during those difficult times.

Naming rights is a standard practice and something available quite often. I’ll say having come from the National in Washington – it’s the second oldest theater in the country, from 1835. … [but] there are patrons that understand things like HVAC and life expectancies of systems – the behind-the-scenes things. Those are my favorite donors. Its not exciting to talk about, but it needs to happen.

Are there other similarities between that building and the Byrd?

Oh gosh, yes. The architecture – the Byrd is the most beautiful theater I’ve worked for. But the maintenance of older facilities like this, it did prepare me being at the National and focusing on capital improvements. That’s mostly what I raised money for, while we were also able to raise our programming support. I’m looking at everything that needs to be addressed. I know a whole lot more about capital improvements than I once did (laughs).

Do you know of any local festivals being dropped at the Byrd?

No, we’re working right now to forge reopening when we can, when people are comfortable. We continue to work with all the festivals we worked with in the past. We’re solving issues on our end.

I was excited last week when we were able to do testing on the seats with a cleaner that kills COVID in a minute and doesn’t damage fabric. I’m learning a lot about these cleaning solutions [laughs]. This cleaner is certified now to kill COVID on contact – its called Victoria Bay. We tested the old and new seats, and it worked without damage. But Heather [Waters] from the Richmond International Film Festival got me in touch with those folks. When we reopen, we will be ready with all the proper PPE in place.

Do you have a top-three-type wish list, for things that need to happen at the Byrd?

I’m so focused right now on the renovations that money has already been raised for, most of it patron safety. That will be happening next year, renovating the women’s restroom and the concessions area, as well as some of the backstage areas. I think over time, patrons will see improvements and space clearing up in the lobby.

But we certainly need to finish the seats – that’s way up there. It’s a good start getting the center section done. That’s one of the main things. There’s additional systems work that needs to happen, to help keep the facility more stable in terms of humidity (that was a big problem at the National as well). With more heat, which is the way of the future, things need more work. Also the marquee and some of the areas that look aged.

This building needs some love and care.