Two days of music, comedy and “anything goes.” 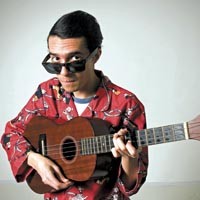 Forgive me if I can't sing,” says Herschel Stratego, a 23-year-old ball of energy and self-deprecating humor, whipping out his ukulele at the not-quite-deserted coffee shop and breaking into a catchy, melodic song that ends far too soon. “I'm a tall, handsome man, just part of God's plan,” Stratego sings, with feeling.

“It's about the guys who get everything,” he says. “They tend to be tall and handsome and people think they're charismatic, but really, they are just tall and handsome.” He laughs at himself. “I'm a man, I don't know what my feelings are. Usually I'm thinking about whether or not ‘Ghostbusters 2' is on. My first song was like, ‘Look at me, I'm so cool, I'm an organ donor.'”

Stratego may invite laughter directed both at and with him, but the ways in which he achieves this goal are multifaceted. Interested in the idea of the entertainer as a multitalented blend of artistic, musical and comedic tricks, Stratego first performed in front of an audience at an Elvis tribute at Oregon Hill's Neon Rat in 2007. “People came up and said ‘That was terrible' and I appreciated the honesty,” he says.

He's since performed his oddball blend of stand-up comedy, ukulele and tap dance at Gallery5, the Camel and the Funny Bone, each act culminating in a punishing bout of what he calls PMS, or postmusic syndrome. “Looking back I realize all the important stuff I missed. I always regret the set,” he says. “I can't think straight. But some people have bad taste so they're going to like me. I could never perform for a long time, I feel like I'm wasting people's time. I have about 30 minutes of confidence in me a month.”

But Stratego isn't just another sporadically performing college kid scheduled to receive an English degree from Virginia Commonwealth University this winter. He's the mastermind of a two-day event at the Firehouse Theatre featuring more than 40 different acts of art and performance. The kaleidoscopic herschFest raises money for Avert.org, an international AIDS charity. The nonstop smorgasbord of local talent allows audience members to come and go as they please, while being entertained by a combination of live music from the likes of Alison Self, the Spirit Fingers, Splork!, the Milk Stains, Hot Lava and Prabir Mehta as well as numerous DJs, animated and independent films, stand-up comedians, storytellers, and spoken-word and visual artists.

“I'm interested in the desegregation of the arts,” Stratego says. “When people go out they expect only one thing. It's as if you're classifying them, in effect ordering them to fall into one category. HerschFest is my own little candy store. I mean big. ... my own big candy store. And I'm the kid, unsupervised.”

On the second day of herschFest, filmmaker Joey Tran, a 2004 graduate of Virginia Tech, will debut his 18-minute film, “Santo Diablo,” a comedy noir suspense film about a couple who steal a bowl of chili. Although he's collaborated with Stratego before, Tran says he's excited about the size and scope of the Firehouse event. “Herschel picked everyone so it should have some sort of connection or commonality,” he says. “We might never know what it is though.”

Is herschFest the beginning of an annual tradition or a one-time thing? “It depends,” says Stratego, who emptied his personal savings account to pay for the festival. “If there's a big fight or we have to deliver a baby, then no. If it's fun, then maybe.” S

The Firehouse Theatre plays host to herschFest on Dec. 4 from 6 p.m. to midnight and Dec. 5 from noon to midnight. Tickets are $5 and will be sold at the door. Proceeds go to Avert.org. To sponsor the event and for a complete schedule of musical acts and events, go to herschfest.org.