After a health scare, former Richmonder Andrew Leahey and his musical career are back on track. 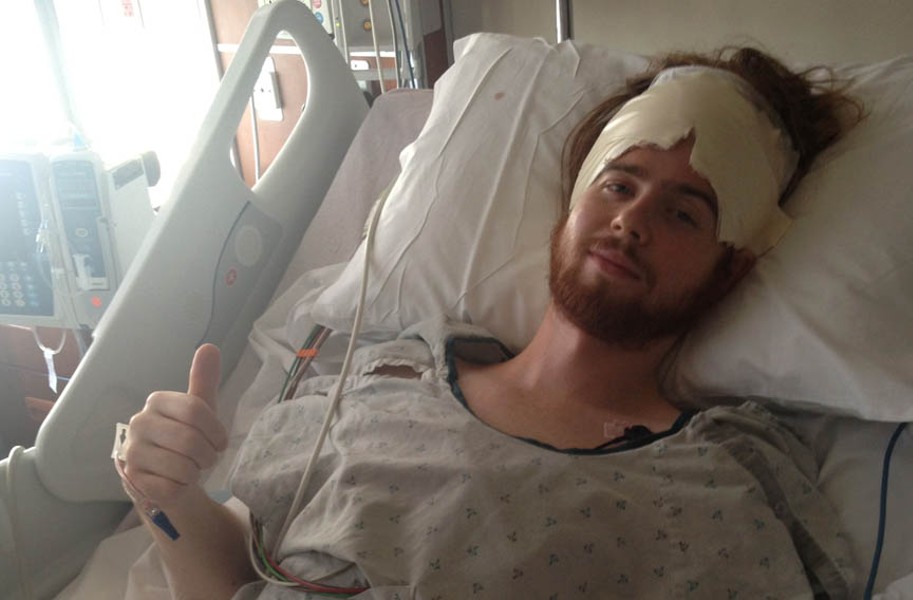 Emily Leahey Nashville transplant and musician Andrew Leahey in his hospital bed after recent surgery to remove a brain tumor.

When singer and songwriter Andrew Leahey was diagnosed with a brain tumor in November, he was facing not only serious health risk, but also the loss of his livelihood. "A musician can't lose his hearing," Leahey says. "He just can't."

The Richmond native, who lives in Nashville, has been gaining national buzz on the indie rock circuit with his band, the Homestead, which features members of Richmond bands including the Trillions, Exebelle and the Rusted Cavalcade, and David Shultz and the Skyline. Last year, Andrew Leahey and the Homestead played 60 shows in six months, recorded a Daytrotter session, and played to packed crowds almost every night.

When the tour wound down, Leahey noticed his right ear was bothering him. "My hearing decreased by 50 percent overnight," he says, "and it felt like someone had stuffed cotton into my eardrum and taped the whole thing shut."

A doctor thought a virus was attacking his eardrum, so Leahey was put on enough steroids to "reanimate a dead person," he says. He hated the steroids, but they turned out to be a blessing in disguise. While driving one weekend, Leahey stopped to get gas. He passed out in the parking lot because of his body's inability to handle the medication.

"I hit my head during the fall," he says, "which convinced the doctors to give me an MRI. When they did that, they found a tumor sitting on my right hearing nerve."

What Leahey had was an acoustic neuroma, a slow-growing tumor of the nerve that connects the ear to the brain. Doctors told him that if he didn't have it removed, it would take away the hearing in his ear. The tumor also could get bigger and push against his brain stem, which ultimately would kill him.

Without that MRI, he says, "it might have been too late."

Because of the invasiveness of the surgery, Leahey had a 50 percent chance of waking up from the operation with no hearing in that ear. He was in surgery for 10 hours followed by a three-day hospital stay. "I woke up around 5 or 6 a.m. feeling drunker than Randy Travis," he says. "People kept asking me questions, like 'What year is it?' or 'Can you blink three times for me?'"

His recovery time was much longer, and while his ear healed he was hearing everything in two different pitches. Leahey says he felt he'd been reduced by the operation. "In one day, I basically devolved from a fully functional adult into someone who couldn't walk, cook or shower without someone's help," he says. "I wasn't allowed to pick up anything heavier than a carton of milk, so I couldn't really play guitar."

Aside from working with a Nashville-based management company, Leahey handles all the Homestead's operations — booking shows, writing press releases, scheduling practices and fixing the van. "I was basically forced to push 'pause' on all of that stuff," he says. "I was stuck at home."

But what Leahey could do was write songs — and he wrote a bunch. Leahey says the recovery went much faster with his wife and friends by his side, offering meals and daily visits. In December, friends and recording artists such as Jason Isbell, the Wild Feathers and others held a benefit concert in Nashville to help assist with medical bills.

Only three months since his surgery, Leahey is back on the road with the Homestead, playing dates through March. That includes a stop in Austin, Texas, for South by Southwest. "I'm feeling surprisingly good. I still get migraines every day, but those can be treated with meds," he says, laughing. "Thank God for the meds."

Leahey wasn't going to let brain surgery stop him from doing what he loves, he says. In the weeks leading up to the operation, the singer says he kept wishing that he'd played more shows during the past year. "When I got the tumor diagnosis, I realized that all of that could go away," he says. "I realized that being able to play music isn't a right, it's a privilege, a blessing."

Leahey promised himself that once he was better, he wouldn't waste any more time worrying about how to make his music career work. He was just going to do it.

"I feel like I just got a second shot at this whole music thing," he says. "And I've never wanted to play music more than I do right now." S

Andrew Leahey and the Homestead play with the Atkinsons at Hardywood Park Craft Brewery on Saturday, Feb. 15, from 5-9 p.m. It will be Leahey's first Richmond show since his operation.