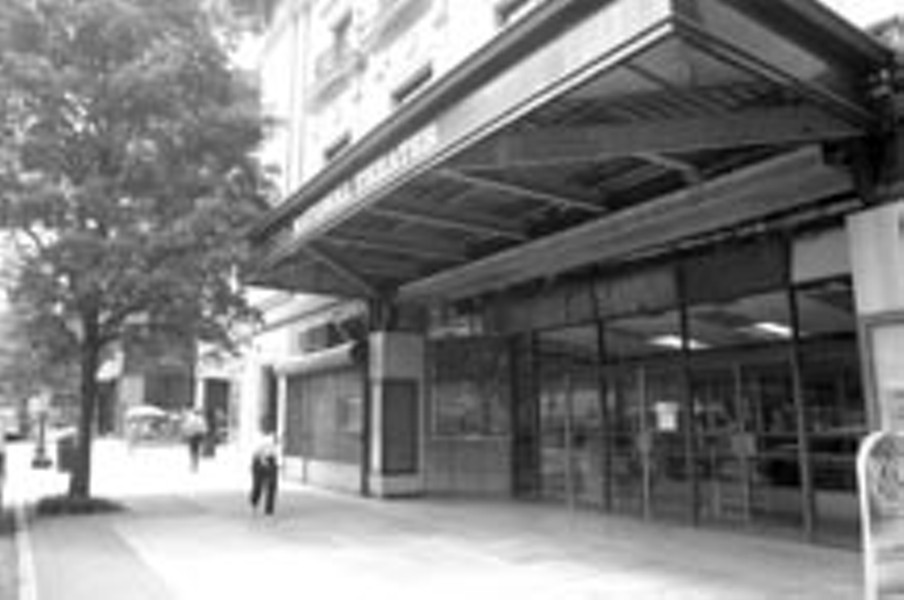 "We've got heavy hitters behind us," Robinson says, referring to his partners, Bill Parsons of WinPar Hospitality in Florida, Pyramid Development in Richmond and La Quinta, the hotel franchise. "We're ready to do something now."

Robinson isn't the only one with his eyes on the National Theatre. In the past year, another local developer had an option to purchase it following a brief due-diligence period. But the option expired in February and the buyer walked away. So did others. In the past year, five to 10 potential buyers have floated bids on the National, says John Owen Gwathmey, president of the board of trustees of Historic Richmond Foundation.

In the deals that received serious consideration, people close to the negotiations say the bidders ran into a common obstacle: the Virginia Performing Arts Foundation, which intends to purchase the property as part of its grand performing arts complex downtown. The arts foundation's future plans for the property, these people say, have stymied private investment in the theater, built in 1922.

The problem, these people say, is that developers cannot secure long-term commitments from tenants who might use the space — groups such as the Richmond Ballet and the Virginia Opera. That's largely because of the uncertainty of the planned arts complex, particularly the first $93 million phase of the project. The foundation's role as an umbrella organization for the arts community added an extra layer of bureaucracy, some say, making it difficult to secure commitments from individual arts groups.

There is also the desire of the arts foundation to control the National Theatre. Owning the theater has always been a part of the foundation's plans, but the organization has "stood on the hose," one source says, and has yet to pony up the cash. Robinson says he reached out to Brad Armstrong, president and chief executive of the arts foundation, and expressed a wish to work closely with the arts group. He says he promised the foundation first rights of refusal to rent the facility once completed.

"He said the board's not considering it," Robinson says.

Richmond developer Sam McDonald also expressed serious interest in the property. McDonald didn't return calls for comment by press time. However, a source familiar with the proposal says McDonald's plan didn't include a hotel, which pleased officials at Historic Richmond Foundation, who want to preserve the theater's architectural significance, but did call for retail and office space on the first floor. That proposal nearly stuck. McDonald got an option on the property — the price: $1.5 million — and proceeded to put together a financing plan.

But there was a hitch: Arts tenants wouldn't commit.

"Brad and his guys are the thousand-pound gorilla right now," says one person close to the negotiations. "None of the performing arts entities were willing to make any commitment because all of them were hoping to get into the big hall. It was almost as if it was a paralysis of decision making."

Armstrong was out of town and couldn't be reached for comment by press time. Sources, however, say the arts foundation wasn't pleased that McDonald's group received an option on the theater.

Gwathmey says the property hasn't sold mainly because his board has been unwilling to allow potential buyers to alter the theater's footprint. The economics of running a theater aren't easy, and several proposals involved shrinking the 1,000-seat theater significantly or turning the space into offices or retail.

"Historic Richmond has not sold the National Theatre because we have not found the right buyer," Gwathmey says. "It's probably our fault. We are insistent in keeping the theater intact." Gwathmey agreed that the main obstacle for some potential buyers of the building has been the uncertainty over the theater business.

He declined to discuss any current negotiations — with either private developers or the arts foundation. But he says the arts foundation's plans for a performing arts complex haven't influenced the potential buyers he's talked to.

"Ultimately, we would like to see the theaer fully restored and used again as a performing arts center," Gwathmey says. "I am confident that we will be able to find a buyer." S