With sneakers and swag, Kicks Boomin caters to the latest streetwear trends. 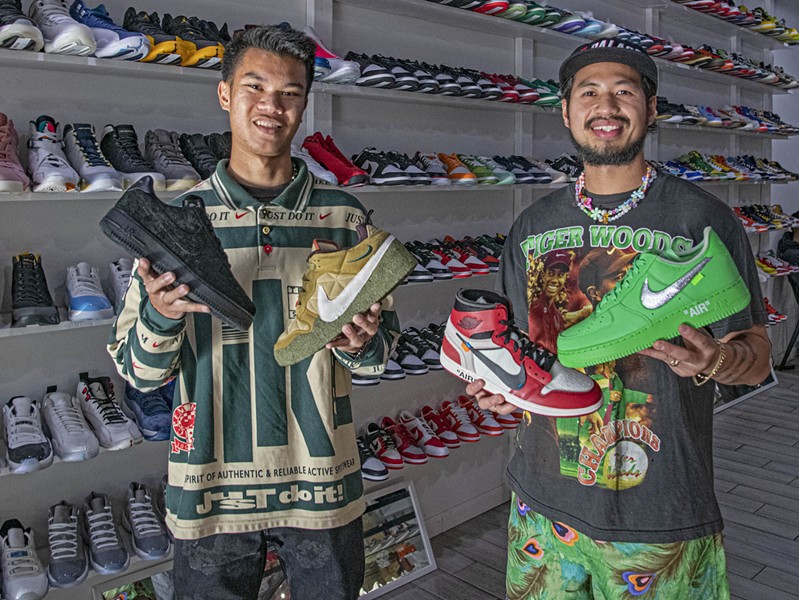 It’s common for entrepreneurs to spend years hustling before they can afford their first ever brick-and-mortar. Most don’t move their business into a storefront at the age of 17, however.

In December 2020, when Alex Sam opened Kicks Boomin on Broad Street with his business partner, Thomas Vu, he achieved just such a feat. In the two years since, their sneaker and swag shop has become an icon of the bustling Richmond streetwear scene.

As a descendant of Cambodian refugees that escaped the Khmer Rouge’s genocide and fled to America in the 1980s, Sam may have inherited his elders’ hardscrabble knack for not only surviving, but thriving through hard times. His love for sneakers first took root in middle school when conversations about the latest basketball shoe release helped him to fit in. During high school, his passion for pumped up kicks transformed into a business.

By thrifting shoes, refurbishing them, and making $20 to $40 dollars per pair, Sam slowly built up a nest egg of earnings to move up in the sneaker scene and start buying and selling brand new shoes as well. Kicks Boomin began in 2016 as a small Instagram handle that gradually evolved into a limited liability company a year later.

Sam credits his rapid success to his mother’s struggles as a single parent.

“Growing up, I always had a business drive in me,” he says. “My mom used to own a salon. I didn’t want to see her struggling to support me and my brother. It pushed me to make sacrifices. I didn’t have a normal childhood. I didn’t have a prom or homecoming. I worked through it all, so I'm glad to be where I'm at today.” 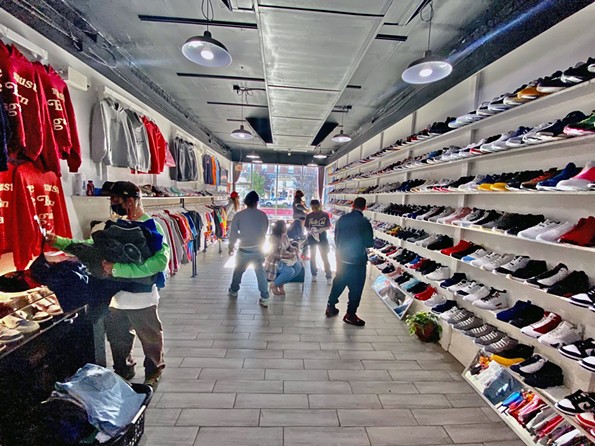 For four years, Sam grew his business out of his childhood bedroom. Eventually, the amount of merchandise he was moving required a storage unit. When his sales volume began to strain even the storage unit’s capacity, he knew a physical location would be his next move.

“In 2020, after businesses on Broad Street got looted, that’s where I saw an opportunity to bring a store to Richmond,” Sam remembers. “I was graduating high school at that time and I knew I loved the shoe game. To take it to the max, I knew I needed a storefront.”

Sam couldn’t do it alone, however. That summer he met Thomas Vu via Instagram, and the next day the two met up at Sam’s storage unit. After talking for a few hours, they decided to team up and open a shop together.

“It’s very weird for two strangers to meet up and immediately start a business together,” admits Vu. “But I called Sam one night, we decided to partner up, and it’s been great since.”

At 29, Vu is also a fresh face. During his time as a student at Virginia Commonwealth University, he started thrifting hard to make ends meet and eventually landed a job at the legendary Round Two apparel shop on Broad Street, which helped kickstart the local buy, sell, trade retail movement.

When his employer got looted and torched during the uprisings after the police murder of George Floyd in 2020, Vu wasn’t sure what to do with his life.

“I had a kid and a house, so it was a big risk to open a store with a stranger in the hopes that it would be prosperous,” he says. “But since then everyone has seen that we know how to run our small business.””

Although the majority of their products draw on nostalgia for the ‘80s and ‘90s, Sam and Vu don’t limit their selection to any one era or style.

“With our streetwear we want to have something for everybody and not limit it,” says Vu. “The style is ever changing. You never know what people want, what’s a fad, and what’s going to stick around for a while. We just want to sell things at really good prices.”

Every weekend, Kicks Boomin offers a selection of “Saturday steals” where they sell products worth hundreds of dollars for less. The event draws a crowd each week, but even on a Wednesday morning, the shop frequently sees a small line form outside before their 11 a.m. opening. Acid washes, holes in the knees, cool graphics from sports to TV to music — Kicks Boomin caters to the latest trends at prices young people can afford.

“We’re breaking the mold of the affordability factor,” Vu says. “I was a student as well. It’s not easy. That’s why we focus on offering fairly priced clothing at rates of $10 to $20. It’s not normal for the industry we work in, but just making that dude or girl’s day is what matters most to us.”