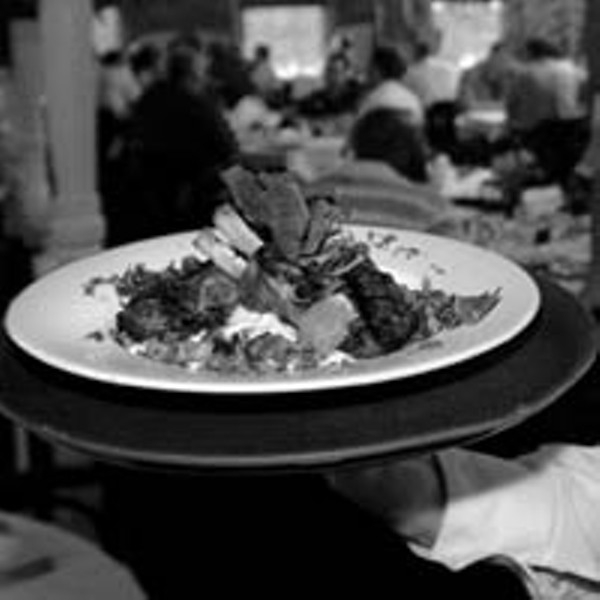 But the food is not the primary attraction. The Tobacco Company is an entertainment venue. Most nights, bands play in the lounge next to one of the liveliest bars in town.

The best entertainment, however, is the building itself, as renovated by founder Jearald Cable, who hunted down objects d'art throughout the East and Midwest for its opening in 1977. Although he spends a lot of time in California these days, Cable keeps a home in Richmond so he can look in on his money machine.

An antique, tiled-floor, brass Otis elevator that came from the Con Edison Building in New York takes diners to second- and third-floor dining rooms, which also can be reached via a winding staircase salvaged from the old St. Luke's Hospital in Richmond. The elevator climbs a wall of the dramatic three-story brick atrium with a magnificent brass chandelier that formerly hung in the Federal Reserve Bank in Cincinnati.

The on-premises director of operations is longtime employee Jack McNamee, who oversees a staff of 160 (including two shifts of 11 persons in the kitchen), which is under the supervision of German-born chef Reinhardt Mielke, who joined the company two years ago from the Memphis-based Peabody hotels.

Most dinner entrees are in the mid-$20 range; appetizers range from $7 to $10. Lunch salads and sandwiches cost from $6 to $12. The Sunday brunch features a Southern breakfast platter for $10 that includes a glass of champagne.

The most-ordered dinner entrée is chicken Chesapeake. It's a grilled chicken breast topped with crabmeat, Shitake mushrooms and sundried tomatoes in a sherry cream sauce, accompanied by sautéed spinach and roasted garlic mashed Yukon gold potatoes. The ingredients make for a fine combination, even though there is precious little crabmeat.

Those with large appetites should not pass up the slow-roasted prime rib of certified Angus beef, a thick and juicy cut for which second helpings are offered.

A large portion of grilled Chilean sea bass, offered Szechwan style with wasabi aioli, was marinated but is a bit tough. It comes with Asian cucumber salad and bed of rice pilaf.

Ample slices of herb-roasted loin of pork are saved from being dry by a Dijon mustard sauce and the gravy on the mashed potatoes. A dab of apple chutney enhances the flavor. The most interesting side dish is a mound of chips called sweet potato tangle.

An inventive appetizer features shrimp and crayfish, both of which are sautéed in a spicy Cajun butter and served over crispy garlic cheese-grit cakes.

Another pleasing appetizer is coconut shrimp, which offers three choices of dip — honey mustard, cocktail sauce and — the best — strawberry.

All of the desserts, which are $6, are big enough to share. You can't go wrong with the old-fashioned hot fudge cake, in which warm brownies are topped with vanilla ice cream, fudge and whipped cream.

To get the maximum enjoyment out of an evening here, check your politically correct and trendy thoughts at the door.

It is, after all, called The Tobacco Company. Over the years, the management has made some concessions to nonsmokers. The sprawling first floor bar and lounge remain a smoker's haven, but upstairs most of the area is smoke-free. If you stick with good old American food fare, and don't mind the occasional whiff of smoke that wafts from the semienclosed rooms that ring the floors, this can be a fun night out.

And even if you don't smoke, you might want to tuck a dollar bill on the tray of the young lady in a black miniskirt who patrols the floors calling "Cigars, cigarettes."

Consider it a contribution to a fading way of life. S