Bust of President Barack Obama is missing from Williamsburg farm 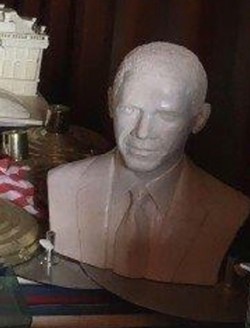 Well, not the real president. A 50-pound concrete bust of him.

The bust was last seen in a trailer on a farm owned by Howard Hankins, who also owns 43 larger concrete president's busts, each weighing 15,000 to 20,000 pounds. They range in height from 15 to 20 feet tall.

"The trailer has been open for the last five or six years so people could go in and take pictures with it," Hankins said. "There are books in there that people can take, but nobody's ever messed with Obama."

Hankins said some pictures might also be missing from the trailer, but he hasn't had time to inventory everything inside.

A miniature White House was also in the trailer and is OK.

Hankins said he doesn't know what the original owners of Williamsburg's Presidents Park, which closed in 2010, paid for the Obama bust. "That's not the point."

He said he hasn't had time to file a police report.

"We got the word out a couple of days ago and people know it was taken," he said. "Hey, somebody is going to see it, so you might as well return it. Take it anywhere and leave it, everybody knows who it belongs to."

Hankins said he won't press charges if the bust is returned.

Richmond photographer John Pleshal has organized a walking tour of the heads this Saturday from noon to 4:30 p.m. Tickets are $20. It might be the last time the busts can be seen in the Williamsburg area, as Hankins said he has a deal in the works to move them somewhere north.

"I can't say when and where just yet, but the guy who is running the project really wants them," Hankins said. "We'll make a big announcement when the deal goes through and then start fund raising to pay to get them moved up there."

Hopefully Obama will be back to make the trip.