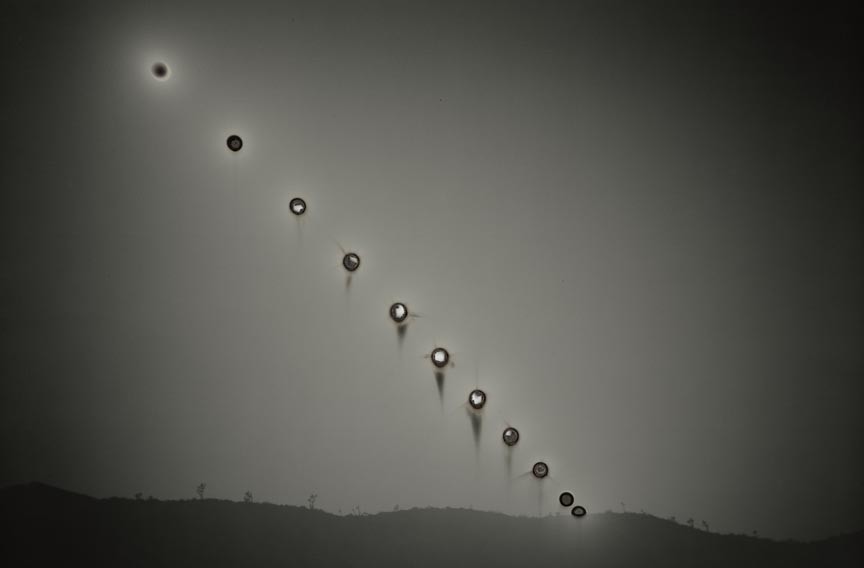 It began with failure.

On a camping trip in 2003, Chris McCaw set up his camera to capture an all-night exposure of the stars. He drank too much whiskey and didn't get up in time to close the shutter. In the morning, he discovered the sun had destroyed the image, leaving a mangled, warped piece of film. He liked it.

McCaw first tried printing film that had been burned from extended exposure to the sun. But this had been done before, and it didn't satisfy. "It was a generation removed from the charring, the ash, the cooking of the gelatin," he says.

For three years, McCaw experimented with different methods of capturing the sun. He began using vintage, gelatin-silver photographic paper instead of film in his hand-built, oversized cameras. Eureka: The paper itself was scorched by the sun, leaving burnt holes edged with iridescent ash. Despite the sun's implacable power, the surrounding landscape remained, ghostly yet distinct.

McCaw once spent three weeks in Alaska, seeking to capture the sun's sky-wide journey in a 24-hour exposure. To do this, McCaw had to drive spikes into the permafrost to hold his camera in place against the wind. He watched carefully while the sun traced its path across the paper. As it reached the edge, he had just five to 10 minutes to pull out the film-holder, change the paper in his light-tight van and reposition the camera to put the sun on the other side.

On one attempt, McCaw did this for 17 hours before thick clouds rolled in, forcing him to abandon that exposure. "You've got to work for these guys, if you want them," he says. Success looks like the 10-foot-long, 13-panel piece that shows the entire arc of the Arctic sun as it blazes upward and then swoops down to the horizon.

Gordon Stettinius, founder of Richmond's Candela Books and Gallery, first saw the San Francisco photographer's work about two years ago. "It was mind-blowing," he says. And puzzling, too. How had McCaw achieved such subtle images? "Just nobody had done it before," he says.

Stettinius wanted to capture that rawness and subtlety in a book. "Sunburn" will be the third volume published by Candela Books, the publishing house Stettinius founded in 2010 to document the work of well-respected photographers. The book will be unveiled Sept. 7 as McCaw's work goes on display at Candela Gallery.

McCaw's process is one of poignant destruction. The vintage papers he uses, most from the 1970s and '80s, represent a vanished age of black-and-white photography. He scorches them without remorse, even relishing the faint smell of roasting marshmallow the gelatin emits.

One day McCaw will run out of paper. He's already down to eight sheets of his favorite 20- by 24-inch material. And when that day comes, he says, he wants to end the series with a bang. He's thinking about taking his largest hand-built camera out one last time and taping a fuse to the paper. He'll sit there and watch the sun rise, as he has so many times before — until the fuse goes off. S

"Sunburn: Photography by Chris McCaw" opens Friday, Sept. 7, at Candela Books and Gallery, with an opening reception and book release party from 5-9 p.m. The exhibition continues through Oct. 27. For information, call 225-5527 or visit candelabooks.com.