Xu Bing's "Tobacco Project" at VMFA billows across the ages. 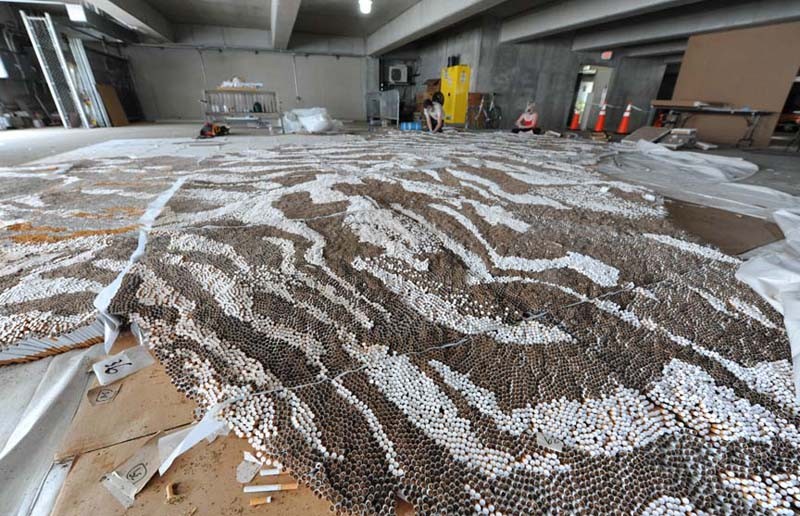 Contemporary art has incorporated nonartistic materials ever since surrealism grew out of Dada in the World War I era. Picasso pioneered the collage technique; Rauschenberg was known for his willingness to experiment with non-artistic materials. But an entire exhibition — "Xu Bing: Tobacco Project" — of cigarette tins, reproduction tobacco labels, live and dried tobacco and 500,000 cigarettes used in the show's piece de resistance, a 40-by-18-foot tiger carpet, might seem over the top.

And perhaps it's a reminder that tobacco dominated Virginia's economy for more than three centuries. The United States still ranks fourth in the world in tobacco production, while China ranks first. A connection between the two countries is the artist, Xu Bing, a Beijing resident and vice president of the China Central Academy of Fine Arts, who lived in New York for a decade.

Xu Bing takes the use of nonartistic materials in art to a new level. Like many contemporary art installations, the tiger's coat is large scale. Another attribute of contemporary exhibitions is its collaborative nature, according to John Ravenal, the museum's curator of modern and contemporary art. Current and former Virginia Commonwealth University students worked on the Tobacco Project under Xu Bing's direction. Through his assistants the artist maintains control of the aesthetic just as artists did in medieval guilds and Renaissance workshops.

"It's about art as vision, but it's not all about the artist," Ravenal says. "Xu Bing doesn't necessarily need to fabricate every object for it to reflect his vision. This is in keeping with the general movement over the past 30 years away from the markers traditionally associated with high art, such as individual expression and the display of technical virtuosity. Xu Bing's work is often site-responsive. In some cases, he doesn't know what he'll make until after he's visited a location and done follow-up reading and archival study. This was the case with our exhibition, and the reason for his research visits in 2007, 2008 and 2009."

Xu Bing's research on Virginia's historical connections to tobacco took him to several central Virginia venues (see sidebar) as well as to private tobacco farms and warehouses and the Philip Morris Manufacturing Center. The research, combined with his materials-based background, led to the use of tobacco in many forms — living in a pot, dried to form a book and compressed tightly enough into a 440-pound block for the text, "Light as Smoke," to be embossed upon it.

His creations bridge ancient Chinese traditions across time with international contemporary art. One of the show's highlights is a 40-foot-long reproduction of an ancient Chinese landscape painting on a scroll that will have a 40-foot-long cigarette burned down the length of it. That burning, to take place before the exhibit opens, according to Ravenal, is "about the scar, the ash that's left on the landscape after the burning" — an example of Xu Bing's exploration of tobacco's impact on world trade and human culture. The impact also has been personal; Xu Bing's father died of lung cancer.

Xu Bing's work relates to gallery visitors in a direct, language-based approach, predominantly English. An example is the poem printed on cigarette paper composed by one of the exhibition's sponsors, René Balcer. The father and grandfather of Balcer's wife, Carolyn Hsu-Balcer, a former museum trustee, worked for Standard Commercial Tobacco and Universal Leaf; it was her friendship with Xu Bing that gave impetus to the exhibition. Her husband's poem, "Backbone" — composed of words from stenciled labels used by tobacco farms — is a tribute to the black women who picked tobacco. It's been set to music and can be heard by searching "backbone" and "captain luke" at iTunes (available to purchase for 99 cents).

Locating a source for 35,000 packs of cigarettes for the tiger coat was a logistical challenge for the exhibition. A North Carolina source provided, at wholesale cost, the packs of 1st Class, a discount brand. The upright placement of the cigarettes' filter ends creates the orange in the tiger's coat, and the ignition ends create the white. The orange in the tiger's coat appears to become brown as visitors walk around it in changing light.

Xu Bing will return to Richmond before the opening, but he's been collaboratively fine-tuning from China, responding to photographs Ravenal sent of the carpet's possible orientations in the gallery once it's moved from the area of the museum's parking garage where it's been assembled. The sweet aroma of tobacco filled the garage space — and undoubtedly will waft through the exhibition continuing until Dec. 4: A half-million cigarettes are lots of tobacco. S