HBO has a winner with it’s new dark comedy, “Enlightened” 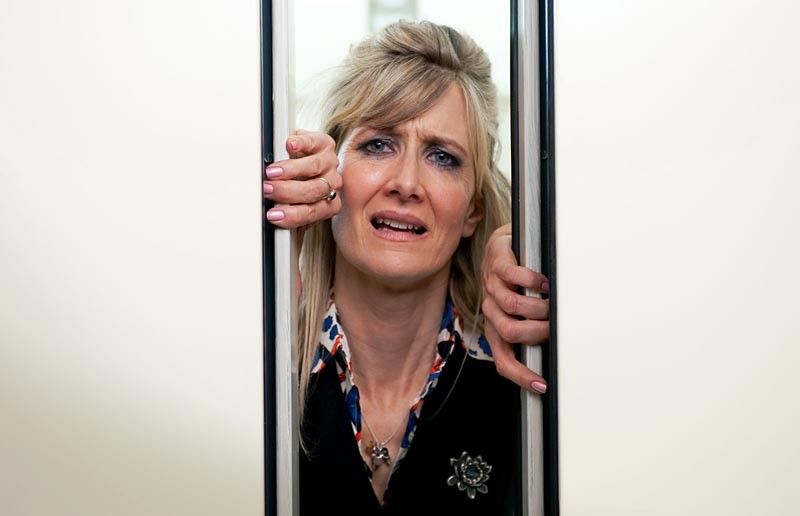 Strong women characters have found a home on HBO and Showtime.

First we had Edie Falco, a fireball in both “The Sopranos” and “Nurse Jackie,” then the cool Laura Linney as a strong-willed cancer patient in Showtime’s “The Big C.” Now add to that exalted lineage Miss Intensity herself, Laura Dern, as the unhinged Amy Jellico in the darkly humorous send-up of self-help culture and the modern workplace, “Enlightened” (Mondays at 9:30 p.m. on HBO).

Some reviewers have complained that the series isn’t sure whether it is a comedy or drama -- each episode contains laugh-out-loud moments as well as cringe-worthy scenes of desperation and embarrassment. For my money, the lack of a formulaic approach is a great strength. So far the series has been an exceptionally written and acted black comedy, the kind likely to appeal to fans of the satirical film director Alexander Payne (“About Schmidt," “Election," "Sideways").The 30-minute show also looks and feels more like a gorgeously shot film, with timing that should resonate with younger generations disappointed in the harsh realities of corporate culture.

Not surprisingly, Dern is superb as a former health and beauty sales executive who has collapsed into self-destructive behavior after an affair with her married boss. The wiry actress, who has famously suffered from real life depression and busted relationships (the latest with musician Ben Harper), created the role with writer Mike White, who also plays a stoic computer nerd whom her character is demoted to working alongside after returning from her nervous-breakdown rehab in Hawaii.

In scene after scene, Dern effortlessly flips the emotional switch from idealistic New Age flake to channel the savage ferocity of her big-browed, actor father, Bruce Dern. Remember when he screamed at Jane Fonda in the climactic scene of “Coming Home”? Dern starts this series at that pitch of inner rage, screaming at her ex-lover while literally pulling apart the doors of an office elevator, her running mascara like war paint.

In the series premiere, she returns to her job refreshed, believing she is a new and better person, one committed to making the world a better place. Unfortunately, life is still cruel: Her former coworkers shun her as a nut job and she is banished to a bland computer department filled with assorted clowns and sickly bottom feeders. She is the office crazy lady who doesn’t seem to realize that her newfound environmental idealism is unwanted -- a former “it” girl discarded into the adult version of “Freaks and Geeks.”

Is there any lingering doubt that Dern is one of the greatest sobbers in film history? She definitely gets an opportunity to turn on the waterworks here -- when she isn’t yelling lines such as “Oh, suck a sick dick!” after spilling coffee on herself at breakfast with mom.

To make matters worse, her ex-husband, played with stony perfection by actor Luke Wilson, is still snorting bumps of coke and his coffee table looks “like a Mexican pharmacy” as Dern puts it. She continually reaches out to him for moral support, but their beaten relationship seems headed for more scarring and perhaps a striking revelation from the past. There’s also the overbearing mother, wonderfully played by Dern’s real-life mom (Diane Ladd), and their nip-and-tuck relationship provides plenty of comic relief -- just like it did in David Lynch’s “Wild At Heart” -- though less bizarre and more recognizable here.

Still, Dern pretty much is the show and her gutsy acting lends her whiny character an unexpected resiliency and depth. After suffering the worst kinds of public humiliation at work, she is forced to start over from scratch, truly examining what kind of person she has become -- not the sort of info you can easily find in any self-help book.

Show times and information, an be found on HBO.com.