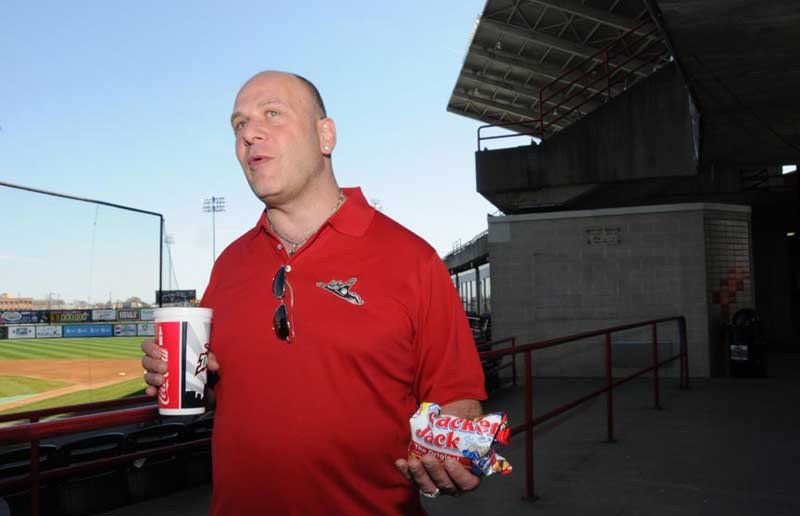 The Richmond Flying Squirrels are getting hotter — and not just because they’re heading to Dallas next week.

Agenda, please? “The status of the existing facility and the future of the Richmond Flying Squirrels, about where things stand in my view,” DiBella says. “Also, we’ll have a conversation to explore what other options might be available to the Flying Squirrels in the future.”

DiBella is careful not to say it. Yes, the team loves Richmond. Yes, he expects the Squirrels to remain in Richmond for the foreseeable future. But the clock is ticking. When the team moved here three years ago from Norwich, Conn., it was “promised” a new stadium, DiBella says: “It’s no secret that I’m somewhat frustrated.”

But the tough economy and a potent mix of local politics has complicated matters. Mayor Dwight Jones is preparing a site next to The Diamond on the Boulevard for a new ballpark — environmental remediation and whatnot — but the real obstacle is money. A new stadium is expected to cost between $40 million and $50 million, and the city wants Henrico and Chesterfield counties to pitch in. They’ve agreed, in theory, to help pay for a new ballpark — just not now.

“Before we commit to new costs, we need to get on a stable financial footing,” says Chesterfield County Administrator James Stegmaier.

Henrico County Manager Virgil Hazelett, who has expressed the county’s support for a new ballpark on the Boulevard, is dealing with a $70 million financial deficit. He too has suggested the money isn’t there right now.

Also snaking its way into the discussion is the city’s expected infusion of $62 million from the Richmond Metropolitan Authority, which is paying back old debts. The authority is expected to cut a big check to the city by year’s end, but the mayor is putting off a discussion on how to spend the money until after the 2012 election.

The Squirrels, however, want to see progress on a new stadium within the next few months, paving the way for a heated showdown with City Hall by early spring. For its part, the city is preparing to spread the blame around.

“Baseball and the Squirrels are an enhancement to the entire region. Clearly the attendance bears that out, where close to two-thirds of the attendees are from the counties,” says David Hicks, senior policy adviser to the mayor. “We’ve moved forward on all of the things that are on our side of the equation to move forward on.”

“How they spend that $60 million will send some strong signals as to what the city’s priorities are,” Stegmaier says. “Oh, by the way, most of that $60 million comes from Chesterfield County residents. … Think of how much money they’d have if the other jurisdictions had to pay tolls to come downtown?”