Trash punkers Sick Bags found a way to get grittier and slimier — minus the booze. 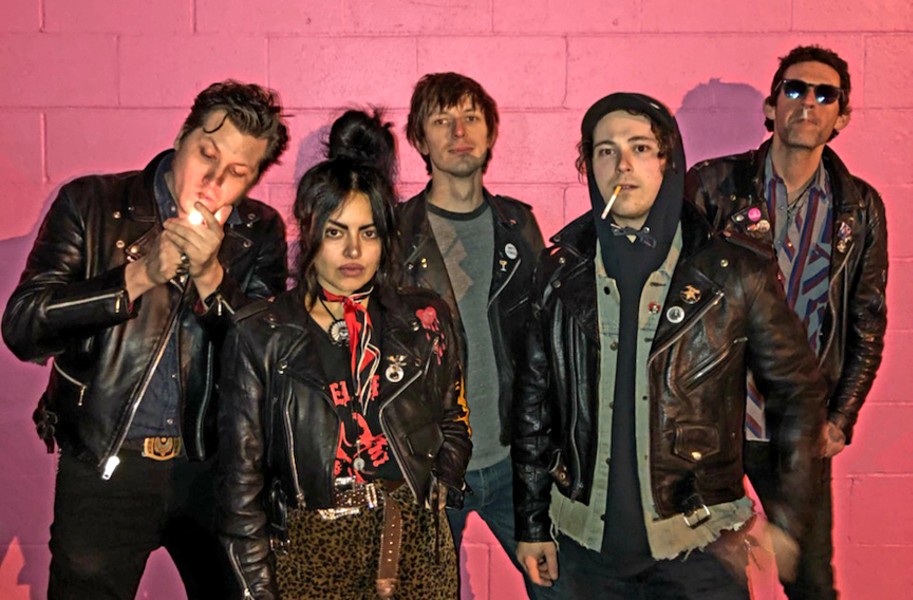 Appearances can be deceiving. Look no further than Richmond trash punkers Sick Bags for proof. Leather clad and full of piss, vinegar and raucous energy onstage, the outfit might come off as a little snotty to some.

Members hardly sound like a band whose current lineup just played their first show in September. The songs are tight, the riffs solid, and performance fierce. Sick Bags pack a punch thanks in large part to the Karen-O-like presence of Medina and the writing chops of Leet.

The self-proclaimed "family with plenty of sibling tension and a little stupidity" is quick to admit bad habits and celebrate each other's talent. Leet, a veteran of the local scene who played in bands like Dirty Fingers and the Ladies, returned from a stint living in California where he spent time writing lots of songs but couldn't find anyone to play with him. He even had a name picked out for the band.

"I was watching a report about bootleg merchandise at Prince William's wedding, in this case, sick bags with crudely drawn pictures of the bride and groom," he recalls. "The reporter called them royal sick bags." Back in Richmond, he convinced Sick Bags' original lineup to give it a go with one ask: a female singer.

"I always sang in bands and wanted to do something different, in this case, play guitar. I'd never been in a band with a woman," Leet says. Mutual friends suggested Wild Mel, originally from Los Angeles. Bassist Tommy Nelson, drummer Anthony Manuel and Paul Kirk, "a total shredder on the guitar" according to his bandmates, rounded out the five piece.

Their first show found Mel where she feels most at home — the center of attention — in this case, on top of the bar singing her heart out.

"This is my first band, so I looked at what ladies like Joan Jett and Suzi Quatro were doing," she says. "I love it when all eyes are on me, even though Paul does try to get in my way," says Medina with a laugh.

After she quit drinking, she was a little shy and says it was an adjustment to her performance style. "That was a big part of who I was when I was out. I mean, that's why someone suggested I might even be a good fit for the band."

She has since proven that it's a fire inside that fuels her stage show, not the booze.

Leet ditched the bottle a few years ago too and says it's given him more clarity and fewer complications. "All of the mistakes I made were due to bad-behavior excess," he says.

He recalls how he and his drummer once blew all the money they made on drugs after the show. "I feel like I'm better able to do the band now, it's exciting now, but it was scary having not been sober on stage my entire career," Leet says. "My idols were idiots, alcoholics and junkies. That's probably why I went so hard. I'm too old to go to jail now."

The band recently released "Cigarette Spit," a frenetic three-song 45 and is getting back into the studio shortly with hopes of at least two more 45s in addition to some tracks on compilations similar to ones it has done in the past such as "Typical Girls, Volume 3" that featured the likes of legendary LA singer and author, Alice Bag of the Bags.

"This lineup's sound is a lot grittier and slimier," Medina says.

The band will bring that vibe to its first Richmond house show soon.

"Losing Strange Matter was a kick in the nuts, not so much because we played there often but I've played and gone to shows in every incarnation of that place," Leet says. "But people in Richmond will always find a way to see live music go down. Always."