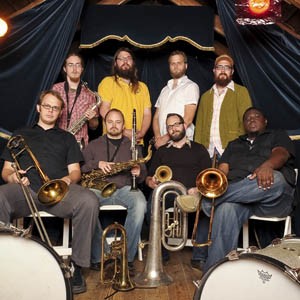 When one of your musical heroes calls at 2 a.m. to tell you he loves your new record, you know you're doing something right. Matt White, guitarist and composer for the adventurous local jazz ensemble, Fight the Big Bull, got the late night call last month from his mentor, Steven Bernstein, a New York jazz fixture and acclaimed trumpeter, producer and composer who has played with people as varied as the Lounge Lizards, Aretha Franklin, Lou Reed, Digable Planets and Levon Helm.

“He was so happy for me. I told him I hoped other people like it too,” White says of the group's recent folk-infused album with San Francisco singer and songwriter David Karsten Daniels, “I Mean to Live Here Still,” which interprets the poetry of Thoreau. “[Steve] said, ‘none of that other stuff matters. The most important thing is that your craft is getting better.'”

White, 28, has little to worry about from critics. The band is scoring great intimate gigs in major markets and has become a darling on National Public Radio, which streamed the entire album upon release. There have been glowing reviews from Pitchfork.com and Time Out Chicago (The New York Times called it a “roustabout little big band from Richmond”) while collaborative work continues to flourish with interesting twists. The band is now preparing to kick-off the Duke University Performances concert series in Durham, N.C., by recording a three-night stand of music inspired by songs from legendary folklorist Alan Lomax's influential “Sounds of the South” recording — the same musical touchstones that inspired the highly successful Cohen Brothers soundtrack, “O Brother Where Art Thou.”

The band was asked to perform by the curators for the event, Durham psych-folk trio Megafaun, which also invited well-known indie star Justin Vernon (of Bon Iver fame) and up-and-coming vocalist, Sharon Van Etten — all of whom are old friends or former bandmates. White met the Megafaun guys three years ago while touring with the band the Great White Jenkins and they instantly hit it off.

“Like brothers from another mother,” he says. “I think this is going to work well because both our bands' primary source material is Southern black folk music, maybe more us than them. But we've done this on all our records, taking parts of Southern folk and making it our own — so it's not a stretch.”

“We think Matt's writing alongside the musicians in the Fight the Big Bull make for one of the more soulful and exciting groups making music,” Cook says via e-mail. “I am looking forward to the first time I hear Reggie [Pace] play the trombone.”

Lomax recorded these Southern songs — including spirituals, children's songs, blues — during an Atlantic Records-funded trip in the late ‘50s accompanied by his girlfriend, British folk singer Shirley Collins. “I had never heard the full recordings until a year ago,” White says. “They're tough to find.”

The concerts are being performed and recorded at Durham's acoustically superior Hayti Heritage Center, a deconsecrated African Methodist Episcopal Church that has been the site of recordings by Branford Marsalis and Harry Connick Jr.  Fight the Big Bull will be playing on stage with Megafaun the entire show and there will be roughly 13 concepts presented.

“Some are very traditional, others are taking specific bits of songs and stretching them out and recombining melodies,” White explains. “For example, there's the Almeda Riddle a cappella songs, Phil [from Megafaun] took all the nonsense words and portions of the melodies that all 11 of us are going to sing.”

Another highlight should be a Fred McDowell blues song the band is recreating with a “Muscle Shoals vibe.” White is not worried about upsetting purists, saying that he feels safe molding these timeless melodies. “Whether it's blues or New Orleans funk, jazz, all that music comes from spirituals, slave songs, Delta blues,” he says. “All folk music has that special thing because it's coming from a very honest place. It's pure.”

White isn't sure when the live record will be available (Bon Iver's personal staff engineer is recording it); but he is also sitting on some new tunes recorded with sultry K Records' singer Karl Blau that will likely be released as  7-inch or extended-play recordings.

Another teaser: White is planning on starting a local label called Spacebomb Records. In the mean time, you can catch Fight the Big Bull somewhat regularly at Balliceaux, or learn more about it on NPR's website. S

“Sounds of the South” featuring Megafaun and Fight the Big Bull with Justin Vernon of Bon Iver and Sharon Van Etten, will be staged Sept. 17-18 at 8 p.m. and Sept. 19 at 5 p.m. at the Hayti Heritage Center, 804 Old Fayetteville Road in Durham. For information, go to hayti.org.