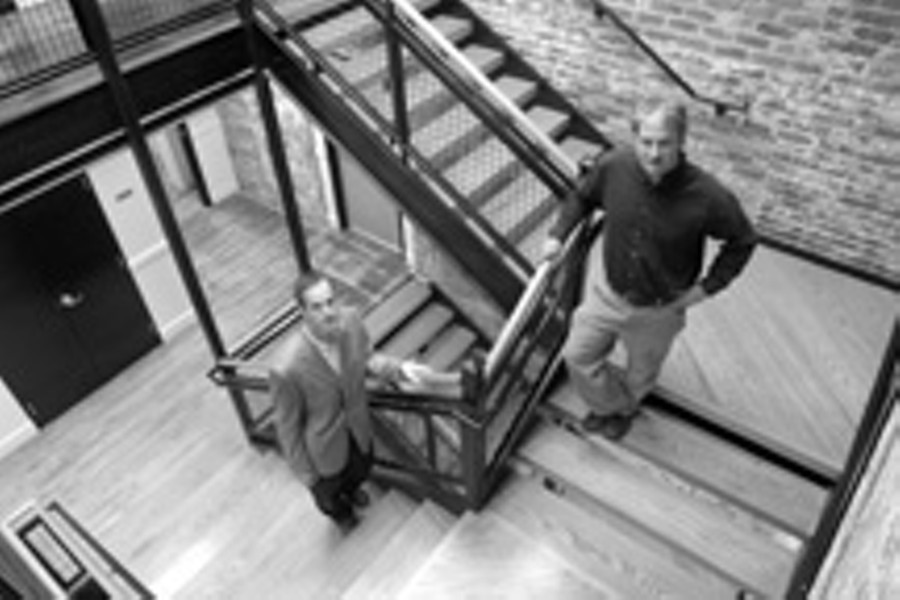 Now their work is done. The Alliance to Conserve Old Richmond Neighborhoods recently gave the Pohlig Box Factory its Golden Hammer Award for Best Commercial Renovation. The Pohlig building beat 10 other nominees in the category, including such prominent projects as Main Street Station and the One Monument Avenue condominiums.

"I'd say it is one of the best — it might be the best — antebellum warehouse still standing," says Jennie Dotts, executive director of ACORN. Nor did Stanley and Shield alter it too much in the conversion to apartments, Dotts says. At a recent gathering of renovators there, she says, "people were astonished at how much of the flavor of the building was still there."

The floors are heart pine in places, maple or stained concrete in others. Such artifacts as elevator cogwheels and massive sliding doors were reinstalled as decorations. Some of the apartments, which generally rent for between $800 and $1,200, are modern, while others feature lots of old sandblasted brick and exposed heavy beams. No two of the 65 apartments are identical, Stanley and Shield say, and 56 already have been claimed.

The original building, a tobacco factory, was built in 1853. Since then, it has been used as a Civil War hospital — in which about 300 men died, sparking spectral stories — the Pohlig Bros. Box Co. and a warehouse for Showcase, the department-store-inventory liquidator. The structure acquired 12 additions over the years, and Stanley and Shield's copper-sided rooftop apartments were the 13th. Bad luck? Well, Shield says, "no ghosts in that part yet."

They know of two possibly supernatural encounters since the building opened two months ago. One resident's young daughter woke up screaming in the middle of the night, Stanley says. "All she could say was 'Where did it go?'"

Was it just an ordinary nightmare?

Leasing agent Tracy Altman grimaces when you ask her about what happened in her own Pohlig apartment. "I don't believe in that kind of stuff," she says firmly. But Altman says she did see "a very distinct figure" of a man walking through her hall toward the bedroom, with his hand on his head.

"Get out of my door," she shouted — and the figure disappeared. — Melissa Scott Sinclair