The Hippodrome reopens, VCU spreads out and regional architecture gets its due. 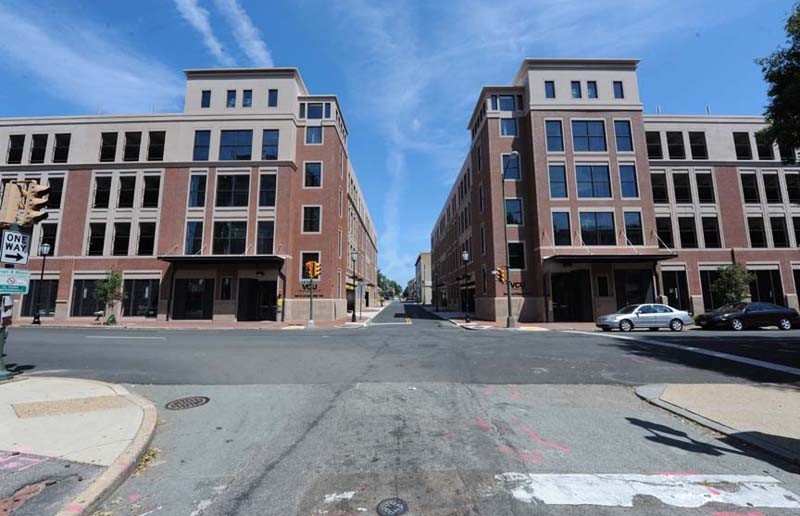 We locals have grown immune, but visitors to town inevitably comment on how Virginia Commonwealth University is spreading its tentacles. And this fall it's evident that another stretch is being transformed: the West Grace Street corridor in the blocks immediately east and west of Belvidere Street.

Two impressive, four-story parking decks have just been completed in Monroe Ward, on the downtown side of Belvidere. Designed by SMBW, they're well-tailored, using a light classical vocabulary of red brick and stone trim. Wisely, the ground levels have been designed to be converted to retail space if and when demand develops.

On the western side of Belvidere, two sprawling new university buildings extend from Laurel to Shafer streets where the university is establishing a residential zone. The parking garage with retail at ground level, and the five-story Grace Street South Apartments were designed by the firms of nbj Architecture and WDG Architecture.

A few blocks away in Jackson Ward, the Hippodrome Theater has reopened as a music venue after a major restoration. Long empty, this art deco landmark — where Louis Armstrong and Ray Charles once played — is ready for a new generation of music makers. Nearby, another landmark theater, the Empire (home of Barksdale and Theatre IV) marks its 100th anniversary in December, making it arguably one of Virginia's oldest playhouses.

Two major architecture exhibits are scheduled at the Virginia Center for Architecture on Monument Avenue. "Design 2011," opening Oct. 20 and running through the holidays, examines 20 award-winning projects by regional architects. And on Jan. 19 an exhibition featuring some 80 works by Williamsburg architect Carlton Sturges Abbott will be displayed. Among Abbott's signature Richmond works are the concrete bridge and staircase in James River Park and Paradise Park in the Fan District. "Flights of Fancy," an exhibition of architectonic and delicate assemblage pieces by Richmond artists Kirsten Kindler, will continue at the center until Oct. 9. Farther afield, the National Building Museum in Washington will offer "Unbuilt Washington," an examination of unfinished projects in our nation's capital from 1790 to the present. And on a somber note in lower Manhattan, the 9/11 Memorial, with Michael Arad as architect, opens to the public Sept. 12.

In the coming months expect debate to continue on land use and urban design issues surrounding the fate of the City Stadium, The Diamond, the former GRTC facilities on West Cary Street and redevelopment in Fulton.