After consulting patrons, bartenders and assorted experts in revelry, we present our plan to construct the perfect Richmond nightspot. 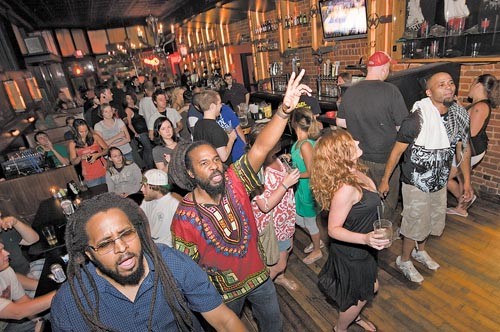 Clientele
The Republic
Our bar needs to be a place where patrons can co-exist with people outside of their peer group in a way that's not only comfortable, but also enjoyable. That's Republic. From the minute it opened it was welcomed by a group of Richmonders as varied as Fan rats, suits, hipsters, punks and the white guys who want to be black. Richmond's best meeting place for meeting just about anyone.

Liquor Selection
McCormack's Whisky Grill & Smokehouse
We gotta hire Mac McCormack. He's a liquor connoisseur. His motto seems to be if the ABC store sells it, he wants it. His handmade, absolutely stunning back bar lives up to the motto with bottles literally up to the ceiling (necessitating a ladder for some retrievals). Mac can usually meet any customer's liquor requests, regardless of how obscure. His whiskey selection alone is overwhelming. His blood smells like cologne. His bear hugs are actually hugs he gives to bears. He's never lost a sock.

Ambiance
Balliceaux
People say walking into Balliceaux reminds them of stepping into a Los Angeles bar. 'Tis true, there's little about the sleek design and the modern - although not nouveau or over-the-top - architecture that would remind anyone of Richmond. It transports you. The atmosphere, moody lighting and hip yet unfailingly polite staff is worthy of duplication.

Beer Selection
Mekong
Just how many kinds of beer are here? “Oh boy, we can't keep track now,” says Mekong's beer overseer An Bui. “Probably 200-plus.” That's what we need — beer, lots of kinds and lots of it, from a guy that loves it as much as we do.

Bar Food
Sidewalk
A heaping bowl of sour cream comes alongside a giant chicken quesadilla — not a dab, or a puny packet. You'll find gobs of cheese melted in there, or mixed in spaghetti, or atop pizza, or lighted on fire. Good stuff — and it comes out of the kitchen any time. As bartender Chris Jackson says, “We pretty much serve full menu up until 1:30.”

Bartenders
Star-Lite
There's a reason that Star-Lite consistently does a brisk bar business, and it's not because people actually enjoy packing in there like sardines. The bartenders now and the ones before them are the best, and this isn't up for debate. Tattoos, a smile and a shot for the road.

Smoking Options
Babe's
Sorry militant nonsmokers, our bar needs nicotine options. Like Babe's, where you can finish smoke No. 1 under the awning, light up No. 2 as you order your first round and relax with No. 3 while enjoying drunken volleyball on the deck. Just remember: The ladies don't take kindly to ash in their Jell-O shots.

Music
The Camel
The Camel is one of those rare animals: an energetic live music venue that also feels like a funky neighborhood bar. The sound choices are eclectic (showcasing everything from the best in local jazz to pensive singers and songwriters to exciting national alterna-rock) and the crowd is diverse and friendly (tattoos are welcome but not mandatory). The Camel is where Bill Murray hangs when he comes to Richmond — ‘nuff said.

Wine Selection
Secco
It may not be the biggest wine selection in town, but a list needs personality, like at Secco, which adds narrative and character to the choices. Whether it's Jerome's unlikely $35 rare Swiss beer or the $5 Spanish cava, the concise, Euro-focused list (and those who serve it) is neither stuffy nor predictable. Plus, the wine available by the bottle or glass. A neighborly adventure at affordable prices.

Also: Barrel Thief, and consult sommelier Bob Talcott at Can Can or Ben Eubanks at Lemaire

We still haven't been able to locate a good bar bathroom. But let's see what we can copy from the churrascaria Texas de Brazil at Regency Square Mall. Three words: marble, glorious marble. Because your drinks deserve respect going in and coming out.

Location
Lemaire
A minute from downtown, a minute from the Fan, a minute from Shockoe Bottom — and ample parking! A bar in Richmond (not South Side or the West End) that has ample parking! Don't even try naming another place that matches this criteria — you can't. So throw on your crested blazer, wear something orange to signify your affiliation with U.Va. or Tech and then use the comfortably elegant Lemaire as a jumping-off point for the night. Added bonus: hotel rooms.

Specials
Bar Louie
Forget happy hour. We want hours upon hours, like at Bar Louie, where it runs from 4-9 p.m. on Mondays, Tuesdays, Thursdays and Fridays ($2 domestic pints, $3 imports, $4 wine, $5 martinis). Why not Wednesdays? Cause that's when you can get $1 bottles of Bud. And don't get us started on the 35-cent wings Mondays or the $1-burger Tuesdays.

The X-Factor
Sticky Rice
We need unpredictability, a little danger, a little grime. Take Sticky Rice, where you get the fast-and-furious blingo, karaoke and trivia nights. Odd and oddly entrancing videos. Where you might see a guy down a raw egg before running around the block for some kind of prize, or a tie-breaking chow-off to see who can finish the ginormously greasy Kentucky Fried Chicken Double Down first. Good times, people, good times.