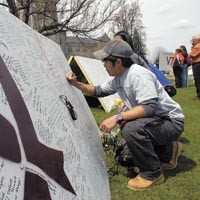 In January, mental health advocates and legislators put together a $42 million package to boost available emergency services, outpatient treatment and case managers — bread-and-butter mental health services. The dire financial forecast, however, has recently prompted Gov. Tim Kaine to ask the local boards responsible for providing those services — as well as support for the mentally retarded and substance-abuse victims— to cut their administrative costs by $12.5 million.

“It's going to be a challenge for our [boards] to unravel,” says Jennifer Faison, public-policy manager for the Virginia Association of Community Services Boards. Many clinicians are already multitasking, she says, and isolating administrative costs will be tricky.

The Department of Mental Health, Mental Retardation and Substance Abuse Services will have to tighten the belt too, says agency spokeswoman Megan McGuire. The central office in Richmond, she says, will leave 11 open positions empty and eliminate 32 others. The office of the inspector general will have to reduce its budget by $50,000, state hospitals and training facilities will lose $2 million and $20 million of special revenue will be transferred back to the state.

The cuts are not as severe as for other state agencies — the governor's plan calls for the Department of Corrections to close four prisons and lay off 330 people. But more could be on the way. Deeper cuts are expected in the 2009-2010 budget, which takes effect in July.
“I don't know what 2010 will bring,” McGuire says.