Buddy, Can You Spare a Mime? 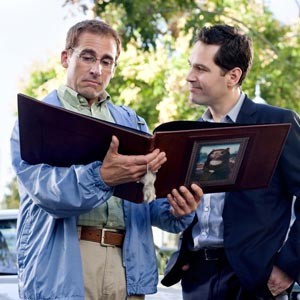 Dinner for Schmucks” is the kind of comedy that does everything wrong, and yet somehow turns out all right. But just all right.

The movie is so goofy it can win you over, but a major problem is star Paul Rudd, a completely uninteresting actor who seems perennially cast as a bland Everyman trying to hold onto a bland significant other (Lucy Punch) when he's derailed by a moron (Steve Carell). You've seen it all before; just rent “I Love You, Man” (2009) or “Role Models” (2008), or go further back into Rudd's prolific but repetitious career.

Here he plays the not-so-impressively-named Tim, who needs to find the ultimate buffoon for a company dinner where executives compete to bring the biggest idiot as their guest. Tim finds Barry (Carell), who plays dead when attacked, thinks Tim made up the phrase “things happen for a reason,” and believes his own boss (Zach Galifianakis) has mind-control powers.

The laughs keep coming despite a dearth of originality and the movie's inability to stick to its premise. The dinner of the title serves only as a closing set piece. “Schmucks” is mostly a buddy movie like “Dumb and Dumber,” with the ever-amusing Carell as the Jim Carrey character — right down to the hideous haircut. An over-inflated European artiste named Kieran Vollard (Jemaine Clement), who has a flair for dressing up like a satyr, provides over-the-top, Will Ferrell-type material. No real idiots were hurt during the making of this picture.

The actors who really stand out tend to get the least screen time. Galifianakis, from “The Hangover,” is a big hit. Others who deserve honorable mention include Ron Livingston, the veteran comedy actor who made a more memorable everyman as Peter Gibbons in Mike Judge's cult hit “Office Space” (1999). In his brief appearances as Rudd's character's rival, Gibbons creates a refreshingly honest corporate climber, a little loathsome and a little sympathetic. He would have made a better Tim, and “Schmucks” a better comedy. (PG-13) 110 min.