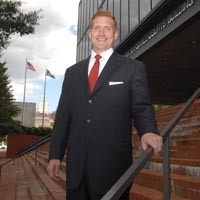 Charged with enforcing the law, Bryan Michael Rhode has his own rule to live by: the rule of 20.

That's how it is in Richmond, he says: "You can live 20 miles from the city, own 20 acres and still be to work in 20 minutes." A native of Northern Virginia, he's familiar with what could be life-wasting traffic woes. "Richmond's the perfect city," he says.

And he isn't just blowing smoke up Richmond's stack. He digs this place, he really does. As president of the Historic Richmond Foundation's Quoit Club, he's likely dug more of it than most of us. The social group tours the city's historic sites, eating, drinking and generally "making merry" all in the name of historic preservation.

An out-of-towner who settled here after a stint in the Marine Corps, Rhodes is as committed to helping the community as he is to sightseeing. He works with Richmond Public Schools students through a variety of programs. And he eschewed a cash-cow career with Hunton & Williams to become a prosecutor with the Richmond Commonwealth's Attorney's office.

Now he's cleaning up the town by literally chasing drug dealers out of their homes. Wanna buy a house? Bryan, who has pioneered the CA office's Drug House Program, which seizes the homes of drug dealers, may have a deal for you.