Bruce Hornsby at the National 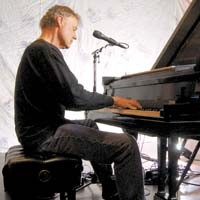 The piano has always been a difficult translator of modern pop music. For whatever reason, the guitar just overshadows it in terms of coolness, instigating all kinds of critical analysis for its best players and its most enduring riffs and solos. You won't find any magazines doing a commemorative issue on the best 100 pianists in rock, well, because you could probably count them on two hands. Besides Jerry Lee Lewis, Elton John and Billy Joel, obvious choices all, Bruce Hornsby deserves to be on the list. A native of Williamsburg, Hornsby first established his knack for heartland melodies and right-handed runs along the keys with his 1985 debut, “The Way It Is.” Delivering such standout tracks through the years such as “Mandolin Rain” and “The Valley Road,” Hornsby has spent more than two decades giving his own signature life to a cumbersome piece of equipment. Supporting the release of his latest record “Levitate,” catch Hornsby as he plays the National on Saturday, Oct. 3, at 7 p.m. $35. 612-1900. — Mike Hilleary