Brown Shoe at the Camel 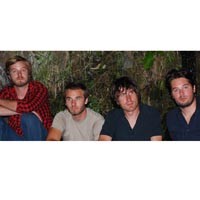 The reason behind Brown Shoe's name sits in clouds of mystery. But what's clear is its admiration for indie, atmospheric rock-pop groups such as U2, Coldplay and Sigur RA3s. The Folsom, Calif., foursome has prompted many promising reviews since the pop taste-makers at CMJ took notice in 2006. The group's dramatic crescendos and building rhythms have only strengthened on its latest album, “Jackalope.” Bringing some surprising, live raucousness with tour mates Alternate Route and Penny Shaker on July 24, Brown Shoe plays the Camel at 7 p.m. $7-$10. 643-2582. — Laura Robertson